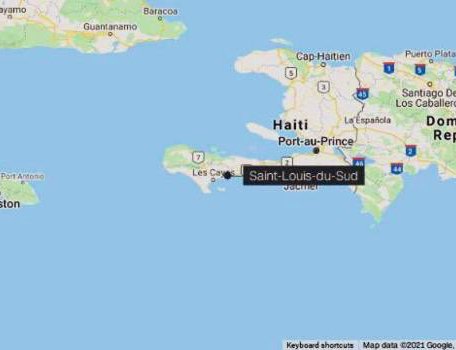 The US Geological Survey says an earthquake with a magnitude of 7.2 has struck western Haiti.

The magnitude 7.2 earthquake on Saturday quake struck 8km (5 miles) from the town of Petit Trou de Nippes, about 150 km west of the capital Port-au-Prince, at a depth of 10 km, the USGS said.

“I can confirm that there are deaths, but I don’t yet have an exact toll,” Jerry Chandler, Haiti’s director of civil protection, told AFP news agency. “We’re still collecting information,” he added.

Chandler said the country’s emergency operations center had been activated and Prime Minister Ariel Henry was headed there.

The USGS issued a tsunami warning, saying waves of up to three metres (nearly 10 feet) were possible along the coastline of Haiti, but it soon lifted the warning.

The long shock was felt throughout Haiti and in neighbouring Caribbean countries, and material damage was recorded in the southwestern peninsula of the island.

“Lots of homes are destroyed, people are dead and some are at the hospital,” Christella Saint Hilaire, who lives near the epicenter, told AFP.

“Everyone is in the street now and the shocks keep coming,” she added.

The country is still recovering from a magnitude 7 earthquake closer to the capital 11 years ago that killed more than 200,000 and injuring some 300,000 others.

More than a million and a half Haitians were made homeless, leaving island authorities and the international humanitarian community with a colossal challenge in a country lacking either a land registry or building codes.