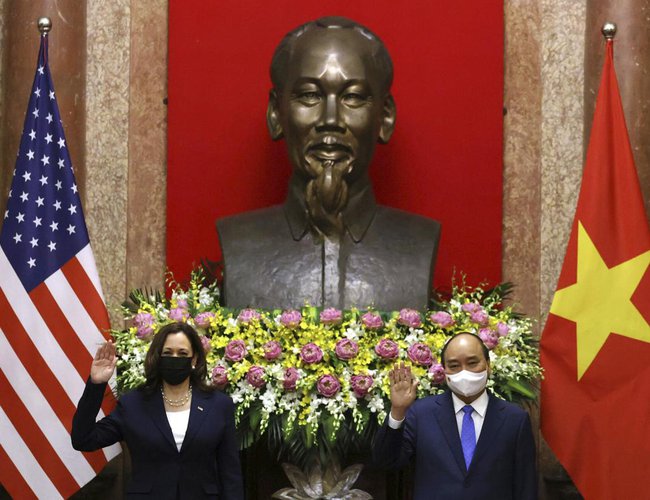 US Vice President Kamala Harris has underscored the need to pressure China on its actions in the South China Sea in a meeting with Vietnamese President Nguyen Xuan Phuc.

Harris held talks with Phuc in Vietnam on Wednesday. She was in the country after visiting Singapore.

In the meeting, Phuc said Vietnam is contributing to peace and security in the region and the world, and that the United States is an important partner. He added Hanoi wants to enhance cooperation with Washington.

Harris raised the issue of China's territorial claims and increasing military activities in the South China Sea. She said, "We need to find ways to raise pressure on Beijing to abide by the United Nations Convention on the Law of the Sea, and to challenge its bullying and excessive maritime claims."

Vietnam has overlapping claims with China in the South China Sea.

The administration of US President Joe Biden attaches importance to the Indo-Pacific region to counter China's influence.

Observers see Harris' tour of Southeast Asia as aimed at keeping China in check by boosting ties in the region.

Vietnam apparently wants to strengthen relations with Washington to keep Beijing's moves in check. But it is also expected to watch and see if the Biden administration can curb China's activities.

Western Allies Free Up Leopard 2 Tanks For Use In Ukraine By Agencies 23 hours, 51 minutes ago