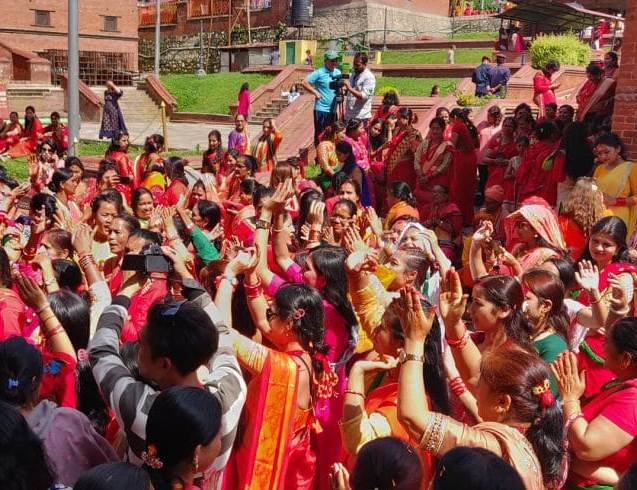 Hartalika Teej 2021: Here’s all you need to know about the date, history, significance and celebration of this Hindu festival in India in the monsoon season. This year the Teej fall on September 9. It will end on September 11 with Rishi Panchami. This will begin from today as a day of Dar Khane.

Occurring around the month of August, Teej is a festival celebrated by women all over Nepal for three days. Decked up in red sarees and red tika, bangles, women sing and dance to traditional folk songs for days. It is specially significant for married women, when they get a special invitation to visit their maternal home and feast.

Following a long feast also known as Dar, the women, sit for a 24 hour long fasting , where most do not eat or even drink water. What is fascinating is to watch women of all age group, young and old, dance for hours in the heat , rain, without a drop of water or food for an entire day.

It is a sight to behold at the Pashupatinath temple, where thousands of women draped in Red and green throng the premises of the temple. Observers can take photos of these women dancing merrily , where sometimes foreigners, especially women tourists are requested to participate in the merry-making.

The significance of such a festival is for women to ask for special blessings by Lord Shiva, to have attain a good husband in life, and to pray for his longevity and prosperity.

On the final day of this three day festival Women satisfy seven saints offering them food, money and various offerings, and also bathing with Red mud and brushing their teeth with Datiwan (branches of a bush tree) hoping this purifies their body and soul.

Hartalika Teej comes on the third day of the full moon in the Hindu month of Bhadrapad. This holiday marks the beginning of monsoon season in Nepal. The date varies on the Gregorian Calendar.

During this festival, women fast and pray for the health and well-being of their husband and family. Young unmarried girls pray that they will someday enjoy a happy marriage. There are also many special events for Hartalika Teej, which span across three full days.

On day one, women dress in red or in bridal gowns and gather for a time of merrily singing and dancing. They feast all day until midnight, at which point, the fasting of day two begins. They don’t even drink one sip of water all day long and spend much time visiting temples of Shiva. At night on day two, a lamp is kept lit all night. Then on day three, they bathe in red mud that is believed to remove from them all sins.

Celebrated on the third day of the bright half of the North Indian lunar month, Hartalika Teej is one of the three Teej including Hariyali Teej and Kajri Teej that are celebrated throughout India by Hindu women. The Indian monsoon brings along with it this most popular Hindu festival which is celebrated in the Indian states of Rajasthan, Madhya Pradesh, Haryana and Uttar Pradesh.

According to mythology, Goddess Parvati’s friend had once taken her into a forest so that her father would not be able to marry her to Vishnu against her wishes. Parvati requested her friend to kidnap her after her father, Himalaya, promised her hand in marriage to Vishnu.

Parvati wanted to save this marriage from taking place since she had performed severe austerity along the banks of the river Ganga to have Shiva as her husband. After the planned abduction, Parvati performed penance in a thick forest and immersed herself in the adoration of Shiva for many years.

Being an ascetic, Shiva did not know about her before but he finally took notice of her devotion. Appearing before her in his divine form, Shiva agreed to marry her.

The word Hartalika is derived from ‘Harat’ and ‘Aalika’ which means ‘kidnapping of a woman friend’. Hindu devotees believe that it was on the day of Hartalika Teej that Shiva accepted Parvati as his wife after her 108 re-births.

On this day, married Hindu women observe Nirjala Vrat or a fast where they neither eat nor drink throughout the day. Seeking the wellness of their husband, children and their own self, the women fast for day long.

The devotees pray to makeshift statues of Parvati and Shiva for marital bliss, harmony and progeny to mark the festival since it is dedicated to Parvati’s reunion with Shiva as per Hindu mythology. The prayers are performed during a special time period where the morning period or the Pratahkal Hartalika Puja Muhurat is supposed to be auspicious for offering prayers to Parvati.

Two Shilas Left For Ayodhya From Janakpurdham By Agencies 5 days, 20 hours ago