MCC Would Reach To A Conclusion On Political Consensus: Minister Bhusal

MCC Would Reach To A Conclusion On Political Consensus: Minister Bhusal 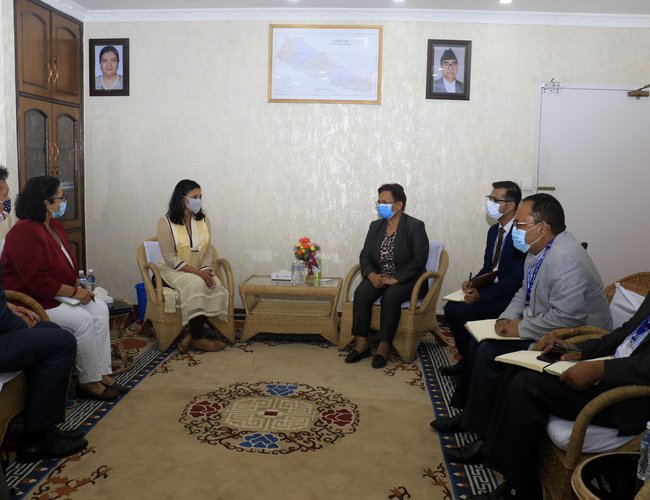 Minister for Energy, Water Resource and Irrigation, Pampha Bhusal said the persisting mutual relations between Nepal and the US has been strong and they would reach to a conclusion on MCC on political consensus and people’s aspirations.

At a meet held at Ministry of Energy, they had a discussion around sustainable economic development and implementation of MCC project.

Matters related to expansion of road network, construction of electricity transmission and the implementation of a grant of Rs 50 billion to be received from the US for the execution of the infrastructure development project in Nepal were discussed between the two on the occasion, stated in a press release.

Noting that the MCC Compact was signed at the request of Nepal for mitigating poverty level and propelling sustainable socio-economic development of the country, Sumar urged the Minister to support in the implementation of the project. The MCC Vice-Chair had expressed concern on the issues being flared up in Nepal in regard to MCC.

Also present on the occasion were the high-ranking officials of Ministry of Energy and Ministry of Foreign Affairs on behalf of Nepal, and US Ambassador to Nepal, Randy Berry.

It may be noted that MCC on behalf of the US government and Ministry of Finance, Nepal had signed a memorandum of understanding on MCC implementation in Nepal.