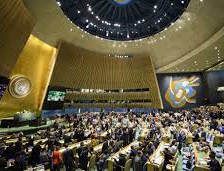 The annual General Debate of the UN General Assembly closed Monday. But no one from Afghanistan addressed the gathering. It is unusual for a government not to deliver a speech at the assembly.

Leaders and representatives of more than 100 countries gave speeches. A delegate from Afghanistan was due to speak on the final day, but withdrew.

The Taliban took power in Afghanistan last month and is seeking international legitimacy. The Islamist group had asked the UN to allow the Taliban official in charge of diplomacy to address the gathering. They also notified the world body they had nominated a UN ambassador.

Meanwhile, the current accredited Afghan ambassador had earlier informed the UN Secretary-General that he is still at his post.

A UN committee will discuss who will represent Afghanistan at the world body, and the General Assembly will make a final decision.