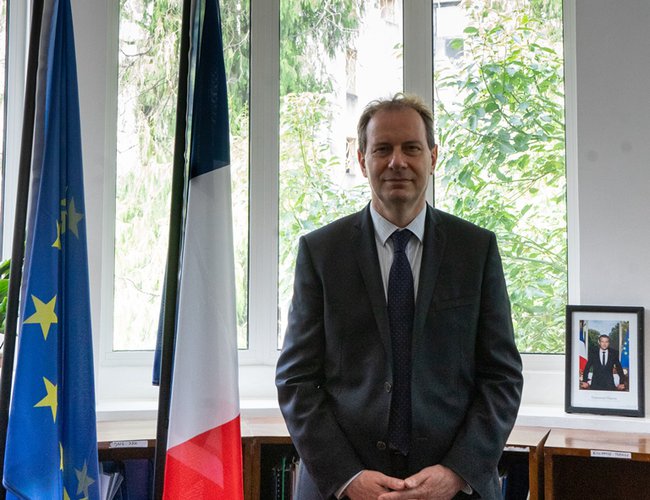 The new French Ambassador to Nepal Gilles Bourbao presented his letters of credence to President of Nepal Bidya Devi Bhandari, earlier today at an official ceremony organized at the Office of the President.

On the occasion, Ambassador Bourbao said, “It was an honour for me to present my letters of credence to the Right Honourable President of Nepal today. I look forward to engaging with the Government of Nepal and with our Nepali friends from various walks of life to further strengthen the relations between our two countries which are ancient and built on trust.”

Before arriving in Nepal, Ambassador Bourbao was the Deputy Director for Financial Affairs at the French Ministry for Europe and Foreign Affairs.

Ambassador Bourbao has earlier served in Fez (Morocco), in Delhi (India), in Islamabad (Pakistan), in Baghdad (Iraq) etc. to name a few in various capacities.

Ambassador Bourbao is a career diplomat who began his diplomatic career in 1990.

He has been decorated with a Knight of the Legion of Honour, Knight of the National Order of Merit and speaks English, Spanish, Maghrebi Arabic, and Oriental Arabi