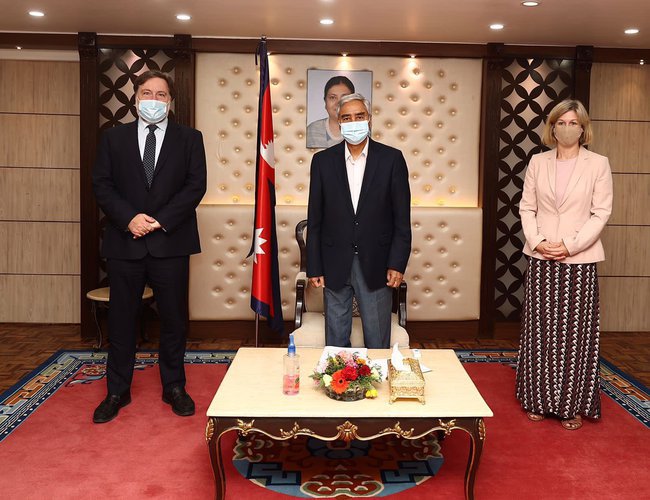 For a country like Nepal, which is highly vulnerable to climate change, the only way out is urging the global community for implementation of the Paris Agreement and following it through.

This year COP26 is going to be a major event for the global community. Suffering from COVID-19 pandemic and many unusual natural disasters this year, nations around the world have a growing realization about the need to stick to the goal of maintaining temperature rise below 1.5 degrees Celsius.

Prime Minister Sher Bahadur Deuba has said that Nepal is committed to limit the global average temperature rise to 1.5 degrees Celsius as per the Paris Agreement.

During a meeting with a delegation led by COP26 Regional Ambassador for Asia-Pacific and South Asia, Ken O'Flaherty, PM Deuba opined that there should be international commitment to limit the global average temperature rise to 1.5 degrees Celsius.

Deuba clarified that the immense potential of hydropower and forest areas, among others, would help Nepal implement the Paris Agreement to reduce carbon emission by 2050.

The PM mentioned that being a mountainous country, Nepal is at high risk of climate change and the damage caused due to climate change should be addressed internationally.

Joint-Secretary at the Foreign Ministry, Nirmal Raj Kafle, said that PM Deuba emphasized discussion over various issues including priorities of COP26, climate finance and adaptation as well as additional support for Nepal to strengthen its ability to respond and adapt to climate change.

Regional Ambassador O'Flaherty responded that a separate British agency had been analyzing various situations of Nepal from time to time and reviewing them to do the needful to remove Nepal from the Red List.

Expressing concerns about the current affairs of Nepal and the preparation for COP26, O'Flaherty said that he was hopeful of Nepal's active participation in the 'Global Leader Summit' to be organized by the British Prime Minister from November 1-2 this year.

COP26 will be held in Glasgow in the UK from October 31 to November 12. Leaders from 197 Conference of the Parties (COP) member-countries, including Nepal, will convene in the climate conference to advance global efforts to deal with the challenges of climate change

PM Deuba will participate in the Global Leader Summit where he is scheduled to address the event.

Mountainous region's issues to be prioritized in COP26

Nepal will shine a light on the issues relating to how climate change had affected the mountain economy and ecosystem and ecology of the mountainous regions and the lowland areas.

There were cases wherein the temperature in the mountainous region in Nepal recorded 1.5 degrees Celsius while world temperature measured 1 degree Celsius, according to the latest study.

Preparations were underway to raise voices about issues of climate change impacts, carbon finance and searching resources for the implementation of the Nationally Determined Contributions (NDCs) report in the convention, said the Ministry of Forests.

Nepal along with various member countries has in December 2020 submitted the NDCs report which mentions the implementation of its roadmap to reduce green gas emission to zero until 2050 as per the Paris Agreement struck in 2015. Issues of managing resources required for the implementation of the report would be a priority in the conference, said Chief of the Climate Change Management Division under the Ministry of Forests, Dr Radha Wagle.

Although the conference is organized every year, it could not take place last year due to COVID-19.

COP27 Extended For A Day By Agencies 2 weeks, 1 day ago