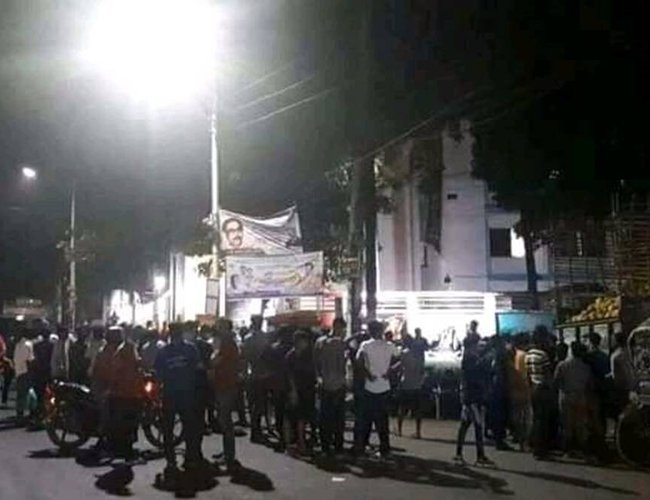 Violence erupted after an alleged blasphemy incident at a Durga Puja pavilion in Cumilla, bordering Chandpur and about 100 km from Dhaka, leading to the deployment of paramilitary forces in more than half of administrative districts.

At least six people were killed and hundreds injured in communal violence and mayhem that took place during the Durga Puja celebrations in Bangladesh last week. Several incidents of attacks on places of worship of minority communities by unidentified Muslim men were reported from across the country.

According to PTI, the violence had erupted after an alleged blasphemy incident at a Durga Puja pavilion in Cumilla, bordering Chandpur and about 100 km from Dhaka, leading to the deployment of paramilitary forces in more than half of administrative districts.

Bangladesh Prime Minister Sheikh Hasina promised to bring to justice the culprits behind the violence, saying anyone involved in the attacks on Hindu temples and Durga Puja venues will not be spared.

The alleged incident of blasphemy

Tensions in the country escalated on Wednesday after widely circulated footage on social media alleged an incident of blasphemy during the Durga Puja celebrations in the eastern district of Cumilla.

The Dhaka Tribune newspaper reported that at one stage, the situation went out of control and riots started spreading to a number of Durga Puja venues.

The local administration and the police came under attack as they tried to maintain law and order, it said.

On Thursday (October 14), an ISKCON temple was vandalised and a devotee was killed by a mob in an attempt to stir up communal tensions across the country.

As reported by The Indian Express, the attack on the ISKCON temple in Noakhali shocked the Hindu community there, leading to protests on the streets.

According to PTI, sporadic attacks and vandalism were also reported on Friday, with authorities issuing prohibitory orders in the Noakhali district, banning public gatherings from dawn to dusk. The Associated Press also reported that thousands of people clashed with police in Dhaka after the main Friday prayers.

On Saturday, nearly 10,000 demonstrators again gathered outside the main mosque in the captial. According to DW, many were seen with banners of Islamist political parties as the crowd chanted, “Down with the enemies of the Islam” and “Hang the culprits”.

Local Media reports on Sunday again reported Hindu temples and shops being vandalised in Feni, about 157 km from Dhaka. According to the Dhaka Tribune newspaper, the clashes broke out after an attack on demonstrators who were protesting against the attacks on Durga Puja venues in several places in Bangladesh.

The attacks also prompted the Bangladesh Hindu Buddhist Christian Unity Council to announce a sit-in and hunger strike from October 23 in protest.

Milan Kanti Dutta, president of the forum, said that they would launch a tougher movement if the government did not pay heed to their demand.

Several houses of Hindus in Bangladesh were also set on fire late on Sunday in a village in Rangpur district’s Pirgonj upazila, about 255 kms Dhaka, the bdnews24.com reported.

‘Will hunt them down’

Promising strict action, Bangladesh Prime Minister Shiek Hasina said that the incidents will be thoroughly investigated and “nobody will be spared”.

While speaking at an event of the Hindu community Dhaka, Hasina said, “The incidents in Comilla are being thoroughly investigated. Nobody will be spared. It doesn’t matter which religion they belong to. They will be hunted down and punished.”

She also said she hopes that India would take steps against any reaction at home, as it could have a fallout in Bangladesh.

The rise in the attack against minorities

As many as 3,679 attacks on the minority Hindu community took place between January 2013 and September this year in Bangladesh, the bdnews24.com reported quoting prominent rights group in Bangladesh Ain o Salish Kendra (ASK). The attacks included vandalism of and setting fire to 559 houses and 442 shops and businesses of the Hindu community, it said.

At least 1,678 cases of vandalism and arson attacks on Hindu temples, idols and places of worship were also reported in the same period, the group alleged. While 11 citizens from the Hindu community have died in these incidents, another 862 were injured, the report said.

Two women from the minority were community were also raped in 2014 and another four were sexually assaulted, it said, adding that at least 10 Hindu families were evicted from their homes and land in 2016, 2017 and 2020.

Meanwhile, following reports of vandalism at an ISKCON temple in Bangladesh and the killing of an ashram devotee, vice-president of ISKCON, Kolkata, Radharaman Das wrote to the United Nations, requesting the world body to send a delegation to the neighbouring country to look into the matter.

He also wrote a letter to Prime Minister Narendra Modi urging him to hold talks with his Bangladesh counterpart to end the ongoing ‘violence’ on Hindu minorities.