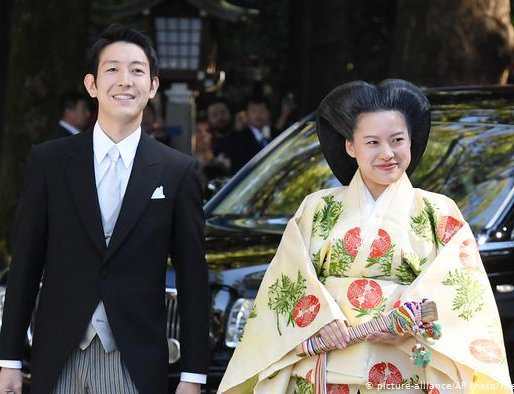 The eldest daughter of Japan's Crown Prince has officially left the Imperial household, becoming a commoner. Komuro Mako and her husband spoke publicly on Tuesday after getting married.

Komuro Mako said, "I have been helped, watched and supported by many people for the past thirty years. I would like to express my sincere gratitude to those who have worked with me."

Earlier this month, the Imperial Household Agency released a statement saying Mako had been diagnosed with PTSD. The agency said in 2017 that Mako and Komuro were getting engaged. But media reported his mother was in financial trouble with her former fiance.
The agency later announced no traditional ceremonies for Imperial family members' weddings will be held.

Mako said she was upset that false information about them was being spread. Mako said, "The erroneous information was accepted as if it was true for some reason. I was scared to see groundless stories spreading. I also felt pain and sadness. I am grateful to those who have continued to believe in Kei despite the difficult situation."

Komuro Kei said, "Despite various hardships, thanks to the support of Mako and people around us, I have been able to maintain my desire to live with her. I would like to express my sincere gratitude."

Reporters at the news conference were told they could only send questions in advance, and the couple would provide answers in writing.

Officials said that was the advice of a doctor because Mako was shocked by some of the questions.
The couple will not have the traditional wedding ceremony reserved for the Imperial family.

They plan to settle in New York where Komuro recently started working at a law firm.