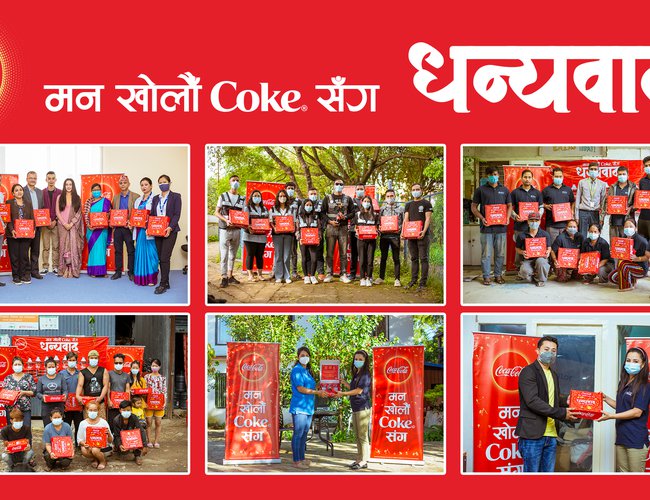 As a part of its ‘Dhanyabad’themed Dashain campaign, Coca-Cola has been conducting on-ground activations in various frontline fields such as the Healthcare sector and various NGOs who have played crucial roles in the fight against Covid-19 in Nepal.

Completing the halfway mark of the on-ground activation, Coca-Cola reached out to two major Covid-19 hospitals such as Patan Hospital and Bir Hospital and various NGOs such as RNA-16, Avni Venture, Doko Recyclers, Blue Waste 2 Value and Sano Paila. During the campaign, Coca-Cola has been engaging with frontline workers and sharing the “Dhanyabad” gift boxes which comes with personalized Coke bottles and a pair of Coca-Cola contour glasses. Coca-Cola’s brand ambassador SwastimaKhadka also joined the event at Bir Hospital on 25th October to express gratitude towards healthcare frontline workers.

Professor Dr. Bhupendra Kumar Basnet from Bir Hospital expressed,“during the 2ndCovid wave crisis, we used to serve around 350 Covidpatients each day. During which our nurses, cleaners, ward teams and doctors worked fearlessly and we overcame the crisis. Coca-Cola’s Dhanyabad campaign of sharing gratitude towards frontline workers of the pandemic has made us feel very honored. This has motivated and uplifted our spirits. For this, I would like to thank Coca-Cola.” (Awaiting final confirmation)

Speaking about the campaign, Mr.Pradip Pandey, Managing Director of Bottlers Nepal Limited shared,“The past one and a half year have been tough but have also made us resilient as we have been overcoming the challenges which would have not been possible if not for our frontline workers. The Dhanyabad on-ground activation is our sincere effort to share our heartfelt “Thank You” to them.

Coca-Cola had recently launched a Dashain Campaign with the theme of expressing gratitude to loved ones. Titled “Dhanyabad”, the campaign aims to inspire and encourage consumers to share gratitude with a refreshing bottle of Coke to those who have been there during the difficult moments during the pandemic.

MCC-Nepal Issued An Tender For The Construction Of a Transmission Line By Agencies 1 day, 5 hours ago