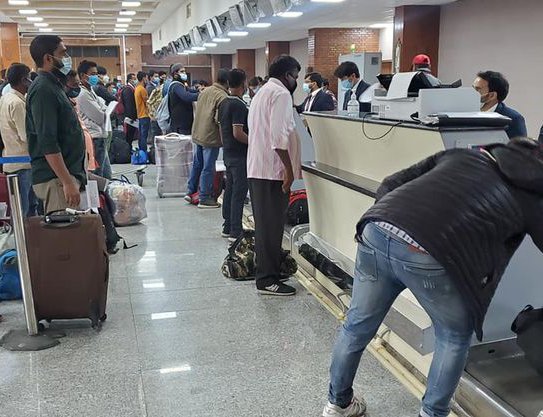 In the wake of a new variant of the novel coronavirus or SARS-CoV-2 reported lately in South Africa, the Ministry of Home Affairs has decided to bar the visitors from the African content till further notice.

Spokesperson of the ministry Fanindra Mani Pokharel has said that the Ministry has directed Department of Immigration to stop issuing on arrival visa for the visitors from Africa. As per the Ministry’s direction, the department has already issued notice to all 20/22 Airlines not to bring travelers from African continent to Nepal.

He also said that the discussion is on going in the CCMC as well regarding the new variant and step needed to take to avert another wave of COVID-19 in Nepal. Speaking with

Speaking to Nepal News Agency, he said that the drastic step is necessary for Nepal to avert the health crisis.

The World Health Organization (WHO) had designated this variant, B.1.1.529, as a “variant of concern (VOC)”, and given it the name Omicron.

The variant, which was announced by scientists in South Africa on Thursday, was detected in two more countries, Israel and Belgium. Botswana and Hong Kong are the other countries where the variant has been found.

The WHO said about 100 genome sequences of the variant have been reported so far. Many of the infected people were fully vaccinated, with at least one person in Israel having also received a third, booster, and dose of vaccine.

Nepal To Administer Booster Dose From Today By Agencies 1 day, 4 hours ago