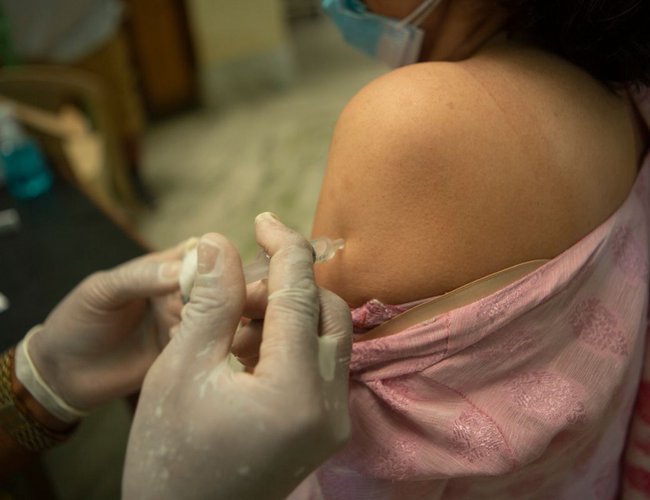 Previously, a South African research institute claimed that that the Pfizer vaccine only partially protected against the Omicron Coronavirus variant.

Preliminary laboratory studies demonstrate that three doses of the Pfizer-BioNTech COVID-19 vaccine neutralize the Omicron variant, while two doses appear to be significantly less effective, Pfizer said in a statement on Wednesday.

The company’s scientists compared the results from blood taken from individuals who had received the booster a month earlier with those from blood of vaccinees with only two shots.

According to the statement, two doses likely still offer some protection against severe disease.

“Our preliminary, first dataset indicates that a third dose could still offer a sufficient level of protection from disease of any severity caused by the Omicron variant,” said BioNTech CEO Ugur Sahin.

“Although two doses of the vaccine may still offer protection against severe disease caused by the Omicron strain, it’s clear from these preliminary data that protection is improved with a third dose of our vaccine,” said Pfizer CEO Albert Bourla. “Ensuring as many people as possible are fully vaccinated with the first two dose series and a booster remains the best course of action to prevent the spread of COVID-19.”

However, two independent researchers said that Pfizer’s statements about the vaccine’s effectiveness must be taken with caution.

“It must be said honestly that currently Pfizer statements are based on in vitro experiments and, in order to evaluate the effectiveness of the Omicron vaccine, we will have to wait patiently to gather information from the real world,” said Dr. Oren Kobiler of Tel Aviv University. “Right now everything is speculation based on lab data.

“Until we have real data from people who got the disease, we will not know what the significance of the Omicron is on any population.”

A similar sentiment was expressed by Prof. Eyal Leshem, director of the Center for Travel Medicine and Tropical Diseases at Sheba Medical Center.

“Vaccine efficacy can only be inferred from clinical and epidemiological data,” he said. “The ability of antibodies to neutralize the virus in a lab can give us a direction, but does not tell us what will happen in real life in terms of infection or severe disease, which is the most important parameter.”

Some 4.1 million eligible Israelis have received the third shot of the vaccine so far, and around a million have not, leaving these individuals more vulnerable to infection – if the Pfizer data are correct.

Kobiler said that in addition, there is concern that an updated and adapted vaccine to target the Omicron variant, which Pfizer said it could have ready by March, might be less effective against the Delta variant. The latter is still the most dominant strain in most of the world and “therefore it is unclear whether it is right to rush into further developments at this stage,” Kobiler said.

“It is interesting to see that it is going to take some time for an updated version of the vaccine, especially if we include also all the regulatory aspects,” Leshem noted. “By that time, we might not need such an update.

Kobiler stressed that antibodies represent only one part of the immune system, and therefore laboratory tests do not fully mirror the ability of the body to fight off a disease, and “we cannot conclude anything by looking at only the antibodies.”

He mirrored Pfizer’s sentiments and said that it is likely that if Omicron is four or five times more infectious than Delta, as initial reports have shown, people with lower levels of antibodies could get infected but will not develop severe disease.

Pfizer said that they will continue to collect both data from laboratory tests and from the field to obtain more information.

Data published late Tuesday by the Africa Health Research Institute in South Africa said that the Omicron variant could partially evade antibody immunity in people who had two shots, but that people who had two doses and recovered were still largely protected.

“Laboratory research from South Africa strongly suggests that the SARS-CoV-2 Omicron variant escapes antibody immunity induced by the Pfizer-BioNTech vaccine, but that considerable immunity is retained in people who were both vaccinated and previously infected,” the report read, adding that nonetheless, “most vaccinologists agree that the current vaccines will still protect against severe disease and death in the face of Omicron infection.”

The South African research was not peer-reviewed but submitted to the health research sharing website MedRxiv.

Alex Sigal, a professor at the research institute, said on Twitter there was “a very large drop” in the neutralization of the Omicron variant relative to an earlier strain of COVID-19.

However, the fact that the study showed that blood from people who had received two doses of the vaccine and had a prior infection were mostly able to neutralize the variant suggests that a vaccine booster could help to fend off infection.

According to Leshem, the fact that Pfizer data show an increased ability of the antibodies to neutralize the variant represents a significant development.