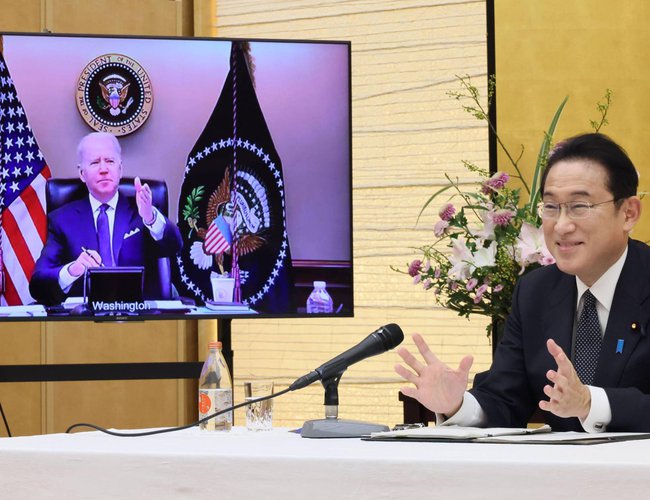 Japanese Prime Minister Kishida Fumio has held an online summit with US President Joe Biden. Kishida says they discussed a range of global challenges including security and the economy.

On Friday, Kishida said, "President Biden and I agreed to work together and seek further cooperation with allies to realize a free and open Indo-Pacific region. I proposed hosting a meeting of leaders from Japan, the United States, Australia and India in the first half of this year. The president agreed."

The two leaders spoke for about 80 minutes. Kishida says they agreed their countries will closely cooperate to tackle geopolitical issues. They include China's increasing assertiveness in the East and South China Seas, and its activities in Hong Kong and the Xinjiang Uygur Autonomous Region.

Kishida and Biden also discussed North Korea, which has recently launched a flurry of missile tests. The Japanese leader says Biden expressed strong support for the immediate resolution of the North's abductions of Japanese nationals.

Kishida says he told Biden that he is ready to establish a new national security strategy and dramatically strengthen Japan's defense capabilities.

He says Biden referred to his country's unwavering commitment to protecting Japan, including Article Five of the Japan-US Security Treaty, which applies to the Senkaku Islands in Okinawa Prefecture.

Japan controls the islands. The Japanese government maintains the islands are an inherent part of Japan's territory. China and Taiwan claim them.

The two leaders also agreed to set up a framework for regular bilateral meetings involving senior officials from the foreign affairs and economic spheres.

Japan To Lower COVID-19 Classification On May 8 By Agencies 3 hours, 30 minutes ago