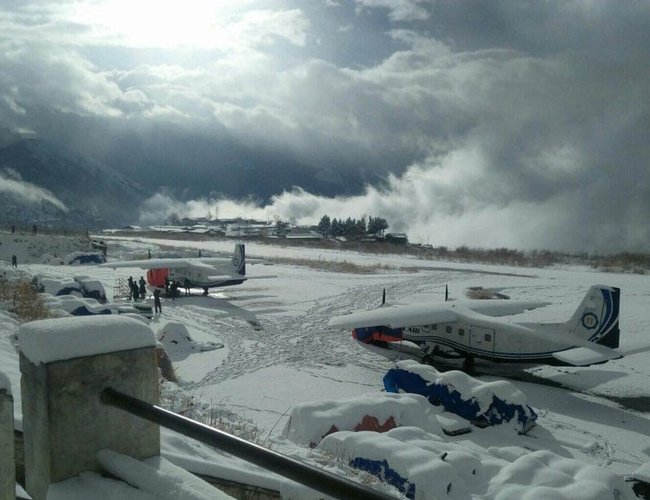 Normal life in many parts of hilly areas of Sudurpaschim province Humla and Juymla districts of of Karnali province and Tribhuwan Rajpath has been affected due to snowfall that occurred from Thursday morning.

Regular flights have also been disrupted owing to the snowfall. As the flights could not take place, the supply of foodstuff carried out from Nepalgunj and Surkhet is also affected.

Likewise, service delivery from the government and non-governmental organisations is also impacted after the snowfall.

Area Police Office at Budar confirmed that the snowfall taking place since last night has disrupted vehicular movement here and efforts are ongoing to clear the snow.

According to National daily, dozens of vehicles and a large number of passengers travelling in the vehicles are stranded at Gaira and Budar areas in Doti. Sahukharka, Gaira, Hagulte and the vicinity are blanketed with snow in the district.

Likewise, Pahalmansingh Swar Highway from Silgadhi of Doti to Sanfe of Achham district is also obstructed due to snowfall. Vehicles heading to Bajura and Achham districts from Tarai and to Tarai from hilly districts are stranded at different points after a heavy snowfall in Chaukhutte area.

The snowfall has badly affected people's lives here as they have faced difficulties to move outside home.

Heavy snowfall taking place at Simbhanjyang and Aghor areas of Tribhuvan Highway since last night has obstructed vehicular movement from 2:00 am this morning, the Area Police Office in Palung said.

Mayor of Thaha Municipality Labsher Bista said it was difficult to clear the snow as the areas witnessed heavy snowfall coupled with rain. The vehicles heading to Kathmandu from Hetauda are stranded at Aghor area of Tribhuvan Highway.