Voting At 58 Seats Kicks Off In Utter Pradesh

Voting At 58 Seats Kicks Off In Utter Pradesh 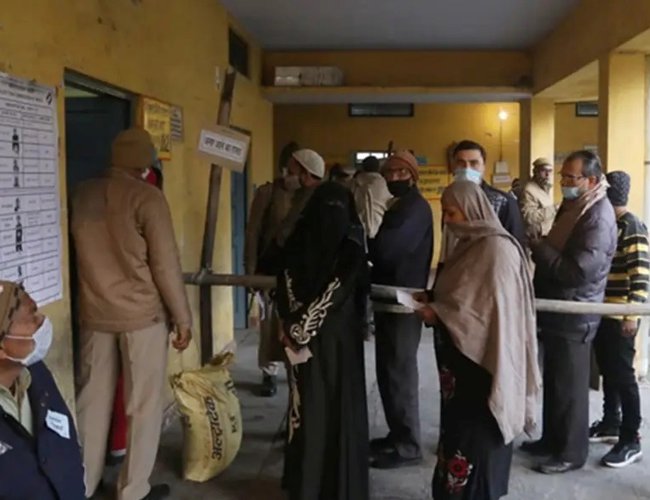 Polling for the first phase of assembly elections in the state of Uttar Pradesh kicked off Thursday. As many as 623 candidates are in the fray and around 2.27 crore people are eligible to vote in this phase.

The polling is in progress at a total of 58 constituencies spread across 11 districts in the western belt of the state. A bulk of these seats are Jat dominated who had participated actively in the stir against the Centre’s three contentious agriculture laws in the national capital last year. The fiercely contested first round, where the ruling BJP is expected to face a stiff challenge from the resurgent alliance of Samajwadi Party (SP) and Rashtriya Lok Dal (RLD), will test the impact of the farmers stir.

Significantly, the first phase polling will decide the fate of nine ministers in the Yogi Adityanath-led government. The ministers whose electoral fate will be decided are Suresh Rana, Atul Garg, Shrikant Sharma, Sandeep Singh, Anil Sharma, Kapil Dev Agarwal, Dinesh Khatik, Dr G S Dharmesh and Chaudhary Laxmi Narain. The voting for 403-member Uttar Pradesh Assembly will be held in seven phases, with the last round on March 7. Counting of votes will be held on March 10.

The districts where the elections are being held are Shamli, Hapur, Gautam Buddh Nagar, Muzaffarnagar, Meerut, Baghpat, Ghaziabad, Bulandshahr, Aligarh, Mathura and Agra. In the 2017 polls, the BJP had bagged 53 of these 58 seats while the SP and the Bahujan Samaj party got two seats each. One seat went to the RLD.