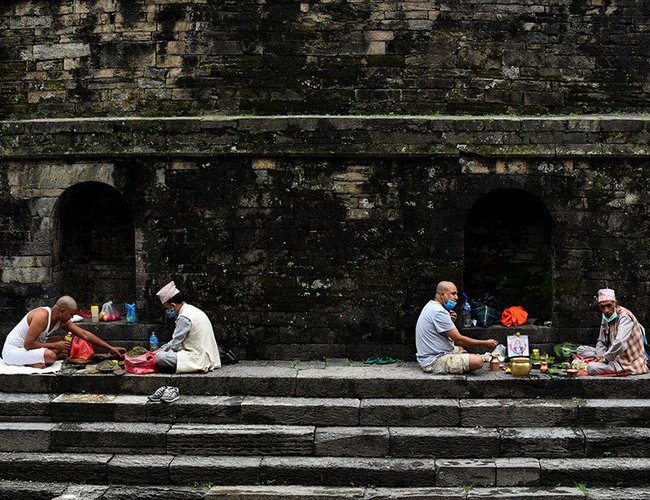 The 15-day Pitri Paksha or Sorha Shradha will start from tomorrow (September 11). Hindus from Nepal and India perform shradha in these 15 days as the homage fortnight to ancestors, Pitri. Pitru Paksha is dedicated to the departed souls. This period is meant for pleasing them, asking for forgiveness, and ridding oneself of the Pitru Dosha (curse of ancestors).

Pitru Paksha or Shraadh is the 15-day period preceding Navratri when Hindus offer prayers or tarpan to their ancestors through food offerings. Shraadhs are observed from the autumnal full moon to the following Amavasya for 15 days. On this day, til, rice among other food items are offered to ancestors during sunrise, followed by puja, havan and daan. During this time, no festivities are allowed and no new things are bought. The period is also called Pitri Paksha/Pitr-Paksha, Pitri Pokkho, Sorah Shraddha, Jitiya, Kanagat, Mahalaya, Apara Paksha and akhadpak, Pitru Pandharavda or pitru paksh.

The 16-day Pitri Paksha has started from today. These 16 days is the homage fortnight to ancestors, Pitri. Pitru Paksha is dedicated to the departed souls. This period is meant for pleasing them, asking for forgiveness, and ridding oneself of the Pitru Dosha (curse of ancestors).

In the Hindu calendar, there is a fortnight dedicated to the deceased ancestors. Therefore, during this period, rituals like Shraddh, Tarpan and Pind Daan are performed to please the departed souls that return to the earth to meet their loved ones.

For the unversed, this period is deemed inauspicious for carrying out functions like engagement (roka) or marriage (vivah) ceremonies, grihapravesh (house warming ceremony), mundane (head tonsuring ceremony of a child) etc. This Paksha (phase) is primarily meant for paying tributes to dead relatives, pleasing them, asking for forgiveness and freeing oneself of the Pitru Dosha (or the curse of the ancestors).

The fortnight that starts after the Full Moon day (Purnima Tithi) in the month of Bhadrapada is referred to as Pitru Paksha. This period is devoted to the deceased family members/ancestors, and hence it is equivalent to mourning or remembrance. Therefore, people, primarily men, perform Shraddh and Tarpanam rituals to please the departed souls. And since Pitru Paksha is meant for worshipping and pleasing the deceased, it is also the time for abstinence.

Belief suggests that the unhappy souls of the deceased return to the Earth to see their family members. Therefore, to ensure they attain Moksha (get liberated), people quench their thirst and satisfy their hunger by performing the Pind Daan (offering food consisting of cooked rice and black sesame seeds. People also offer food to the crows (because they represent the dead). By accepting the food provided by people, the crow intimates that the ancestors are pleased. However, if it refuses to have the food offered, it indicates that the dead are displeased.

Besides these, men also abstain from shaving their beard/cutting their hair because it is believed to be the time for mourning and penance. And this is why no auspicious events or functions are carried out until the Pitru Paksha ends. So, for example, people do not purchase new clothes or accessories, gold or any other precious metal or make investments in a new house or vehicle.

Furthermore, consumption of onion, garlic, meat, or other heat-generating ingredients with a strong aroma is avoided. And last but not least, people maintain celibacy during this period.

Thus, by offering prayers and performing rituals, people help aggrieved souls get discharged from the cycle of birth, life and death. And this act of reverence also helps people relieve themselves of the Pitru Dosha (the curse of the ancestors).

The fifteen days of Malaya Paksha consist of 15 Tithi (also called Tithi). They are Pratipat, Dvitiya, Tritiya, Chaturthi, Panchami, Shashti, Saptami, Ashtami, Navami, Dasami, Ekadasi, Dvadasi, Trayodasi, Chaturdashi, Amavasya (new moon). According to Hindu mythology, every individual who wants to perform this Pitri Tarpan, they should do it on the same day of their ancestor's died which will fall within any one of these fifteen days.

The performance of Shraddha by a son during Pitri Paksha is regarded as compulsory by Hindus, to ensure that the soul of the ancestor goes to heaven. In this context, the scripture Garuda Purana says, "there is no salvation for a man without a son". The scriptures preach that a householder should propitiate ancestors (Pitris), along with the gods (devas), ghosts (bhutas), and guests. The scripture Markandeya Purana says that if the ancestors are content with the shraddhas, they will bestow health, wealth, knowledge and longevity, and ultimately heaven and salvation (moksha) upon the performer.

The performance of Sarvapitri Amavasya rites can also compensate for a forgotten or neglected annual shraddha ceremony, which should ideally coincide with the death anniversary of the deceased. According to Sharma, the ceremony is central to the concept of lineages. Shraddha involves oblations to three preceding generations—by reciting their names—as well as to the mythical lineage ancestor (gotra). A person thus gets to know the names of six generations (three preceding generations, his own and two succeeding generations—his sons and grandsons) in his life, reaffirming lineage ties. The shraddha is performed on the specific lunar day during the Pitri Paksha, when the ancestor—usually a parent or paternal grandparent—died. There are exceptions to the lunar day rule; special days are allotted for people who died in a particular manner or had a certain status in life. Chautha Bharani and Bharani Panchami, the fourth and fifth lunar days respectively, are allocated for people deceased in the past year. Avidhava Navami ("Unwidowed ninth"), the ninth lunar day, is for married women who died before their husbands. Widowers invite Brahmin women as guests for their wives ' shraddha. The twelfth lunar day is for children and ascetics who had renounced worldly pleasures. The fourteenth day is known as Ghata Chaturdashi or Ghayala Chaturdashi and is reserved for those people killed by arms, in war, or who suffered a violent death.

Sarvapitri Amavasya ("all fathers' new moon day") is intended for all ancestors, irrespective of the lunar day they died. It is the most important day of the Pitri Paksha. Those who have forgotten to perform shraddha can do so on this day. A shraddha ritual performed on this day is considered as fruitful as one conducted in the holy city of Gaya, which is seen as a special place to perform the rite, and hosts a fair during the Pitri Paksha period. Mahalaya is the day when the goddess Durga is believed to have descended to Earth. Bengali people traditionally wake up early in the morning on Mahalaya to recite hymns from the Devi Mahatmyam (Chandi) scripture. Offerings to the ancestors are made in homes and at puja mandaps (temporary shrines).Matamata ("Mother's father") or Dauhitra ("Daughter's son") also marks the first day of the month of Ashvin and the beginning of the bright fortnight. It is assigned for the grandson of the deceased maternal grandfather.

The ritual is also held on the death anniversary of the ancestor. The shraddha is performed only at noon, usually on the bank of a river or lake or at one's own house. Families may also make a pilgrimage to places like Varanasi and Gaya to perform Shraddha.

Fulpati 2022: Important And Significance By NEW SPOTLIGHT ONLINE 34 minutes ago