NEA To Improve Infrastructures In Nepalgunj

NEA To Improve Infrastructures In Nepalgunj 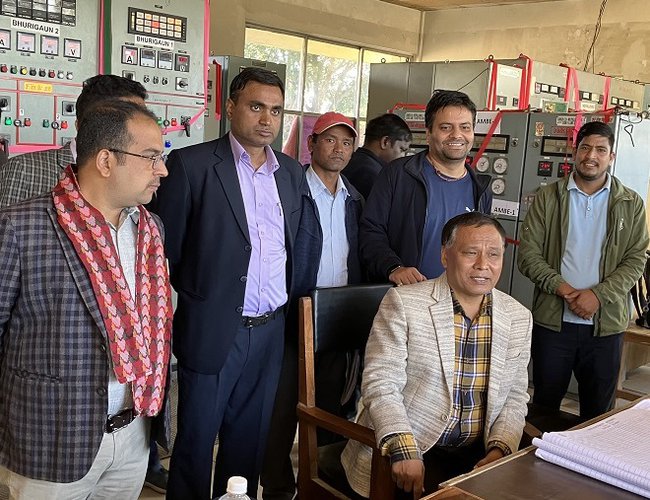 The Nepal Electricity Authority is going to build a network of transmission and distribution infrastructures for sufficient, reliable and quality supply of power in Nepalgunj and Kohalpur areas of Banke district.

The Authority will build the infrastructure, including the high-level transmission and distribution lines in a phase-wise manner to meet the potential demand of electricity in Nepalgunj, Kohalpur and their surrounding areas till 2050, according to the NEA.

Based on the ongoing urbanisation and industrialisation pace in the Nepalgunj and Kohalpur areas, electricity consumption here is projected to reach 800 megawatts by 2050.

The NEA has planned to expand and strengthen the network of transmission and distribution systems in the Nepalgunj area to increase the domestic consumption of electricity and to supply sufficient, reliable and quality electricity.

To solve the immediate problem of power supply, the transmission and distribution system structures currently in operation will be upgraded and expanded.

The NEA said that 400, 220 and 132 kV high capacity transmission lines and substations would be constructed to address the long-term demand and the increased consumption of electricity.

A high-level team of the Authority led by its Managing Director Kul Man Ghising visited Nepalgunj on Saturday and Sunday and received information about the work that needed to be done immediately for the upgrading of the existing transmission and distribution lines and substations.

The team conducted on-site monitoring of the construction sites where the new lines and substations would be built .

The Authority said it would prepare a plan to be done immediately and in the long-term on the basis of potential power demand and proceed ahead with the construction of the required transmission and distribution lines and substations.

Ghising said that 11 and 33 kV lines and substations will be strengthened and expanded to solve the immediate problems facing by the consumers.

He clarified that necessary work is being done for the improvement of 33 and 11 kV lines.

As the current transmission and distribution systems do not bear the demand of electricity in summer, the consumers in Nepalgunj area have been facing problems such as low voltage, tripping and voltage down.

The Authority is going to construct a new substation of 132 kV in Kohalpur.

The land required for the construction of the substation has been acquired. Currently, the proposals of the bidders are being evaluated for the selection of the builders.

'We are studying the feasibility of expanding the South Corridor 400-220 kV transmission line from Lamahi in Dang to nearby the Rapti River to Banke, from Mainapokhri in Bardiya to Tikapur in Kailali to address the demand of electricity in the Nepalgunj region in the future, and we are also going to build a high capacity line from Kohalpur to Nanpara in India for more electricity trade with India,” he said.