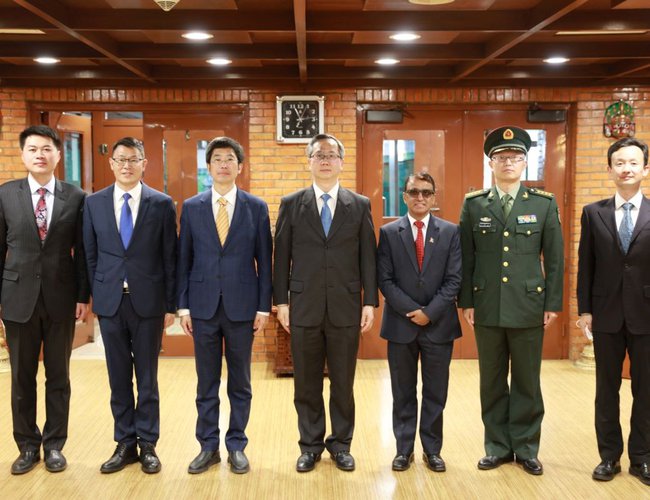 Newly appointed Chinese Ambassador to Nepal Chen Song has said that he would work to write a new chapter in Nepal-China relations.

Speaking to journalists upon his arrival in Kathmandu today to assume his post, the Chinese Ambassador said, “As the new ambassador to Nepal, I am deeply aware of the glorious mission and great responsibility.”

I stand ready to work closely with Nepali friends from all walks of life, gather wisdom and pool strength to bring more benefits to the two peoples, and jointly write a new chapter of the China-Nepal Strategic Partnership of Cooperation Featuring Ever-lasting Friendship for Development and Prosperity, said the ambassador, according to a statement issued by the Chinese Embassy today.

The Chinese ambassador was welcomed by the Chinese embassy officials and the officials from the Foreign Affairs ministry of Nepal at the Tribhuvan International Airport upon his arrival.

Full text of the statement made by the newly appointed ambassador:

It is my great pleasure to come to Nepal, a flower-filled beautiful country, as the 22nd Ambassador Extraordinary and Plenipotentiary of the People's Republic of China to Nepal. I would like to express my heartfelt respect and sincere thanks to friends from all walks of life who have cared about and supported the development of China-Nepal relations for a long time.

Linked by mountains and rivers, China and Nepal enjoy ever-lasting friendship. More than 1,600 years ago, Chinese eminent monk Faxian and Nepali eminent monk Buddhabhadra exchanged visits and cooperated in translating Buddhist classics echoed through ages. In Tang Dynasty, the eminent monk Xuanzang visited Lumbini, the birthplace of the Buddha Sakyamuni, and left precious written records. In Yuan Dynasty, the famous Nepali craftsman Arniko came to China, and built Miaoying Temple in Beijing. Since the establishment of diplomatic relations in 1955, China and Nepal have always been respecting, trusting and supporting each other. In the critical moments of responding to the 2015 Nepal earthquake and fighting against the COVID-19 pandemic, the two countries have lent mutual support to each other, setting an example of equal treatment, friendly cooperation, and mutual benefit between neighboring countries.

In 2019, President Xi Jinping paid a historic state visit to Nepal. The two heads of state agreed to build the Strategic Partnership of Cooperation Featuring Ever-lasting Friendship for Development and Prosperity. In recent years, under the framework of the Belt and Road Initiative and the Global Development Initiative, China-Nepal practical cooperation in various fields has been improved both in quality and efficiency, and the trans-Himalayan Multi-Dimensional Connectivity Network has gradually taken shape.

In October 2022, the 20th National Congress of the Communist Party of China was successfully held in Beijing. The most important result of the meeting was the election of a new central leadership of the CPC Central Committee with General Secretary Xi Jinping at its core. China embarked on a new journey to build China into a modern socialist country in all respects and advance the rejuvenation of the Chinese nation on all fronts through a Chinese path to modernization. Not long ago, Nepal successfully held federal and provincial elections, and formed new government. Changes of the world, of our times and of history are unfolding today in ways like never before. In the face of new situations, new opportunities and new challenges, China will, as always, firmly support Nepal in safeguarding state sovereignty and national dignity, exploring a development path suited its national conditions, and pursuing independent domestic and foreign policies. China is willing to work with Nepal to stay true to our original aspirations, inherit friendship, join forces to seek common development, and build a closer China-Nepal community with a shared future in the new era.

As the new ambassador to Nepal, I am deeply aware of the glorious mission and great responsibility. I will follow the important consensus reached by President Xi Jinping and Nepali leaders, stay devoted and dedicated to outline their freehand brushwork of bilateral relations into a meticulous painting. There is a Nepali saying “even a drop of water can fill a tank”. Chinese also say “the fire burns high when everybody adds wood". I stand ready to work closely with Nepali friends from all walks of life, gather wisdom and pool strength to bring more benefits to the two peoples, and jointly write a new chapter of the China-Nepal Strategic Partnership of Cooperation Featuring Ever-lasting Friendship for Development and Prosperity.