For Our Environmental Future

This year, the World Environment Day (WED) will be celebrated on the theme of 'Connecting People to Nature' to further realize the importance of and appreciate the beauty of Nature, and work together to protect the Earth that we all share. 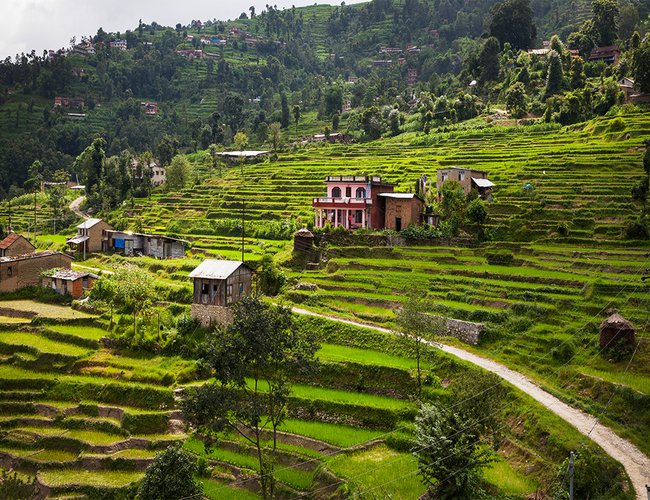 While studying plant ecology in the early 1980s, Gurus repeatedly emphasized that 'the Earth does not belong to man. Man belongs to the earth… All things are connected like the blood which unites one family... Whatever man does to the web, he does to himself. A nation that destroys its soils, destroys itself. Forests are the lungs of our land, purifying the air and giving fresh strength to our people." These statements contributed to the need to realize the urgency of conserving the Nature – the plant, animal, water, air and the soil.

This year, the World Environment Day (WED) will be celebrated on the theme of 'Connecting People to Nature' to further realize the importance of and appreciate the beauty of Nature, and work together to protect the Earth that we all share. The WED is celebrated on June 5, the day the Stockholm Conference on Human Environment was started in 1972 and the day designated by the UN General Assembly on 15 December 1972 to observe as WED. The WED was celebrated for the first time on 5 June 1974 with the theme 'only one Earth' and WED celebrations have been held annually since 1974 to reaffirm, inter alia, concerns for the preservation and enhancement of the environment.

Nepal started celebrating WED, initially with contribution and coordination from the Man and Biosphere Programme, a UNESCO initiative, by organising exhibition, interaction, talk and awareness raising programmes. The then Prime Minister Nagendra Prasad Rijal planted a sapling to observe the WED in the mid-1980s. Later on the Environmental Impact Study Project, established in 1982 under the Ministry of Forests and Soil Conservation (MoFSC) was engaged in organizing this event. The National Planning Commission Secretariat (NPCS), being the Secretariat of the Environment Protection Council, organized a comparatively mega-event in 1993, after Rio Earth Summit in 1992, to celebrate WED under the theme 'poverty and the environment'. Initially coordinated by MoFSC and then by NPCS, the Ministry of Population and Environment (MoPE) was involved in organizing and coordinating WED activities since its establishment in September 1995. Recalling the past, WED main programme is honoured with the gracious presence of Prime Minister of Nepal from over two decades.

Nepal's experience in observing the WED has yet to contribute to improve the environmental quality, rather several commitments were made in conserving the environment and the Nature. Although the 1972 National Report prepared for the UN Conference on Human Environment recognized pollution problem in Kathmandu Valley and made commitments to improve air quality, Kathmandu is now labelled as 'dustmandu' or 'maskmandu' or a polluted city. Interestingly, 'pollution control' was one of the commitments of the candidates of the May 2017 local election in Kathmandu. This could be considered a 'reasonable realization' but it requires 'translation of commitments' into actions in a city where 'all are superb', and all want to grab 'power and resources' but a culture of 'shifting responsibility' has matured over the years. Furthermore, nobody cares for 'cost of delay decision and no action'.

Importance of nature conservation has been highlighted in Nepal since the 1970s. During the last 4 decades, several policies, strategies, plans, programmes, and decisions have been made to advance nature conservation and protect the environment in Nepal. Nearly one-fourth of the total area of the country is maintained as protected area. However, increasing pressure from infrastructure projects, including in national parks, has challenged the 'very existence of biodiversity-rich protected areas'. Tools and processes, internationally used to make the development environment-friendly and sustainable, do not work in Nepal's landscape because technical requirements are yet to be 'determined' by competent personalities. There is a tendency even among professionals of sometimes waiting for non-technical political guidance. Alternatively, professionals have yet to contribute to 'informed decision-making'. One could take the example of environmental assessment (EA) system. This tool is widely used in all countries through 'prescriptive' and/or 'discretionary' approaches. Nepal followed the 'prescriptive' approach through environmental laws. Investors or project proponents are challenging its use without proper understanding on usefulness of this tool. 'Cut-and-paste syndrome' prevails in Nepal's EA reports and effective implementation of approved EA report might not contribute to make that development sustainable and environment-friendly. This ground reality has not contributed to conserve nature and natural resources for present and future generations.

Rapid environmental degradation associated with country's geological fragility and unregulated use of natural resources has increased human-induced disasters thereby claiming the lives and property each year. Human existence is also challenged by disasters. People are habituated in informing the consequences of environmental degradation. Leaders and decision-makers speak much on nature conservation and postpone actions. This 'syndrome' is likely to continue.

The WED is an opportunity to recommit publicly for action for the whole year. In general, countries declare on 5 June the key environmental undertakings and review progress and short-comings next year to declare new and additional initiatives to address the on-going and emerging environmental threats. In Nepal, awareness raising programmes are organized. Many organizations and individuals are being recognized each year for their 'excellent work' on environment conservation. Environmental award is offered mostly based on 'applicant's request for award' and selection by a committee. This ritual has continued over the years and the situation has changed. Recalling 1984, the District Administration Office regulated distribution of pamphlets and 'maun julus' in Ratnapark area on June 5. At that time, batabaran was understood or interpreted as 'political environment'.

This year's theme focuses on linkages between people and Nature and WED slogan is 'I am With Nature'. It signifies the urgency of engaging people for nature conservation. Excluding pollution and wastes, Nepal's environmental problems are mostly rural in nature and related to loss of fertile soil, landslides, deforestation and forest degradation, and drying-up of drinking water sources. They sufficiently require nature-based solutions. Let us hope that this year WED urges Nepali people to redouble community efforts in conserving the nature, promoting effective implementation of nature-based solutions, and sustainably utilizing its resources to improve the living standard of the poor and environmentally vulnerable people and resources. We should base our action on what we have and what we need. I saw somewhere on Twitter: 'nothing will work unless you do'. Let us ACT now and continue to ACT to shape our environmental future.