The Urgency Of Electric Vehicle Policy And Infrastructures In Nepal

The Urgency Of Electric Vehicle Policy And Infrastructures In Nepal 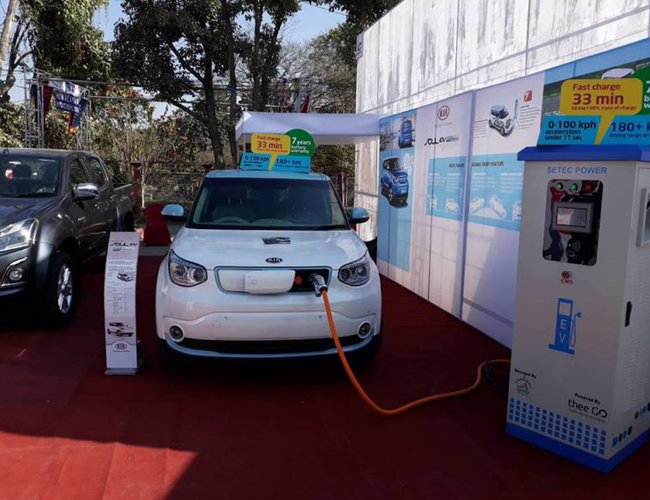 India, China and other countries and prominent vehicle manufacturers have announced their plan to end the sales of (petrol) and diesel cars in the foreseeable future. This will have a tremendous impact in Nepalese transportation sector as well as in the overall economy and Gross Domestic Products. To benefit from the global trend and regional dynamics in transportation, Nepal needs an urgent electric vehicle policy and infrastructure to cope with the rapid development of electric vehicles in response to greenhouse gas emissions reduction to address global issues including climate change.  Some of the policy options could be reducing the import tax to import electric vehicles, green vehicle procurement for government fleets, initial investment support to install charging infrastructure among others. A legislation supporting electric vehicle promotion would be a good first action to begin with.

Current global warming phenomenon is having profound impacts in the livelihood of people not only in the developing countries but also in the industrialized world.  Industrialized countries contribute to the major share of greenhouse gases (GHGs) emissions globally, which are the major precursors of global warming that causes climate change. Major impacts have been seen in agriculture, water resources, natural resources among others in the form of drought, wildfires, hurricanes, ice and snow storms along with other issues.

Nepal's contribution to the GHG emissions is smaller compared to the other nations that produce power using fossil fuels. Nepal electricity comes from hydropower resources and only limited fossil fuel is used in some industrial processes, manufacturing (furnace oil) and in emergency generators (diesel fuel). Aviation fuel and cooking gas are the other major sources of GHG emissions in Nepal. While kerosene heaters are used in urban areas during colder months, heating in semi-urban and rural areas is done by using fuel woods and other agricultural residues, which mostly produces carbon neutral carbon emissions.

Transportation fuels are the largest sources of emissions along with manufacturing, cooking (LPG), agricultural and land use change in Nepal. Reducing the consumption of fossil fuel from the transportation sector will not only reduce the GHG emissions but also reduces import and external dependency in a significant way.

It is important to note that Nepal has also signed the Paris Climate Accord to strengthen the global action to the threat of climate change in keeping the temperature rise from global warming under 2 degrees Celsius above pre-industrial levels. Nepal has submitted its Nationally Determined Contributions(NDCs) to the United Nations Framework Convention on Climate Change to meet its obligations. According to IFC (2017), Nepal has stated in its NDCs that it will generate over 12,000 MW of hydroelectricity and 2100 MW from solar by 2030 among others.

Since Nepal has no proven sources of fossil fuels, the dependency of these fuels with India (or China for that matter) may continue perpetually. A sustainable alternative is required to reduce the GHG emissions from the transportation sector of Nepal.  One of such alternatives could be to develop a policy to promote the use of electric vehicles at least for 50 % of the fleet vehicles by 2030.  The biggest barrier to achieve this goal is the lack of electricity from hydro resources. Based on the currently planned hydro projects, it is expected that the supply of electricity for residential, commercial and industrial sectors exceeds the demand and there will be sufficient power to fuel thousands of charging stations by 2030.

Nepal will be facing the biggest challenge ever due to the revolution taking place in global scale in terms of EVs.  The most recent situation is noteworthy as India recently announced that it will not produce any gasoline and diesel cars by 2030. India is the supplier of over 80 % of vehicles in Nepal and the implication it will have on Nepal will be devastating unless Nepal develops timely strategies to tackle such situations. As a matter of fact, India’s announcement will be a tremendous opportunity for Nepal to transition to EVs powered from hydroelectricity and thereby reduce fuel import. There are some significant global milestones happening related to EV policies and transitions.

• China, which is the largest car market globally (takes 30% of car market) and one of the largest manufacturer of the vehicles recently announced its intention to phase out the production and sale of gas and diesel vehicles altogether. It is expected to happen between 2030 and 2040.

• In June 2017, Norway agreed to end sales of gas and diesel cars by 2025. (Norway leads the world in EVs — almost 40 percent of its newly registered vehicles were hybrid, electric, or hydrogen in 2017.)

• France has announced that it would end sales of gas and diesel cars by 2040.

• Britain has announced that it would end sales of gas and diesel cars by 2040.

• The Dutch parliament in 2017 voted through a motion to end all gas and diesel car sales by 2025.

• The Scottish government has also announced that it would phase out gas and diesel cars by 2032.

• German car manufacturer Volkswagen has a target to produce of 2 million to 3 million electric cars by the year 2025.  Similarly, Mercedes-Benz, Volvo, BMW, Jaguar Land Rover have a hard target to bring EVs in the market.  TESLA is a global company that is established to produce EVs only in the market.

EVs currently own only 0.25 % share of the global light-duty passenger vehicle market. However, this sector is growing tremendously, with the TESLA revolution as well as due to the drive of reducing emissions from the transportation sector.  The International Energy Agency (EIA, 2016) reported that there are over 2 million EVs in the road globally. Norway alone has achieved almost 30% of the market share by EVs.  Many industrialized countries have set a hard target to have 30 % of the market share by EVs.

Many vehicle manufacturers have started to produce EVs along with their conventional Internal Combustion Engines (ICEs).  Some of the manufacturers have set a target to produce only EVs in foreseeable future. Currently, the cost and the charging infrastructure for EVs have been the major barriers.  The performance, efficiency, and range of the EVs are increasing because of the technological advances and decreasing costs, the electric vehicle is seen as an attractive cheaper and cleaner alternative to the conventional vehicles. EVs include passenger automobiles, buses, low-speed vehicles such as bicycles and golf carts and commercial semi-trucks.

No fossil fuel is consumed in EVs as there is no ICE.  EVs fully eliminate combustion, tailpipe emissions, oil and transmission fluids reducing brake wear and maintenance through regenerative braking. Depending on the intensity of electricity grid, EVs are mostly the greener alternatives of all vehicles. Electricity generated from solar or wind systems can be used to power the charging stations to make EVs greener.

GG: Growing Local Reach By A Correspondent 3 months, 2 weeks ago

WVIN Working For Change By A Correspondent 1 year, 1 month ago

A Search For Genderless Talent By Susmita Aryal 1 year, 2 months ago

Women In Leadership By Aagya Pokharel 1 year, 2 months ago