Both district headquarters are now congested, though their locations are different. One is on the river bank and another on the lap of a hill, a resting place, that is, Chautara. Both headquarters look beautiful with higher mountains close by 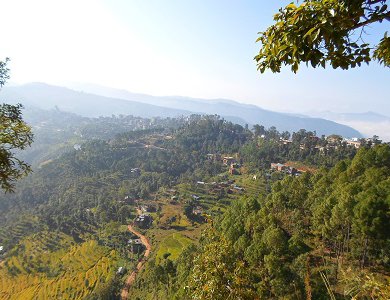 Chainpur is the headquarter of Bajhang district in Far West Nepal. Chautara is the district headquarter of Sindhupalchok in Central Development Region. Both are Himalayan districts, bordering with China to the North. Both are remote. Sindhupalchok became the gateway to China through the Araniko Highway, after Nepal got the access to China through the land route in the 1970’s. Bajhang is still waiting for the authorities to open the northern border access to Kailash, Manasarobar, through Urailekh Pass. Chautara to China by road is about 80 kilometers. Chainpur to China is also between 80 and 90 kilometers. Now pilgrims from India and Nepal are taking the motorable route  for Kailash, Manasarobar, through Tatopani point. It takes about one week to go from Kathmandu to Kailash. Bajhang is a point on the shortest route to Tibet from New Delhi, India, and Nepal for Kailash (Shiva Puja). If Chainpur is linked to Urailekh Pass in 3 to 4 years, it will be a great achievement in the development of Western as well as Far Western Nepal. Even without all these reasons, transportation is the key to all modern development.

I visited Chautara to take a test of Nepali Language to American Peace corps trainees this week. This trip bridged a long gap between the Peace Corps Nepal and myself. I used to be a language trainer with the US Peace Corps between 1986 and 1988. When I started my job with the Peace Corps, it was of course a chance to feel good about having a close relationship with the new system. Last year, I participated in the workshop for LPI testers in Kathmandu, where I became a bona fide Nepali language certified tester. The Peace Corps requested to take a Muck LPI test after 7 weeks of Language Class in different villages of Chautara. Trainees were taking language classes with their teachers and living with local communities under the Family Stay programme. The training style of US Peace Corps has changed since I worked long ago. Back then, the training site used to be common place where every staff, guest and PCT used to take a day time American or Nepali lunch together every day. When the PCT stayed with the family, breakfast and dinner would be taken with the host family. Now it is different. All PCT’s are staying away. Actually I had visited most of the Nepalese districts during my service with the Peace Corps. This was the additional district headquarter I was visiting through Peace Corps invitation.

Both district headquarters are now congested, though their locations are different. One is on the river bank and another on the lap of a hill, a resting place, that is, Chautara. Both headquarters look beautiful with higher mountains close by. One can get a view of Mount Saipal from Chainpur, for all seasons, and of Jugal Himal from Chautara. There are plenty of valleys and mountains you can see from Chautara. Now both district headquarters are connected with black-topped roads. If the West Seti-I and Seti-II projects materialize soon, the Bajhanghi district headquarter, Chainpur, will be prosperous. The alternative route to China and the main route to Kailash will definitely foster tourism and trans-boundary businesses, as well as trans-Himalayan trade. This will ultimately help develop a backward area of Nepal and Tibet through their New Delhi connection. After Indian Prime Minister’s formal visit to China this week, opening new ventures and areas of cooperation among India and China is going to happen. Historical University revival with Nalanda University, as well as Development of the South Silk Road from China, Myanmar, and Bangladesh to New Delhi with better road ways link hold out immense prospects for the development of the region. Definitely Chainpur-Urailakh-Manasarobar-Kailash will complete this ring road with South Silk to North Silk Road soon. The three-party connectivity, cemented by history, culture, religion, and pilgrimage of the 21st century will be a landmark achievement. For another prospect, link between Chainpur and Chautara through the Northern belt will be possible as well. This can make both the district headquarters prosperous in the future.

Daulat Karki and Chakra Bishwokarma telephoned to me to conducting Muck LPI test to Peace Corps trainees in Sindhupalchok of Chautara. Four testers, singer Sunita Subba, Parbati Shrestha, Minma Tamang and myself visited Chautara as the testers. It gave me an opportunity to get to know about Chautara as one of the beautiful mountainous district headquarters. I felt, as a Bajhanghi from Chainpur, it was high time we compared our hill districts for connectivity, such as between Chautara with Chainpur, especially as the election of 2013 would promise to do something about it.

Nepal’s Foreign Policy In Times Of Change And Uncertainty By Katak Malla 1 day, 12 hours ago

Living With COVID-19 By Dr. Prabin Manandhar 5 days, 6 hours ago

The Long(er) Road to Prosperity By Ashray Bikram Pande and Samarjeet Singh Thapa 5 days, 17 hours ago