Mughlani angst is as thick as that of a disappointed Bollywood saasu-ma (mother-in-law) sulking and histrionic at the same time. 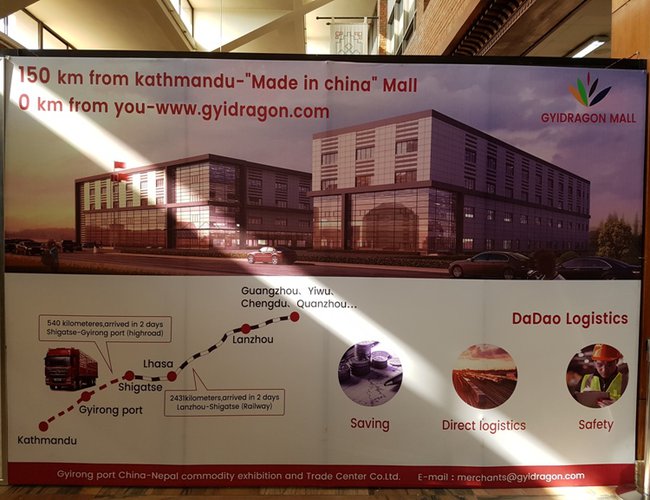 Hardly a day goes by now without an opinion piece in mainstream Indian media expressing alarm at the growing Chinese economic,diplomatic and even military cooperation footprint in its Southasian neighbourhood. Mughlani angst is as thick as that of a disappointed Bollywood saasu-ma (mother-in-law) sulking and histrionic at the same time. And the neighbourhood should be thankful that, at last, she has woken up to ground reality even though she may currently be shell-shocked with the rapidity of punches coming from up north, OBOR, Shanghai CC, BRICS, Infrastructure Bank and so on. Having jilted the Russians and cozied up to what is now Trumplandia seduced by the lure of Euro American globalization since the collapse of the Berlin Wall, she is at a loss how to explain Pakistan conducting joint military exercise with Russia or Nepal with China.

Small signals tell big stories, and there is none currently better than the big billboard advertisement pictured below. It is an advertisement for a massive and modern shopping mall Gyidragon at the Nepal-China border at Kerung (Gyirong in Chinese), which is now slated to be the new gateway to Tibet replacing Kodari which was damaged during the earthquake. The road from Galchhi to Kerung is being built at breakneck speed by the Nepal Army with only a kilometer of track left to open. On the Nepali side, there is really nothing modern since the Rana days except a customs post hastily cobbled up during the Indian blockade of 2015; but across in Gyirong there are buildings, roads and a shopping mall that one would expect to find in Shanghai or Berlin. The ad is hardly surprising, you may say, except for Chinese foresight, but not if you consider where it is located: at the Tribhuban International Airport just after one comes out of the immigration but before you pass through the scanner for carry-ons and before baggage claim and customs.

This ad is the first thing that a visitor to Nepal – Indians included – would see after clearing the immigration at TIA. You can’t miss it: it hits you in the face like no other billboard. And what one wonders about when reflecting on the Mughlani angst is when, if ever, one would see a similar ad that said, “Come to the biggest shopping mall in Raxaul!” Nepalis have been shopping in Raxaul (and Rupaidiya and Jogbani etc.) since Rana times; but little has changed since then except what has been passive background development such as the advent of electricity, synthetic yarns and mobile phone towers. Concerted quantum leap in development is seen only on Nepal’s norther border where hardly a generation back the items traded were salt on the back of yaks. Today, just across the southern No Man’s Land in Raxaul, what we have is Third World while up north in Gyirong it is First World.

Mughlani angst is not surprising, but their reaction is disturbing, less statesman like and more befitting a sulking Bollywood saasu-ma.Whenthe KP Oli government signed a much-applauded transit treaty with China in March 2016 that broke the Mughlani blackmailing stranglehold for good – which was a normal national reaction to the Indian economic blockade of 2015 (in the aftermath of a devastating earthquake where the blockade brought about twelve times more economic damage than the seismic tremor, let us not forget!) – the reaction from down south was classic Bollywood sulk. “Oh, Nepalis are stupid: Kolkata port is less than a thousand kilometers away from Birganj while the nearest Chinese port is more than three thousand kilometers away.” One had to remind the Mughlanis that the exact distance from Birganj not just to Kolkata but to Raxaul across the Sirsiya was not less than a thousand kilometers but rather three hundred and eighty-four thousand kilometers. That is the exactdistance from Birganj to the moon, and if three economic blockades in one generation (mine) is what Mughlanis think is normal, all these placesdown south might as well be on the moon as far as Nepalis are concerned.

This writer has had numerous occasions to interact with Indian friends on this issue, and I had to remind that there is no point in India’s sniping and nit-picking at the Chinese OBOR project and pressuring neighbours like Nepal not to sign up to it. It only makes India look mean, spiteful and backward-looking. Moreover, none of the scaremongering arguments about cost and dangers of loans find any traction at all in the neighbourhood.

Is the vindictive go-slow clearance at Calcutta port for Nepali goods not costing Nepal more in demurrage charges than all the aid India ostensibly gives? Did not India set West Nepal’s development back by putting political pressure to cancel a World Bank-funded and Chinese contractor won highway project and then not building it for two decades? Did it not ram the Mahakali Treaty down Nepali throats in 1996 against all sane voices of caution and then has been unable to move an inch forward in all these two decades since then? As per the agreement, Nepal was to have received additional irrigation benefits from Tanakpur from an outlet with a sill level built maliciously high: Nepal has already spent billions building canals and distribution structures on its side but not only is there no movement on the Indian side, rather the latest Mughlani communication has been that you Nepalis can build all the canals you want on your side but we will do nothing until after the 6480 MW Pancheshwar high dam is built (when, in the next century?).

The only effective way for India is to come up with a grand development narrative at least as grand and visionary as the OBOR. And this is where India and Modi have failed. His grand “Neighbourhood First” policy – announced with much fanfare at his inauguration as well as his first trip to Nepal – was quickly mothballed by the Raisina Hill Babudom back to coercive diplomacy. In Nepal’s case, the first was its disastrous blockade that not only backfired but has fertilized anti-Indian sentiments in Nepal for generations. Now, to counter Chinese development proposals, one reads news reports that Modi is slated to visit Nepal to lay the foundation for the Arun-3 project. It would be a colossal mistake if he did so that would contrast very unfavourably with the Chinese forays in Nepal.

China trying to build West Seti or very wrongly the Budhi Gandaki hydel projects is very different from India building Arun-3. The former two projects are going to be built for Nepal to end Nepal’s load-shedding and providing electricity to some 60% of the country’s population that still does not have access to it. Even though the Budhi Gandaki has now been ensnared in malfeasance with a dubious Chinese developer with a highly questionable, blacklistable past and with fears of built-in cost escalation that would rob the Nepali consumers, it is still a project FOR Nepal. Satluj’s Arun-3 or GMR’s Upper Karnali, on the other hand, are export projects where the electricity GOES ACROSS to India as per a very neo-colonial mode of development.

It is obvious after these many years that it was given as a quid pro quo by the 2006 Loktantrick leaders to the Mughlani Sahu in gratitude for support in sidelining the monarchy, violating constitutional provisions and bypassing the parliament. And the argument that it was globally tendered rings hollow: just because one does a tendering (even if were not flawed as the GMR Satluj concessions were) does not make something legitimate. One cannot tender someone else’s daughter and say it is OK! If Mr Modi came to lay the foundation stone of Arun-3, he would become a laughing stock and subject to derision as a neo-colonialist; and that is hardly a way to score points over the Chinese in Nepal.

Given that he and his ideological parent body swear by Swami Vivekananda, it might be good for them to reflect on the Guru’s words. He said political greatness or military power is never the mission of Southasians; it never was, and, mark my words, he said, it never will be. (Swami Vivekananda used the words ‘race’ and ‘India’ to mean Southasia: India as it currently exists came into being only in 1947.) The real mission in Southasian renaissance can never be military or coercive diplomacy but rather cultural and spiritual that cannot be spread with fire and sword. Are you listening to the Guru, Mr. Modi? And would you be prepared to apologize to all Nepali housewives, students and wage earners for the harm you and your Babudom did with the blockade, now that your Madhesi leaders too have disowned it?