Nepal is in the new experiment of inclusion, and federalism with three levels of governments – Federal, Provincial and Local. 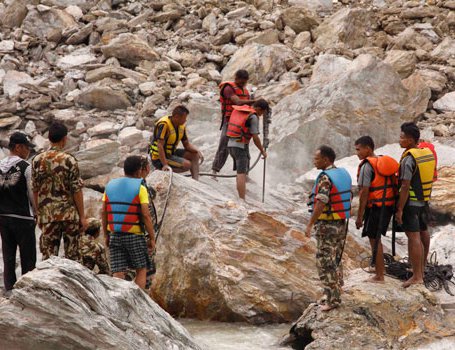 A much-awaited legislation on Disaster Risk Reduction and Management (DRRM) has been endorsed replacing the Natural Calamity Relief Act of 1982. It has covered the broader spectrum of diversity of disaster and disaster cycle management – preparedness, response, recovery and mitigation. The Act has promoted proactive DRR towards resilience building. This Act has been possible because of the joint work of the government, civil society, media and international community.

Here I would like to present my views from three perspectives: Governance context, Implementation context and Additional challenges. Hope these will be useful during the subsequent formulation of policies and regulations.

In line of the federal structure, it would be important to strengthen role and capacity of the local government, and local and community disaster management committees. Districts should only have the roles in mobilizing security agencies at the time of disaster, and control the market prices.

There should be a mechanism to support every victim during the humanitarian crisis to save her/his lives with dignity. However, there should be a policy on affirmative action to support the most vulnerable for recovery and reconstruction. Internally displaced people as well as refugees should also be included in the vulnerable population category.

Establishment of an Authority for DRR and Management is critical in the overall operation. This Authority should not be like the current National Reconstruction Authority (NRA), which is too political and too bureaucratic. The role of the Authority should be confined to coordination, facilitation, research and studies, database management and mobilization of bilateral and multilateral donors. It should neither have a controlling function nor the direct operation.

The government should avoid multiple approval requirements for the supporting agencies, and it should allow fast track operation during the humanitarian emergency. The upcoming policy and regulations should clearly state inter-agency coordination and approval mechanism. One door policy of the government will help to expedite disaster response.

It will be useful to categorize the nature of disasters based on losses and damages, as well as comparative roles and responsibilities of the national, province, district and local disaster management committees. The Authority may not be required to get involved in all kinds of disasters. This will facilitate quick response.

There must be total transparency in terms of sources and uses of funds of Central Level Disaster Management Fund, as well as other resources mobilized by national and international agencies. They must be subjected to public audit.

There must be functional complaints handling processes to address grievances from the affected population. This will ensure collaboration with the people.

In view of the new Act, there are additional challenges that the concerned agencies must address:

-      Management of scattered and disaster-risk settlements

-      Lack of preparedness for new types of hazards and epidemic such as bird flue, swine flue, industrial accidents, leakage of chemicals or radiation, gas explosion etc

Overall, the additional learning from the current earthquake and flood response should be useful for drafting policies and regulations to implement this Act. Finally, this is not to forget that the community people are the first responder to any humanitarian crisis. They must be consulted in all aspect of DRR and disaster management.

GG: Growing Local Reach By A Correspondent 2 months ago

WVIN Working For Change By A Correspondent 1 year ago

A Search For Genderless Talent By Susmita Aryal 1 year ago

Women In Leadership By Aagya Pokharel 1 year, 1 month ago

IUDP A Game Changer By Keshab Poudel 1 year, 5 months ago