The Critical Crisis Of Leadership In Nepal

We are living in extraordinary times believes Ronald A. Heifetz; one of the foremost theorists on leadership 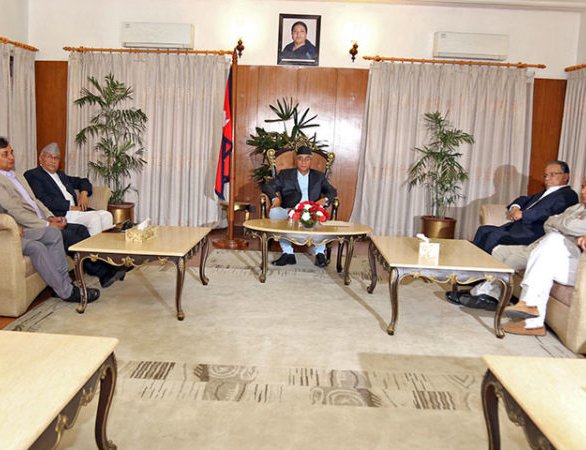 As a matter of fact, the whole world is facing a crisis of leadership. Brexit --and the departure of PM David Cameron-- and Trump as US President; with more new faces to likely follow in Europe (eg France, Italy, Spain, Portugal, Hungary, Netherlands, Denmark, Poland etc) it does look like the ‘end of history’ as Fukuyama had envisaged. On the contrary, it looks like the end of neo liberalism dominated by financial capitalism with the beginning of neo populism globally.

On hindsight, we missed the turning tide of history when we marveled at the fact that a two time British New Labour PM, Tony Blair, was asked to step down. Looking back further, about the arch conservative, Margaret Thatcher, the UK Economist (2002: Vol.13) commenting on her latest book, ‘Statecraft: Strategies for a Changing World’, has this to say, “ It is tragic that a great prime minister feels such disgust for much that her government did. It is equally tragic in the eyes of many who admired her achievements in office that she is in danger of becoming like one of those deranged people who shuffle along the street shouting angrily at everything around them while passers-by turn away in embarrassment”.

We are living in extraordinary times believes Ronald A. Heifetz; one of the foremost theorists on leadership. He calls forth a ‘new social contract’ to revitalize our civic life to grapple with this crisis of leadership.

Our own current batches of leaders have become the prisoners of their followers and hence fall prey to nepotism, favouritism and other manner of social corruption. Politics today, instead of uniting society, is actually victimized by its very fragmentation.  A fragmentation that, sadly, is held together by leaders who have constituted an oligarchic political system, both within political parties and between political parties which, instead of competing and compromising by offering citizens with different ideologies, seeks political survival through consensus politics that is manipulated by a handful of leaders.

Vote banking politics has gone to such dangerous depths that it is difficult for MPs and PMs to unite the country by, on being elected, to be governing on behalf of all citizens. Is it any wonder that MPs, who are supposed to be legislators, now seek executive roles as development project providers. It remains to be seen how this will play out when federal legislatures also seek the same fiscal favor given that they may not be from the same political parties.

Leadership is all about adaptive success through peaceful reconciliation of conflicting values. The most difficult and the most valuable task of leadership is to be engaged in realistic goal setting and to be able to mobilize people to face the challenges by providing hope, a national vision, and a national mission for action – guided by a national security policy laying down clearly and concisely our supreme national interests and national core values that bind one and all equally sans exception.

Mistakenly, in a multi-party parliamentary democracy, when we choose our parliamentarians we think we are choosing our rulers. Actually it is not so. We, as sovereign people, are really choosing our legislators who in turn choose the service providers. Who in turn are required to be accountant for their actions and inactions by respecting the rule of law.

Ronald Heifez tells us, 'authority' needs to be seen as the “conferred power to perform a service”. It is based on a quid pro quo, an exchange or social contract. It can be taken away and rendered to others who can fulfill the service to the sovereign people. Thus we authorize our leaders to do things for us and not to dominate us, or to rule over us. Authority is not identical to dominance and deference so the theory goes. Which may be so in the animal kingdom of gorillas, apes and chimps: but not inthe society of human beings.

Authority should be no more than required to carry out one’s responsibility. Checks and balance is a must to control the perversion of power.  In a political oligarchy, this necessity of checks and balance is totally eroded as room for free speech and dissent is reduced to a bare minimum. We saw what happened during the debate on the Constitution just prior to its promulgation by the second Constituent Assembly.

We saw how the results of the public opinion sought by the Constituent Assembly on the major features of the Constitution were never made public. It is common knowledge that nearly 90% of the people were opposed to secularism, federalism and, further, they wished to have a directly elected PM.

Another method of checks and balance is when we as citizens exercise leadership too. But this cannot happen when party politics is brought to roost in public institutions, educational institutions, media. When it has captured civil society and even entered individual households with daily politicking as a past time within the family. As when the family members choose different political parties for access to power centres for their family interests rather than commitment to any particular ideology. Thus the space between state and society is minimized. Such a reduction is nurtured by inclusive politics that grants quotas and privileged access to the state and its resources on the basis of creed, caste, community and not class.

For a genuine democracy we count as citizens. Each vote must and should count. It is the citizenry that must get our leaders to do what we want for the nation, for our community and for the future of our children and their children. We, as citizens, must exercise leadership to elevate our leaders to a higher moral plane.

Most of us have grown up with a sense of powerlessness--deferring to parents and grandparents; to teachers and headmistresses; to political, economic and social leaders; and, not least, to the coercive powers of the state’s security apparatus. Where citizens act like consumers of the spoils of power then, quite naturally, democracy gets reduced to acts of populism from an expectant electorate.

Is it any wonder then if we get the leaders that we deserve? We have only ourselves, as individuals, to blame for the crisis of leadership.

We, as citizens, must inculcate a new concept that of ‘good followership’. We must begin to believe that it is a part and parcel for good leadership. Without this new way of thinking amidst us, is it any surprise that we have political leaders totally devoid of any sense of statesmanship. Should we not begin to say unto ourselves that in the end analysis we, the followers, are the masters of our own destiny as we have got the leaders we deserve.

We have missed the dawn of the Emergence of Asia owing to the utter lack of vision of our political leadership. Fortunately, a late dawning did temporarily occur in the mind of PM Oli who, following the rude shock from India’s five month economic blockade that tumbled GDP growth to 0.77% from his planned 6.5% in 2015-16, adopted the strategic policy of king Mahendra to diversify economic and political relations.  It should be said that this wisdom is as old as our grand mothers’cliche, namely “never to keep all one’s egg in one basket”.

The current global scenario is one of what Ruchir Sharma in his remarkable book, The Rise and Fall of Nations Ten Rues of Change in Post Crisis World”  (2016) calls a new era of “depopulation, deglobalization and deleveraging”.

Which makes me wonder whether Nepal can deliver the much-hyped ‘economic revolution’ after the full implementation of the Republican Constitution of 2015.

It is my submission that it will never happen unless we have a radical change in political leadership all round and, hopefully, these go to reform minded leaders. This is unlikely in the current oligopolistic polity driven by outdated feudal-minded leaders subscribing to out dated socialism, communism and Maoism but actually being sustained by crony capitalism.