Save Federalism Before It Meets An Accident

Kathmandu bureaucracy is trying to keep power and resources within it wherever possible. On the other hand, local government units are not adequately resourced and empowered. 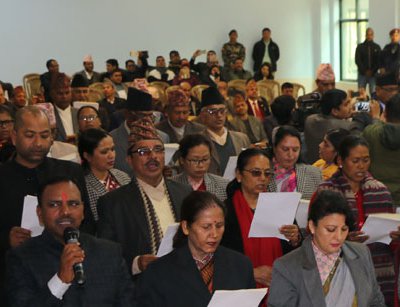 Federalism is the sharing of power between national, province and local governments. In post-conflict Nepal, federalism was introduced to build an inclusive nation by addressing longstanding grievances of the poor and oppressed people.

When it comes to the distribution of resources between the central, provincial and local governments, it is even more ad-hoc. Kathmandu bureaucracy is trying to keep power and resources within it wherever possible. On the other hand, local government units are not adequately resourced and empowered. They are lost in their actions despite they have been functioning for seven months.

With 990 parliamentarians, over 100 ministers and 753 local government units, the current model of federalism in Nepal will not be sustainable. Federalism has been the agenda of political parties, but sadly it has not been the agenda of a common citizen. People generally don’t understand what it means to them and how would they participate in local governance processes. This is the greatest risk.

Federalism requires a complex web of institutional and fiscal arrangements. We need to do the following:

-        Improve understanding between Kathmandu bureaucracy and the newly elected representatives about their comparative roles, responsibility and accountability.

-        Strengthen public financial management systems including internal controls and procurement at all levels.

-        Improve public awareness on federalism – what is it, how does it function and what it means for common citizen?

-        Conduct a scientific study, and the merge and reduce local government units from 753 to 357 with an average 80,000 people under one rural municipality. This will achieve economy of scale to deliver basic services at local level.

In my view, the national government should be efficient with slim structure, and the local governments should be stronger in the spirit of devolved authority, downward accountability, and inclusive development. The seven provinces should not be developed as another seven Kathmandus holding authority and finance. The provinces should have more coordinating and facilitating works for internal coherence and synergy on national agendas and programs. Self-governance should be exercised at the local government level, with local people holding local representatives accountable for their action or inaction.

In the changed context, political restructuring should also proceed in parallel with state restructuring. There is a complex relationship between federalism and democratization.There must be political reform of the current political system in the areas of internal governance, inclusion and party financing. The political parties should be more strengthened with national character and devolved structure.

In the face of systemic corruption in the country, there must be transparency and integrity in political financing. There is urgent need that the government comes up with a mechanism to regulate and channel political financing at the federal, provincial and local levels.

There is an opportunity to make federalism work if the political parties have will, capacity and integrity to save federalism before it meets an accident.

Why To Regulate Electricity Sector In Nepal? By Dr. Ram Prasad Dhital 5 days, 16 hours ago