In Nepal’s circumstance, the post 2004 trade data clearly shows that the surging import has instead eroded the export 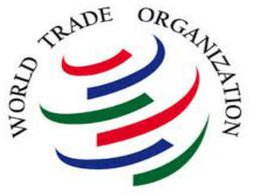 The Marrakesh Agreement on establishing the World Trade Organization, WTO, states in its Preamble that the parties (member states) relations in trade and economy should be conducted with the purpose of raising standard of living, ensuring full employment, increasing real income, and ensuring effective demand creation and expansion of the production of and trade in goods and services. And, such relations should allow for the optimal utilization of available resources to attain sustainable development. It has further emphasized the need for a positive effort in all the developing countries and specially in the least developed countries, to secure a fair share in growth and international trade that meets with their needs of economic development. Against this backdrop, this short article initiates a discussion if the spirits of the Marrakesh Agreement have been translated into action and accomplished the objectives / outcome in Nepal’s international trade since her accession into WTO. 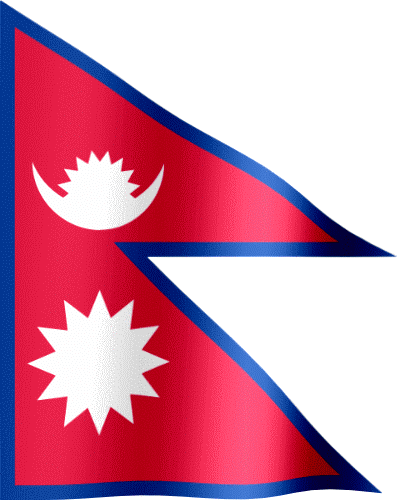 Nepal became a member of WTO in 2004. She was the first least developed countries to take WTO membership by accession. Prior to this, Nepal had also taken initiative for accession into the General Agreement on Trade and Tariff, GATT in 1989 by submitting her desire, and had received an observer status since then.

Fifteen years on since joining the WTO in 2004, it is timely to retrospect if Nepal is close to achieve the spirits and objectives as mentioned earlier. While doing so, this article also acknowledges that Nepal’s international trade or the post 2004 development impacts in Nepal, are contingent upon many factors, of which becoming a member of WTO is a part of the whole gamut.

Nepal joined the WTO with a natural expectation that this platform would be helpful for Nepal to attain the long overdue broad based economic growth by reaping the benefits of liberal trade policies and regulations based on WTO framework. Necessary reforms in legal and regulatory framework were carried out meeting the WTO commitments. It was also expected that Nepal's bilateral transit trade relations with India and other neighboring countries will be more supported by the international agreements and conventions. Along with carrying out reforms in laws and procedures, Nepal started cutting tariffs to fulfill the commitments made while entering into WTO.

These reforms were important departure in Nepal’s economic and trade policies, which reinforced the policy prescriptions of Washington Consensus and Structural Adjustment Programs implemented at the behest of IMF and the World Bank in the 1990s. The policies of import substitution were gradually replaced by liberal import policies. Protections and quotas were in general abolished. The termination of WTO Agreements on Textiles and Clothing in 2005, and phasing out of Multi Fiber Agreement by the US, hit hardest the Nepal’s thriving garment industry before it was able to stand on its own foot and be competitive. Gradually, Nepal started losing her trade competitiveness. Trade deficit widened year after year, with a direct bearing on declining manufacturing and job opportunities, among others. 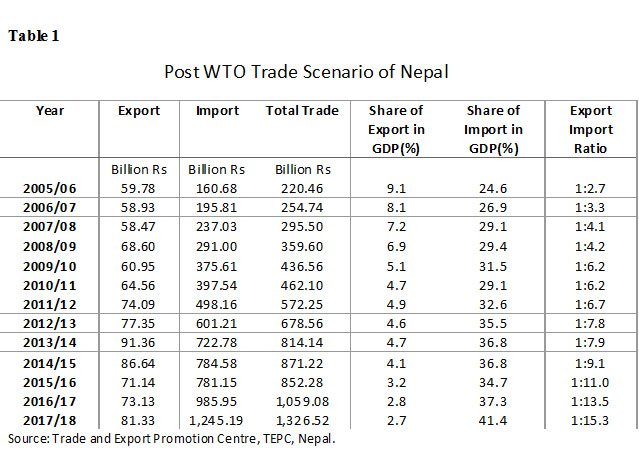 Generally, a sharp increase in import is not considered a problem when a country is at developing stage. It can be an indication of the economic expansion. Specially, if the import is of industrial raw materials and of the capital creating goods, then it will add on economic transformation; industries grow and production will rise; more jobs will be created and people’s income will increase. The import will also give the customers more choice with comparatively at a lower price. However, such a rising import should yield to increased domestic production and export. In Nepal’s circumstance, the post 2004 trade data clearly shows that the surging import has instead eroded the export. The worn export sector resulted in a shrinking domestic production. The manufacturing sector which was around 9 percent of GDP during the early 2000 has dropped to around 5.5 percent currently. According to the Economic Survey, 2017/18, the growth in manufacturing sector was averaged merely at around 3 percent in the last decade. The unemployed population continues flocking to Middle East or other potential job markets abroad.

The alarming trade deficit has placed major challenge to attain the improved living standard through trade and economic endeavors, to ensure for employment, and increase in real income through effective demand and expansion of production, as aspired while joining the WTO. Though there has been some noticeable improvement in social and human development sector, yet due to a low per-capita income, which is at little over US$ 1000.00 in 2018, Nepal still remains as one of the least developed countries. The low per capita income has been the major obstacle for Nepal to graduate from LDCs status.

The Trade Policy, 2015, also admits that Nepal’s trade deficit is widening even after joining the WTO. Though the membership of the WTO had extended opportunities for easy market access for Nepali products with some special and differential provisions of Duty Free Quota Free to the developed markets. However, various non-tariff measures particularly SPS and TBT related provisions imposed in destination market hindered expected market access for Nepali products.. WTO membership also provided a platform to negotiate and secure better market access. Nepal could not stand strong in this field either due to capacity and other constraints. The mobilization of technical and other assistance, as well as trade preferences available under the WTO framework for least developed countries, could not be adequately utilized for various obstacles so as to narrow down the gap.

Thus, it is a subject of a critical examination where Nepal lagged to take benefit from the available technical assistance and preferences by WTO such as DFQF market access and other regional and bilateral mechanism such as SAFTA, and whether such available supports were sufficient to withstand Nepal’s competitiveness in international trade. Additionally with the reductions or elimination of tariffs by many countries and introduction of new system of DFQF preferences margins to LDCs like Nepal have been eroded making products of such countries further less competitive in importing markets.

The lessons learnt so far strongly suggest that for certain years positive differences and trade preferences are necessary along with full priority to domestic production enhancement through value chain development efforts. Reciprocity or one size fits for all approach cannot help to an economy that is not yet competitive enough. This has to be also considered by our major bilateral trading partners: India and China, which have emerged as global giants with scale productions and heavy subsidies in many of primary products. As the custodian of rule based international trade, the WTO itself should retrospect its support to Nepal, identify the constraints, and find a way out in collaboration with the Government of Nepal. The causes thus have to be scrutinized. Though not in isolation, but in a holistic manner.

We could notice that the Government has been pursuing various institutional and legal reforms to improve the overall trade and investment climate. Major trade and investment related laws have been enacted or in the last leg of enactment. One Stop Service Center has been established to provide hassles free and predictable services to the potential investors and businesses. The investment summit targeted for foreign direct investment to meet the funding gap in the economy has been concluded successfully. Approach paper for the 15th periodic plan, that lays the foundations not only for growth and development for the next five years but also for meeting the Sustainable Development Goals(SDGs) by 2030, has recently been approved by the national development council. This is a high time that the WTO and the international development partners such as the IMF, World Bank, ADB, including the major bilateral trading partners such as India, China, and USA, extend their preferential supports to revert Nepal’s ever widening trade gap and bring it into a sustainable path. Thus, only the pragmatic and country specific supports by international institutions and major bilateral trading partners will help translate the spirits of the Marrakesh Agreement into action and results.

The Sociology Of Flood Management: Learning From Below By Dr. Dhruba Gautam and Pratistha Pyakurel 2 days, 21 hours ago

Here’s How Governments Can Reduce The Impacts Of Asia’s Devastating Flash Floods By Rabindra P. Osti 1 week, 2 days ago

Make In Nepal By Hemang Dixit 1 week, 3 days ago

The Inspiring Story Of Booker T. Washington: From Slave To Advisor To US Presidents By Purna B. Nepali, PhD. 2 weeks, 2 days ago

Communist Party of China centenary celebrations Reading between the lips By Abijit Sharma 2 weeks, 3 days ago