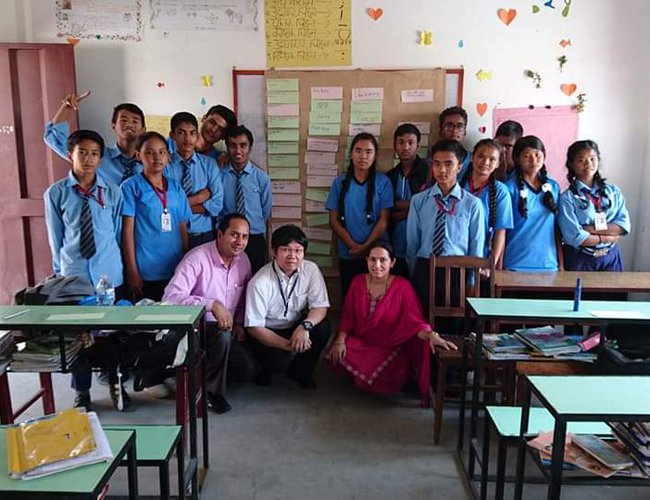 The necessity of global access to the disaster prevention education was raised by the Third United Nation World Conference on Disaster Risk Reduction in 2015. In response to that, the “Sendai Framework For Disaster Risk Reduction (SFDRR: For Children)” was published by the Children in a Changing Climate coalition. On the other hand, it is pointed out that it is difficult for learners to deal with unexpected problems even if they attend classes to acquire disaster knowledge and evacuation drill assuming a certain expected disaster, also possible they end up losing their independence for disaster risk reduction.

This paper has taken up the case where Rotary International implemented the “SFDRR: For Children- Nepali Edition” into disaster prevention education in Nepal and has verified the effects of the education. The results of the study have revealed that when the “SFDRR: For Children” was used for the disaster prevention education in class, the students did not only improve their knowledge and skills but also strengthened their altruistic orientation. It suggests the possibility that children, who had been subject to protection, can become a player in taking the initiative in leading the disaster risk reduction activities in communities.

Thus, it is considered that the “SFDRR: FOR CHILDREN” has a high capability to enhance resilience in participants, their families, and communities as supplementary reading material for the disaster prevention education.

At 2:46 pm on March 11, 2011, the earth tore apart with a sudden roar, cargo ships washed away by the tsunami destroyed the towns while heading for the mountains, and houses and cars scattered down the river and across the ocean. It destroyed 1.13 million houses and claimed the lives of more than 18,000 people; the afternoon of the peaceful Tohoku region, filled with the pleasant smells of plums, quickly turned into hell. The tremors of the archipelago also caused an unprecedented nuclear disaster, and it feels like just yesterday that the world froze in shock. Since the unforgettable Great East Japan Earthquake, great earthquakes have repeatedly been occurring in Nepal, Ecuador, Italy, Kumamoto, Indonesia, and Hokkaido-a sign that earthquake disaster risks are ubiquitous around the world. And according to the Intergovernmental Panel on Climate Change Fifth Assessment Report (2013), regardless of the future scenario of greenhouse gas emissions, global average temperatures will rise toward the end of the 21st century, and it is predicted that disaster risks from climate change will increase. Furthermore, according to the United Nations International Strategy for Disaster Reduction (2016), the total deaths from disasters that struck the world in the 20 years from 1996 to 2015 amounted to approximately 1.35 million, 90% of which focused on the middle to low income countries.

"Children in a Changing Climate: CCC" is a global network of international 3 NGOs who practice the United Nations Children's Fund and disaster prevention education. This network created the "SFDRR: FOR CHILDREN" (2015) to help children around the world, regardless of whether they are developed or developing countries, share the global philosophy of the "Sendai Framework for Disaster Reduction" and enhance their disaster prevention capabilities. They are distributed by the PreventionWeb of the United Nations Disaster Risk Reduction for disaster prevention education in all countries and regions.

. Another study conducted in Nepal states that lesson-centered disaster prevention 4 education raises risk awareness but does not help students understand the importance of pre-disaster measures and take action to mitigate disasters (Shiwaku 2007). Hence, there is a common understanding of the need for disaster prevention education, but there is controversy over the methods and effects of education. 2.2 Disaster Prevention Education as International Cooperation The 42nd General Assembly of the United Nations in 1987 designated the 1990s as the “International Decade for Natural Disaster Reduction.” This was the result of a widely shared view that building a disaster-tolerant society and breaking the vicious cycle of disaster and poverty is a major premise for sustainable development in developing countries.

As for public education, disaster prevention education has also been implemented in many countries. Chapter 36 of Agenda 21: "Promoting education, public awareness and training," adopted at the United Nations Conference on Environment and Development (1992), states that education is critical for promoting sustainable development. Disasters, especially in developing countries, are often a negative factor in slowing development. Improving people's disaster prevention capacity through disaster prevention education is considered to beneficial in both development and human security. However, economic policies are prioritized in many developing countries, and the allocation to disaster prevention measures, such as the strengthening of social infrastructure and disaster prevention education, is scarce. As for public education, many children are attending schools in vulnerable buildings with high disaster risk. For example, many schools in Nepal have low earthquake resistance and are vulnerable as they are built with traditional brickwork methods. Research shows that the risk of school children being affected by an earthquake is approximately 400 times that of Japanese children (GHI, UNCRD 2001). Thus, based on the belief that frequent disasters hinder the development of developing countries, the first World Conference on Disaster Risk Reduction was held in Yokohama in 1994, and adopted the "Yokohama Strategy."

Child Security and Disaster Prevention Education The Human Development Report (1994) identifies natural disasters as a threat to human security. The Commission on Human Security (2003) states that economic crises, natural disasters, and conflicts are three types of crises that impact human security. In particular, the children who are classified as vulnerable group to disaster face a security crisis once a disaster occurs, as they are exposed to threats to peace, development, and human rights in every aspect of society. Threats to peace faced by children during a disaster include earthquakes, tsunamis, landslides, floods, and hurricanes. Physical variability in natural phenomena is more likely to kill children with less capability to cope with disasters, as they have less knowledge, experience, and physical fitness compared to adults. Also, risks jeopardizing the survival of children, such as outbreaks of infectious diseases due to poor hygiene and riots that are likely to occur during social disruptions, may increase. As for the threat to development, we must consider the deficiencies that children encounter in disasters. For example, if a parent is killed or a parent's workplace is damaged, the household income is lost, causing severe poverty. In that case, the remaining family must support the household, and children cannot attend school as they have no choice but to work. Also, if children become isolated during a disaster, their injuries remain untreated, and symptoms may become severe as they are unable to seek help from medical facilities such as hospitals themselves. As a result, treatment such as dialysis for children with chronic diseases is interrupted, and children who need continuous medication may not be able to access medicine. In addition, in poverty situations after the disaster, risks to children's lives are expected to increase due to trafficking and sexual exploitation that are likely to occur with social turmoil. Finally, regarding the threat to human rights, children may be deprived of their rights if they are from a family that suffers from poverty caused by the disaster; they are not only forced to work at home or factories, but also forced 6 labor by trafficking. Access to the hospital is also restricted at times of injury and illness caused by a disaster, threatening their rights to live. Furthermore, adolescent girls are often forced to marry undesired due to the worsening economic situation at home. They cannot go to school and are deprived of the right to education and civilized life, and the dignity of the children is significantly denied. Thus, children's risk from disasters is amplified by the regionality due to the fluctuation intensity of natural phenomena that threaten peace, and weak living conditions for children, which threaten development and human rights. As a result, disaster victims around the world concentrate on children from poor families in developing countries. Children are deprived of school opportunities and the right to live healthy, which can lead to a chain of poverty and fix or widen socioeconomic disparities. Therefore, from the perspective of child security, it is essential to focus on reducing risks to survival, living, and dignity when conducting disaster prevention education. It is crucial not only to acquire knowledge and skills on disasters but also to deepen understanding of socioeconomic groups, generations, gender, and other fairness, to enhance disaster resilience.

In March 2015, in Sendai City, Miyagi Prefecture of Japan, which was affected by the Great East Japan Earthquake, approximately 6,500 participants including representatives from 187 countries, international organizations, researchers, and NGOs joined to hold the 3rd World Conference on Disaster Risk Reduction to formulate a global disaster prevention framework that remains in action for 15 years until 2030 The "Sendai Framework for Disaster Risk Reduction" was adopted as an outcomes document. Immediately before the conference, UNICEF has issued a UNICEF STATEMENT (2015) indicating that children are the most vulnerable to disaster and the importance of positioning children as players of a significant role in disaster prevention, mitigation, and reconstruction. The Global Network CCC, which shares these ideas, has compiled the Sendai Framework for Disaster Prevention into content that is easy for children around the world to understand. 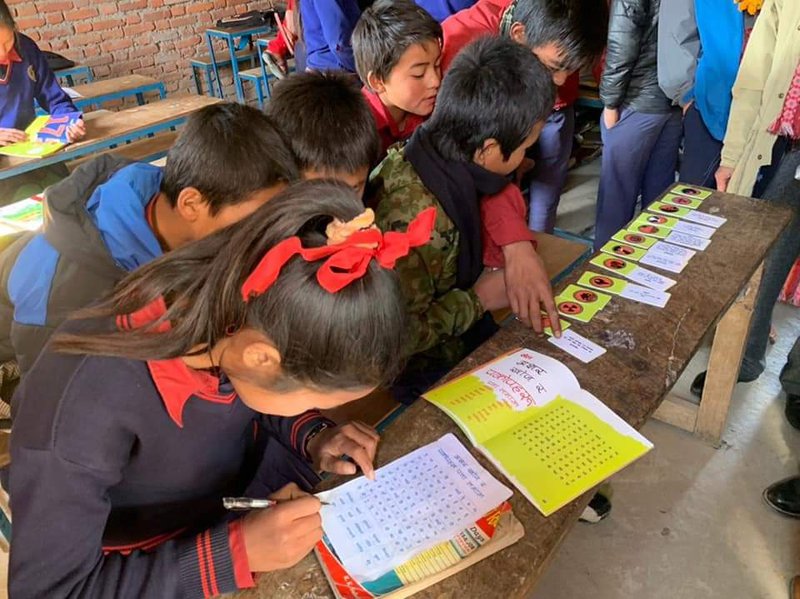 Excerpts of his research paper on The Impact of Disaster Prevention Education implementing "Sendai Framework For Disaster Risk Reduction: For Children ": A Case of Aid for Nepal

Rotary International D 2820, WASEDA University. He can be reached at heisei-hotel@cream.plala.or.jp