Nepalese migrant workers, some 500, at the Nepal-India border are doubly victimized, first they lost their employment and second they were not allowed to enter Nepal 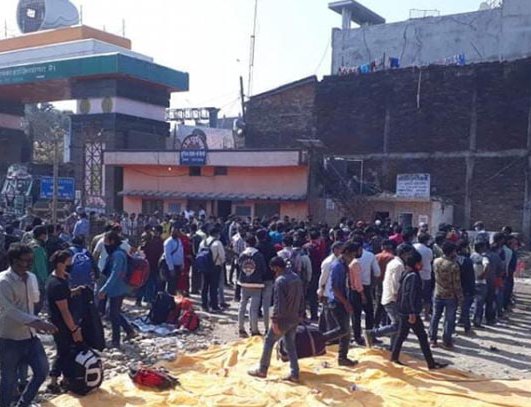 The COVID-19 situation is evolving rapidly, and migrant workers are some of the most affected across the world.Migrant workers are already vulnerable due to poorliving conditions, limited access to healthcare and basic services, and exploitativelabor systems. With lockdowns, loss of livelihood and harsh containment measures, they are now disproportionately at risk.

High Commissioner for Human Rights, Michelle Bacheletaid in a statement that she was distressed by the plight of the informal migrant workers affected, many of whom were, in effect, forced to leave the cities where they worked at just a few hours’ notice, unable to pay for rent or food.

On March 23, Nepal government has closed its open border with India, and imposed nationwide lockdown to contain the spread of the coronavirus. There was little cooperation from both India and Nepal on border regulation and supporting the migrant workers on both sides with food, shelter and healthcare. It means that thousands of Nepalese who want to return home are stranded at the Nepal-India border. It is worth mentioning here that the majority of Nepalese migrant workers in India, largely undocumented, are involved in semi-skilled or unskilled jobs with limited labor rights and social security.

Nepal’s economy is depended on remittances and Indiahas been one of the key destinationsforNepaliworkers, largely from the hills and mountains of the Western Nepal for the past several decades and continues to be thelargest destinationcountry.

Nepalese migrant workers, some 500, at the Nepal-India border are doubly victimized, first they lost their employment and second they were not allowed to enter Nepal.They are facing greater hardship at this time as their health and livelihoods are at risk – they lack adequate water, proper food and shelter facility.Not allowing the citizens to enter to their own country is inhuman and it is against human rights. Any kind of stigmatization leading to disrespectful and discriminated behavior against people with symptoms of COVID-19 is immoral.

Nepal did a good job by evacuating 175 Nepalese from the Chinese province of Hubei and put them on quarantine facility in Feb 2020.This should be in fact the job of Nepalese Embassies/Consulates across the world to protect Nepalese as we have seen how other countries have evacuated their citizens, including from Nepal.

Nepal government managed to keep over 30,000 Maoist combatants to 7 main cantonments and 21 satellite cantonment sites even during the time of centralized governance when Nepal was emerging from the violent conflict in 2006. What happened to the new DRR and Management Act that has also defined “pandemic flu” as a disaster? The functioning status of all kinds of Prime Ministerial Council, Home Ministerial Executive Committee, Chief Executive National Authority, Provincial Disaster Management Committee, and District and Local Disaster Management Committee in the new federal set-up are the searching questions.

It is possible and it is the duty of the functioning government to bring back stranded Nepalese migrant workers, quarantine them, provide food and health facilities, and send them to their homes safely.The government has to bring the DRR and Management Act into action and improve coordination among the three tiers of majority government: federal, provincial, and local.Let us provide additional resources and support to the local governments from the disaster funds or constituency development funds.

The migrant workers at the border say that the government does not have to give them jobs, but they must be allowed to return their homes. I advocate that they have right to return home. They have a right to life with dignity. In parallel, Nepal should also work with India to develop a joint strategy to regulate the border for the flow of people and goods.

Are The Two Pre-Requisites Of Our Existence: Science And Religion Irreconcilable? By Prof. Dr. Akal Bahadur Singh 2 weeks ago

Politics And Economy Of Nepal By Dr. Tilak Rawal 2 weeks, 3 days ago