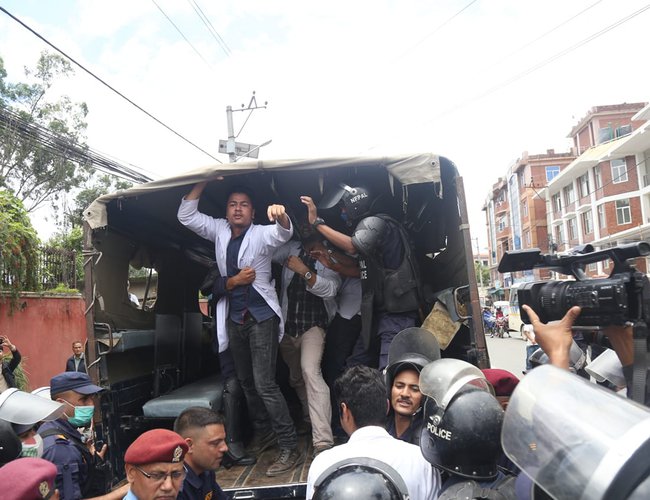 It was a moment to relish at a Track-II talk shop over a decade ago. Nepali media was running purple prose on the Mahakali controversy but the contrasting silence in the Indian press was deafening. A Delhi-based Track-I retiree was waxing eloquent on how “we Indians” wanted Himalayan water development that was to benefit the neighbours but those ungrateful ones opposing it were motivated by pure “anti-Indianism”. At that point, the redoubtable Ashis Nandy jumped up objecting that he was very much an Indian but not part of the “we Indians” that the eminent gentleman was referring to.

This episode captures the cultural schizophrenia that all of India’s neighbours have to live with. Many of us – Nepalis, Bangladeshis, Srilankans and Pakistanis – have Indian friends we collaborate with closely in academia, business, social activism or cultural events. In the earlier decades, such invoking of anti-Indianism by the Babus of Delhi to explain away their failed policies used to be merely embarrassing, and most of our Indian friends used to whisper to us, “Ignore him, he is a jackass!” Today, this “anti-Indianism” has gone worrisomely viral thanks to two mutually reinforcing factors: Delhi Babudom’s interfering in the political affairs of the neighbours above and beyond normal diplomacy, including regime change in Nepal, and the corresponding backlash that is carried not so much by chattering elites as in the past but by mass-based parties at the receiving end of that highhandedness. Interestingly, the most anti-Indian rhetoric is spewed forth by parties that were either the creation of, or based on, Delhi’s munificence. And it is not just the Maoists who are the latest in exhibiting the wrath of the jilted lover: the Madhesh-based parties too are sulking in the corner, unhappy with Hindi imperialism in the Maithili-Awadhi bastion epitomized in the oath-taking flip-flop of Parmananda Jha.

In probing this phenomenon of anti-Indianism, before one lists the litany of neighbourhood grievances, it is important to keep two inter-related aspects in mind. The first is to understand the “Indianism” that the neighbours are so very against, and the other is to search for more in-depth causes. If being pro-Nepal or pro-Bangladesh is being anti-Indian, then there must logically exist severe problems with Indianism, even when there are many things justifiably Indian that are absolutely loved by the masses on the rims. For example, except for westernized snobs, Bollywood is everyone’s favourite, notwithstanding an occasional Hritik Roshan riot for (mis)perceived utterances by these celluloid celebrities. Indian goods, from paan to paints, are in high demand. Nepali youth who can, make a beeline for Indian colleges and those who can’t head for the Indian job market even as their friends back home demonstrate against India for many cross-border grievances.

One of the worst examples of Indianism is the special security check at Kathmandu airport: Nepal was punished with an air blockade for six months for what was obviously an Indian problem (Kashmir) created by an Indian failure to stop in Amritsar the hijackers of the Indian airlines to Kandahar in December 1999. But Nepal was demonized in the 24-hour Indian news channels and forced to accept a humiliating Indian plan that is a constant reminder to all air travellers every day that mutual trust is at rock bottom. Current bout of anti-Indianism going viral in the lower ranks of political parties stems from the Indian support for the regime change of 2006 that apparently came with hidden quid pro quos of Indianism. Extending the security plan of 1999, Delhi’s security Babus are pressuring the current Nepali dispensation for a carte blanche to arrest and extradite any suspect to Delhi. It would not only violate all international norms but also erase the respectful precedent established in 1965 in the case of chief minister Pratap Singh Kairon’s assassin Sucha Singh. The other “understanding” was to give citizenship to millions of migrants violating due process, with tragic results: many criminal elements in UP and Bihar took advantage of it, thus contributing significantly to the current insecurity in the Tarai and across.

It is the third quid pro quo item – water resources – that elucidates Indianism and contrasts it in Nepali minds with “Chinese-ism”, if one may invent a non-existent term. Hastily after regime change in 2006, the Seven Party Alliance and the Maoists pushed into place a water resource development policy that was not Nepal-centric but export-led which completely ignored the importance of regulated water. Violating the letter and spirit of the 1990 constitution’s Article 126 (as well as the interim constitution’s Article 156), they awarded plum sites to Indian developers, not for ameliorating Nepal’s crippling power shortage but for export to India. In contrast, the Chinese have offered Nepal $200 million of soft loan to develop about 110 MW of power for Nepali consumption. Can such incidents of Indianisms – from border encroachments to misplaced efforts to build an artificial Lumbini in UP to lodging comical diplomatic protests when a Bangladeshi millionaire put up money to build a replica of the Taj Mahal near Dhaka – be generalized under some theoretical reasoning to search for deeper causes behind these symptoms?

The roots of anti-Indianism seem to lie in the nature of the Indian state, which is legally the successor state to the colonial British Raj: indeed Delhi and not Islamabad inherited the Raj residency in Lainchaur. This continuity carries with it not just the burden of past colonial history but also its politics as well. As the political economist Samir Amin puts it, unlike Russian development based on a urban-bureaucratic alliance that bled the peasantry white, and the Chinese model equalizing rural peasants over urban workers thus re-shaping Chinese social relations, India’s Nehruvian plan was a “peripheral capitalist” model. It did not end colonialism but merely changed the driver of the machine from white to brown with the global capitalist philosophy and mission remaining the same. As a result, India’s continuing internal colonization has produced, six decades after independence, a raging Naxalite mutiny that has engulfed half its districts. Its external economic colonization efforts – from Farakka to Mahakali to Wullar – have led to bad blood in the neighbourhood. Within and without, the political economy of unfair resource capture enterprises pursued by Delhi’s Babudom has produced similar results.

The successor state also inherits, to use terms by Foucault and Edward Said, the hegemon’s “master narratives” of knowledge and power used for domination. When the British ruled from Kashmir to Colombo and Khyber to Khasi, calling the jewel in the crown “India” made sense. Upon partition, the new Republic of Indus-stan chose to call itself Pakistan; but Delhi should not have psychologically appropriated the Indus or the Persian name that followed from it. Calling the Republic of Ganga-stan as “India” was thus a civilizational hijack that constantly puts the rim countries on alert and feeds perennial suspicions of Indian moves and motives in many areas: are Pakistani ustads or Nepali Sur Sudha playing “Indian” musical instruments? Are the Vedas and Sanskrit not Nepali? Is Mughal history or Rabindra Sangeet not that of Bangladesh as well?

With Nepal being forced to re-examine its internal identity with the current Loktantrick experiment, it is equally imperative to examine its external, civilizational identity as well. And one must begin with some myth-busting: Nepal-India relations are not “ancient” as official syrupy speeches would have it. They are only six decades old because there was no India of today before that, only the Raj in Mughlan. It is these six decades that need reflecting over so that better development than has occurred in the past – economic, social and cultural – can take place in the region. Just as Germans or Spaniards can call themselves “European”, South Asians too need identify themselves as members of what Toynbee labels the “Indic” civilization. Such ecumenical thinking can happen only if, as Foucault and Said warned, a hegemonic hijacking of that identity is ended.

{Appeared in Spotlight 21 May 2010, Kathmandu. www.spotlightnepal.com }