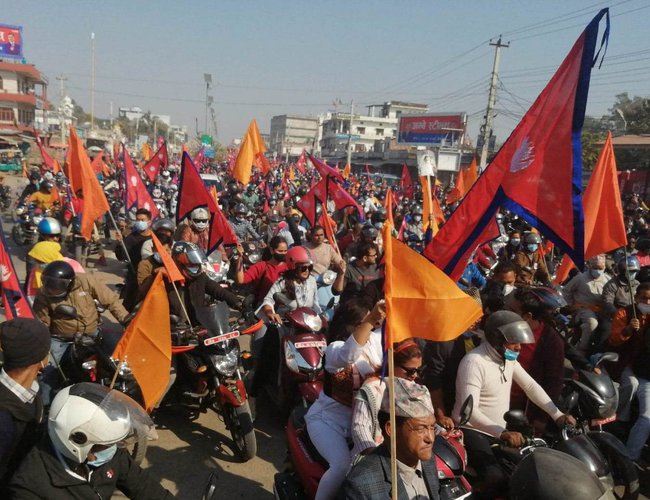 An old Rig Vedic line praising Goddess of wisdom Saraswati as the Word Supernal points out that until we cleanse our thoughts by getting away from the thrall of improper words, our actions will neither be correct nor lead to worthy ends. This truth has now been brought painfully home to Nepal's current political discourse. Ostensibly noble sounding Left slogans that dominated the country's political thinking for decades are now seen as nothing more than seductive advertising of snake oil salesmen, words such as "agragaman" (moving forward or progression as opposed to regression which is "pratigaman").

Indeed, the Loktantrick (dis)order of 2005 was gifted by Mughlani spooks and EuroAmerican INGO busybodies to party leaders who had proved dismal failures a decade earlier, but were nevertheless carried to power by a self-styled "civil society" cravenly beholden to those leaders. It is increasingly coming to resemble a bus hastily assembled from junkyard parts post 2015 earthquake, now stuck in a blind alley. Moreover, the drivers and conductors are fighting each other, insisting that they can take it forward despite the impenetrable wall ahead and their demonstrated incompetence of the last three decades in matters related to statesmanship and statecraft.

The duped passengers had been seduced into believing that the only way was forward (agragaman) and that the squabbling incompetent drivers would get them to their destination ("Sambriddhi" or prosperity). What the Left's distorted discourse has propagandized as regression ("pratigaman"), i.e., backing out of the blind alley to the point where the wrong turn was made to head in the right direction, would normally be called a wise move.And for Nepali politics (as well as its international underwriters) that wrong turn is the November 2005 12-Delhi Deal, the subsequent induction into a resurrected but date-expired parliament of Noida-sheltered insurgent terrorists, and the jettisoning of the 1990 constitution.

Politically, the 2005/2006 shenanigans were not what ended the Maoist violence but rather deified and enshrined it in Nepali governance. The indigenous effort to end it was the 29th January 2003 ceasefire that was ultimately sabotaged by both the Mughlanis who felt their sheltered acolytes were losing their asset value and the political parties who felt the King would get the credit for bringing the violence to a close.

Now, if the massive street demonstrations of the past weeks in major cities of Nepal are any indication, it does seem that many passengers are beginning to have serious second thoughts. In the slogan of demonstrators, one word was jettisoned and replaced by another that signifies a mental cleansing of the political discourse. The slogan of the Monarchists used to be "Raja aau desh bachau!" which is now "Raja lyau desh bachau!" The shift from "aau" to "lyau" is significant: it is no longer "O, King! Come save the country!" but "You incompetent party neo-feudals! You better bring the monarchy back to save the country!" It is no longer an appeal of the helpless to the King to come and rescue them: it is a serious warning to the Loktantricksters to move out of the way.

There were also diplomatic messages in the last weeks from our two neighbours that they too see the blind alley Nepali politics is stuck in, that perhaps the drivers as well as the bus itself will be junked anyway. In that eventuality, subtle shifts were apparent in their posture and realignment to protect what they see as their interests in the buffer zone that is Nepal.

Modi's 2015 adventurism with the blockade, which saw him overnight plunge from being the most popular Indian in Nepal to the most despised, cost India dear and perhaps for generations to come. By mistakenly believing that the "roti-beti" relations between the two countries were limited to a few Maithili and Bhojpuri elites of the Tarai between Bagmati and Kosi, they alienated Nepal's majority with multiple relations all over India. In the west Kumaon and Gadhwal to the east in Darjeeling, Sikkim and Assam, as well as in the rest of India from temple priests to businesses to security establishments, Nepalis have rich and close relations in India which suffered grievously.That Modi misadventure also provided the Chinese a diplomatic and psychological lottery windfall for no significant investment at all!

To break the impasse and begin repairing the damage, Modi fell back on his spooks (who ruined relations in the first place with their ill-advised blockade) and sent the RAW chief on a semi-clandestine mission to meet PM Oli and other political figures. That choice was made mainly it seems because it is not Indian diplomats or political figures the current Nepali leadership listen to: the top honchos are beholden to the Indian intelligence agencies that nurtured and elevated them. It was followed by a ceremonial visit by the Indian army chief to receive the mutual confirming of honorary generalship. What must not be forgotten is that during the critical days of the 2005 November adventurism by the Sonia-led Indian establishment, the Indian army stood against the spooks and South Block proposed regime change in Nepal but lost that battle. Also, it was the pressure of the Indian Army that forced Modi and the spooks faction to lift the 2015 blockade of Nepal.

The subsequent visit by the Indian foreign secretary, leaving aside the procedural and ritual aspects, was significant for one major diplomatic message: his eulogizing King Prithvi Narayan Shah in Gorkha.The 2005 alliance of European proselytizers, Mughlani adventurism and history-distorting Nepali Left opportunism was to undermine the very foundations of Nepali nationhood and portray 240 years of Shah dynasty rule as the darkest period in Nepali history. The new shifting mood, at least in Delhi's corridors of power, seems to be a belated recognition of the need to base relations with Nepal on common cultural and historical foundations, and not on denying and displacing them with liberal Western political philosophy-inspired vision of a future under threat in its own Trumpian and Brexited homelands.

For such a change in mindset, it is imperative to recognize that Nepal's founding King had a seminal role in preserving core cultural elements of South Asia. As the inspirational icon of Nepal Army, which is the oldest surviving Nepali state feature since the side-lining of the monarchy, it must be remembered that it was Prithvi Narayan Shah who succeeded in creating and preserving an independent "Asli Hindustan" in Nepal when Shivaji, Rani of Jhansi, and Ranjit Singh (to say nothing of the Mughlani remnants of Bengali Sultans and Punjabi Nawabs) failed and succumbed to British onslaught.

The Chinese too seem to have similar after thoughts as indicated by the symbolic diplomatic message of the 8-hour Nepal visit of the Chinese defense minister and state councilor. Ostensibly as part of the 65th Anniversary to celebrate the establishment of diplomatic relations between the two countries, Gen Wei Fenghe spent the substantive bulk of his time at the Nepal Army headquarters, while meeting the prime minister and president only as a short formality on the way to the airport. There is little doubt that the Chinese, despite attempts to forge party-to-party ties with Nepal's ruling communists, are deeply disappointed with Nepal's feckless kleptocrats, and are struggling to find reliable partners in Nepal that are firm Nepali nationalists but value Chinese friendship.

In light of all these shifts, what is one to make of the changing Nepali mindset about the failed Loktantrick dispensation, and what would have to replace it? A decade and a half ago, because of the apartheid practiced by the Loktantricksters towards traditional forces including religious ones, none would have dared come out to protest in the streets. Today, they are supported in droves by youth born after the Panchayat system was done away with, by common small-time business folks groaning under a nepotistic kleptocracy and even ordinary members of Kangress and UML deeply disappointed with their own leaders. A major rupture and breakdown of order is possible where the Nepal Army would have to step in.

However, if a sense of self-preservation prevailed upon the Loktantricksters, a less radical way out would be to go back to the 1990 constitution and start the reform processes from where the wrong turn into the blind alley was made. Such a reform could include even participatory referendum on critical issues of secularism, republicanism and federalism that they fraudulently denied the people between 2006 and 2008. Reforms would have to include preventing legislative representative MPs from becoming executive ministers, a major flaw in the imported Westminster model of democracy where the required separation of powers is violated. And why not? The parties themselves have argued for "one person, one post": why should a member of the legislature be derelict in the duty of oversight on the executive and become simultaneously an expertise-bereft minister?

Other reforms would have to be the need to get at least 50% of the votes in an election, going for run-off among the top two contenders if necessary. These and other such measures will all have to be initiated to improve upon the 1990 constitution. But for that, first this 2015 unworkable dispensation together with the failed leaders of the last three decades must be consigned to the junkyard, peacefully or thrown out by more robust public disgust.