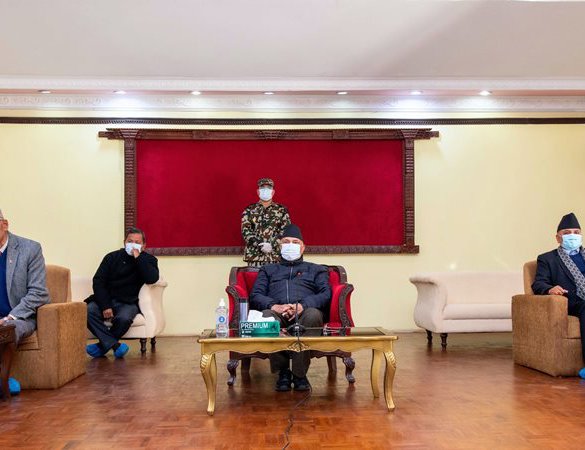 This Loktantrick (dis)order did not even wait for the Monarchists to bring it down: its own Bhashmasurs – the demon that received a boon from Shiva but used it to destroy himself – were themselves more than capable of the task. The fratricidal war within the ruling Marxist-Leninist-Maoistdouble-headed party finally resulted in its split on Tuesday. Despite enjoying a practically two-thirds majority in parliament, despite a comatose opposition Kangress, and despite a constitution cobbled by themselves in their favour barely five years ago, the Bolsheviks and the Mensheviks tore apart the two parties, erstwhile UML and Cash Maoists, allegedly united to sweep the elections three years back. In the process, they have exposed the unworkable hollowness of this political order.

Culturally, Nepalis, especially the country's politicians have always been fascinated by astrological predictions, often making them self-fulfilling prophesies. The solar eclipse of 26th December 2019 that repeated a year later on 14 December 2020, Saturn and Jupiter going retrograde and finally powerfully conjunct this winter solstice have added to mass worries compounded by the Covid pandemic. Nepali astrologers have said these unique planetary configurations herald epochal changes. Indeed, the last time this occurred was in the 13th Century which saw Genghis Khan's victory, the sputtering of the Crusades to a finish, the Russians defeating the Swedes and the signing of the Magna Carta. A less powerful but similar configuration in the 17th Century saw the English Civil War, Cardinal Richelieu centralizing French power, the rise of the Qing Dynasty in China and the Great Plague of Seville that wiped out a quarter of the population.

Nepal's Bickram calendar year ending in '7' has also fascinated Nepalis as a significant numerology indicator. Bickram 2007 (1951 AD) saw the end of Rana rule; 2017 saw King Mahendra disbanding the parliament and introducing the Panchayat system; a year after 2027, King Mahendra passed away; 2037 saw the National Referendum heralding the decline of the Panchayat; 2047 saw its actual end; a year past 2057 saw the Royal Massacre; and 2067 saw the First Constituent Assembly, elected with such hope and fanfare, fizzle out. That led to unholy compromises and eventually a new but dysfunctional constitution. The public mind is fearful of what 2077 will herald, more so with bad planetary configurations.

What Oli seems to have unwittingly done is to tear apart the veil of deceptions since 2005 that kept this dispensation lingering along, and confirmed the worst numerological fears of all for 2077. His address to the nation explained why he had to opt for the dissolution of parliament and why the people themselves have to be the final judge through elections. Essentially, senior oligarchs of his own party were bent on exercising power without responsibility, extracting financial benefits for friends and family (but letting the blame rest on the PM), and not really letting the government move forward with plans and programs.

Under this Westminster parliamentary model, this kind of malfeasance seems to be the norm in Nepal. Girija Koirala had to revolt against both the street politics of the main opposition UML as well as Kangress party Ganesh Man faction's milking of contract awards that forced him to dissolve the parliament in 1994. KP Bhattarai succumbed to Girija Koirala's similar machinations in 2000, and Sher Bahadur Deuba too had to dissolve the parliament because of Koirala's conspiracies in 2002. What is worse this time around with Oli is that an independent referee in the form of a monarch above competitive party politics is absent; and the office of the president has been misused as a rubber stamp by the Oli faction of the ruling party.

The country now awaits the supreme court to give its verdict, but there is an inherent problem in trying to find a legal solution to political problems. If the dissolved parliament is resurrected, it may provide a fig-leaf for the victorious side to hide behind, but it won't erase either the underlying unbridgeable political acrimony nor the structural flaws in the constitution that encourages this kind of irresponsible party culture. The court doing so in the mid-1990s, denying the PM the one instrument he has to keep the members under discipline in a Westminster model, led to the corruption and loss of the image of multiparty democracy that contributed, in no small measure, to the rise of Maoist insurgency. Assume this "parliament of whipped sheep" is restored: will it function politically, especially when Kangress will have lost its position as leading opposition to one of the fratricidal communist factions? And for how long, that too before impending local and general elections?This fratricidal warfare has also seeped down to the provinces where serious bloodletting is in the offing.

More serious are the noises emanating from our southern neighbours that is contributing to vitiating an already poisoned atmosphere rife with suspicions and distrust. An ex-Mughlani "viceroy" of 2005 regime change has written an op-ed piece in the Economic Times that can be read in interesting ways between the lines: India's flurry of high-level recent visits was to counter Chinese influence within the ruling party and its attempt to keep it intact for stability and to woo Oli away, he admits. As a result, one could read it and see India's hand in destabilizing Nepali politics to counter the Chinese.The bottom-line message that Nepalis might be hearing is that China is interested in Nepal's stability and builds it relations with institutions, while India invests in individual politicians while destabilizing institutions, including the 2005 dispensation it midwifed.

In the recent visits of spooks, generals and apparatchiks from the south, there was one message that Nepalis are still trying to figure out if it is for real: the emphasis on traditional ties between two countries. While welcome, it would be a hard sell, primarily because India itself destroyed the pillars of those traditional ties, viz., monarchy and Hindu kingdom. To make matters worse, it ignored Nepal's multi-faceted relations with India that ranges from family ones across 124 ethnic groups of the country ranging from Kumaon and Gadhwal in the west to Assam, Darjeeling and Sikkim in the east, to say nothing of elite links with almost all the royal houses, Nepali priests in all major temples, and academic as well as business partners across India.

India excluded those rich ties from consideration, and emphasized only the family links of a few Nepal Tarai families between Bagmati and Kosi with Bihar, to the extent of imposing an economic blockade on the rest of Nepal and that too in the aftermath of the devastating 2015 earthquake. That damage, which also provided the Chinese a diplomatic lottery win for no investments, would normally take generations to repair. And the efforts from Delhi of the last few weeks were a good start. However, if India's spook-led (and not spook-fed) neighbourhood policy is back in its old games of micro-management and regime change, of investing in easily purchasable political clients rather than acquiring long-term friends, then Nepal can expect more instability in the days ahead, and a repeat of crass opportunistic politics of the late 1990s and post-2005!

Repairing Nepal's governance through political reforms is a difficult enough process without the meddling of neighbours. A parasitic federal system has been imposed on the country that soaks up all the taxed revenue to feed political cadres with little to show for development. Insulting the majority by erasing their cultural identity to benefit Abrahamic proselytizers is inviting a dangerous backlash that cannot be controlled by morally corrupt party politicians, as the recent pro-monarchy street demonstrations have shown. Imposing a neo-feudal party-hegemonic rule on the country without commensurate party discipline, inner-party democracy or accountability across major political parties is leading to the alienation of the citizens from the state, a state of affairs that promises more, and not less, anarchy in the days ahead.

The country is ripe for a rethinking – and remaking – of democracy and governance led, not by the failed leaders and their foreign handlers, but by the youth whose future is at stake!