Donald Trump may be on his way out — but there will be no easy way back to political norms. It remains to be seen how the US will develop, writes Ines Pohl. 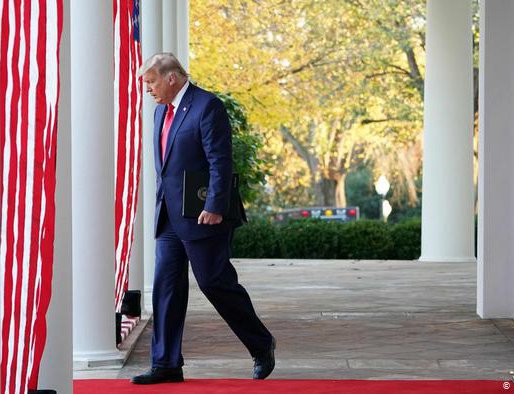 The walls of the US system of checks and balances have withstood Donald Trump's attacks. He is leaving the White House on January 20, 2021 — and not even the Supreme Court justices he appointed can change that.

This transition of power comes as a relief. President-elect Joe Biden is a far more reliable leader who honors established forms of conduct and knows just how fragile democratic institutions can be.

But it's only this much we can predict; beyond that, little is certain. All those assuming Trumpism will vanish on January 20 are making a cardinal mistake. If you think Donald Trump's rise was some sort of coincidence, misfortune, or exception — you are mistaken.

Trump was no coincidence

Donald Trump's corrupt, nationalist and racist policies are no accident. It was borne out of the two-party political system in the US, which is in dire need of reform. This should serve as a wakeup call for anyone who believes democracies can be kept afloat by clinging to outdated structures and privileges. The opposite is true.

Trump, like all successful populists, appealed to voters by pitting "us" against "them." His campaign promise to put "America first" was an implicitly racist pledge to push back any supposedly foreign, or "un-American" influences. While this may seem like a bizarre promise made in an immigrant country like the United States, it did appeal to those hoping to keep a white Americans in power.

After all, as US demographics continue to change over the years, some white Americans will increasingly feel they are losing influence.

Trump's other narrative, cultivated early on, was that he is sticking up for the oppressed and disadvantaged — and taking on the elites in Washington. Joe Biden, who has served in US politics for 50 years, is the very emobodiment of such an elite. That's why he will have little chance of breaking up this friend-foe dichotomy.

This leads us to Trump's third and final instrument — his most powerful and dangerous, no doubt. This is his continuous questioning of reality and facts, framing them as politicized, rather than objectively true. Trump refuses to accept that scientific findings are based on research. How, then, are we to reach people who have drifted off into their own world of lies and conspiracy theories? How is America, as a society — and one that has lost touch with reality — supposed to come together again?

Joe Biden and his Cabinet face tremendous domestic challenges. If the Democrats fail to win Georgia's Senate election on January 5, Joe Biden's presidency is doomed to fail even before he is inaugurated on January 20. This is because Republicans will use their control of the Senate to boycott Biden's policy-making efforts.

If this comes about, we will see a Biden administration working hard to re-establish a sense of stability. Yet Biden's administration will govern a polarized country, struggling with severe economic problems that further deepen these divisions.

We will see the US consumed by domestic power struggles for years, even decades, gradually abandoning multilateral politics, especially in Europe. This trend will continue regardless of which party controls the White House. And this is a stark reality that Europe and Germany must acknowledge.