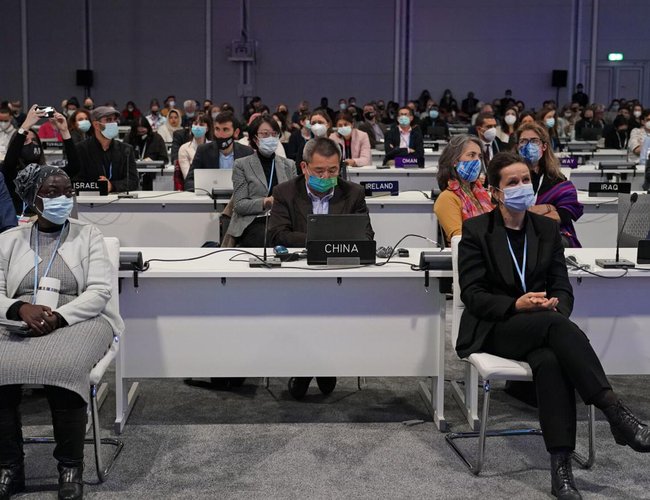 A new draft document has been published by the president of the COP26 UN climate conference as participants continue late-minute negotiations.

The second draft was released early on Friday, the day the conference in Glasgow, Britain, is due to end.

The document reaffirmed the need for accelerated efforts over the next decade to hold the increase in the global average temperature to 1.5 degrees Celsius above pre-industrial levels.

Participants have pledged their greenhouse gas emission reduction targets by 2030. But the new draft says ''accelerated action'' is needed based on the best available scientific knowledge.

Developed countries have promised to provide developing nations with 100 billion dollars per year to help them cope with climate change. The draft urges advanced economies to fully deliver on the goal ''urgently and through to 2025''.

The first draft called for speeding up the phasing out of coal. The latest version says the parties need to accelerate the adoption of policies for the transition towards low-emission energy systems.

The phrase is said to include the phased abolition of coal-fired thermal power plants that lack measures to reduce emissions.

Attention is on whether the participating countries can agree on the draft in their last-minute talks.

COP27 Agree On New “Loss and Damage” Fund For Vulnerable Countries By Agencies 1 week, 2 days ago

COP27 Extended For A Day By Agencies 1 week, 4 days ago

Developed And Developing Nations At Difficult Negotiations Over Emission Reduction Efforts By Agencies 2 weeks, 3 days ago

Nepal Government Is Preparing To Declare 'Climate Emergency' By Agencies 2 months, 1 week ago