MCC Agreement Is In Nepal’s Interest, Don’t Run Behind Rumor And Fake News 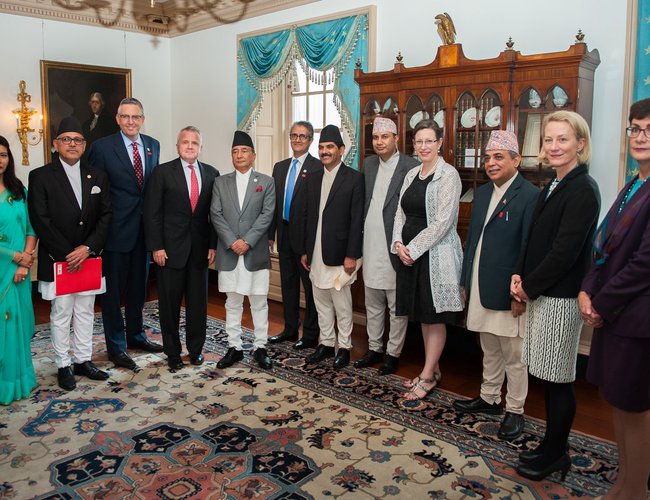 I would like to start from here. In September 2017, the U.S. Government’s Millennium Challenge Corporation (MCC) signed a $500 million compact with the Government of Nepal. The compact aims to maintain road quality, increase the availability and reliability of electricity transmission, and facilitate cross-border electricity trade between Nepal and India—helping to spur investments, accelerate economic growth, and reduce poverty.

As a Nepali citizen, I have been closely and enthusiastically watching the issue of receiving the MCC grant from the USA. First of all, the MCC is an agreement under which the United States of America provides grant assistance in the amount of US$ 500 million to Nepal. This is a complete grant given to Nepalese people. Unlike loan agreements that the Government of Nepal had signed with other bilateral agencies, there are few terms and conditions that are incorporated in this agreement. We need to refund neither the grant amount received nor interest on it. Under the MCC, the government of the United States has been providing a grant to the least developed and developing countries around the world to build infrastructure projects like road and electricity. By providing grants in this sector, the MCC aims to support the poverty alleviation programs of countries like Nepal many of which have been implementing MCC.

Nepal government had submitted a proposal in 2008 to the US government claiming to qualify for the MCC grant. After evaluating Nepal’s claim, the US government agreed to provide $ 500 million in grants for improving electric transmission lines and for enhancing road sector connectivity around the country. This grant under the MCC agreement was granted to Nepal at the sole request of Nepal and it is not a decision imposed by the US.

MCC will support the expansion of 400 kV high-voltage transmission lines and road networks in Nepal. The transmission line proposed by the MCC will help to increase the internal consumption and export of electricity to the third country. Had Nepal ratified the MCC and started the construction on time, the project would have completed now and would help us to export to India the excess electricity that we would produce domestically. However, the succeeding governments in the past did not take the serious initiative to receive these grants and ratify from the parliament, rather they seemed to be giving more space to confusion and contradictions. Looking at present debate, the government has failed to disseminate the right and correct information to the people regarding the benefits Nepal may be able to receive from this grant.

A section of individuals and political parties have been knowingly and unknowingly disseminating distorted facts and opinions against the MCC’s $ 500 million grant stating that the treaty has provision for military component and the terms that degrade the national sovereignty and constitution of Nepal. It is unfortunate that even highly academic individuals have been disseminating misguided information about the MCC. However, there is no such provision or statement, or reference in the treaty. The treaty is transparent and open to read. As a lawyer, I have not found any clauses which have anything to do with current rumors and discourse. All false and wrong information is disseminated to the people. The agreement is open to all. However, false and distortion of terms and conditions of the treaty are currently being spread in the market.

As a student of international and commercial law, there is no such provision in the treaty which limits Nepal’s sovereignty or force Nepal to join military alliance, or any such issue. In fact, if we read the whole agreement, we find that status of the USA giving grants and the status of Nepal receiving the grant is equal. The provision of the treaty fully and irrevocably recognized the sovereignty, integrity and independence of Nepal.

As this is an international agreement signed between the two sovereign nations on an equal footing, the agreement follows certain universal norms and criteria When two countries, be they Nepal-US, Africa-China or Russia-India, agree on such agreements, there is the need to incorporate certain universal clauses as per international standards. For instance, there are certain provisions including giving tax rebates, guarantees for security, law-related matters for foreign experts coming to work for the project. Whether you sign an agreement with bilateral agencies or multi-lateral agencies, all the agreements consist of certain similar clauses. That does not mean that the concerned parties want to violate Nepal’s law. The lender wants legal protection regarding the project and its implementation as per the terms.

Nepal has signed many hydropower development-related and other infrastructure development agreements with China, India and other companies in Nepal, in which we agreed to accept the laws of Singapore, Switzerland and Britain to settle the dispute on arbitration. In every agreement, we write that the issues of arbitration deal under the law of foreign countries, not Nepal. If you want a foreign grant or loan for development, you need to accept certain terms and conditions. For their investment guarantee, we have to accept conditions for the dispute resolution mechanism. If we do not abide by this, no investor could come to Nepal for investment. When someone is investing a huge amount of money, the receiving countries need to provide security and confidence to granting countries for their protection and proper use of their grant and investment. To every country whether China, India, or the US, Nepal must give this kind of guarantee to facilitate investment. This is a well-accepted international practice and tradition. For the layman, it looks somehow strange. Thus, the MCC agreement is based on international spirit and practice. What is circulated in media is, in some way, distorted and false.

If you read the agreement literally, there are no such provisions or clauses to limit Nepal’s law and sovereignty by implementing American laws. You may like this or I may not like this, what I am saying is the written document where the words are in black and white. What I am trying is to show people what is written in the document. If people decide to reject the agreement after reading it, I accept their verdict. But, people should not be put on the dark side.

According to the MCC agreement, Nepal can use the grant only in two areas. One is road/highway up-gradation and another one is Electricity Transmission line expansion. The agreement also talks about the transfer of technology in the road sector. Due to lack of adequate transmission line, Nepal is currently unable to evacuate the electricity from one place to another and is unable to export excess electricity power to neighboring country India. At a time when Nepal does not have adequate resources to build such infrastructure, Nepal has been relying on multilateral donors for a loan as Nepal needs to pay interest and refund such loan amount in due time. This is for the first time Nepal is close to receiving US$ 500 million or Rs.60 billion grants for such large infrastructure projects. This is the first time in the history of Nepal that such a huge grant amount is being received for infrastructure development.

In this situation when the US government agrees to provide the grant to Nepal as such grant amount is being collected from its taxpayers in the US, it is natural for the country to secure a guarantee from the recipient country that the money would be used properly, in a timely manner, in the sector that is stipulated in the agreement.

As per the agreement, the USA wants assurance from Nepal that the money should not be used against the environment, for military or paramilitary purposes and for abortion. They want to audit reports from the government to see whether the money given as a grant is being used properly and according to the terms of the agreement or not. They will accept our audit report but want it verified.

I am also against any agreements which devalue and undermine Nepal’s sovereignty, integrity and respect. If MPs see this is against national interest, they have every right to say no and ask the government to terminate the agreement. This is a great opportunity for the House of Representatives to evaluate and analyze whether the money coming as a grant to Nepal benefits Nepalese or not.

The current discourse and discussion on the agreement is going on the basis of personal whim, individual interest, party interest and other hidden interests. I have seen most of the discourse or media discussion by reading the black and white letter and spirit of the agreement. The current debates on the MCC are based only on individual interpretation, personal likes, or dislikes, not on the basis of the technical part of the agreement. Politically, one has its own interest but one has to see this agreement technically. If parliament ratifies the agreement, Nepal will receive a substantial amount for development in its national budget as a grant.

Nepal needs development and it requires a huge budget for its developmental work. Rejecting the MCC agreement will bring a major financial set-back for Nepal. Given the current revenue scenario, Nepal’s revenue is not even enough to fulfill concurrent expenditure. Rejecting the fund without knowing will be a disaster.

First of all, we all need to convince the people that there are no such negative clauses and provisions that are against Nepal’s interest. We need to clarify the false information or disinformation that is being disseminated to the people in the media and public. Government, political parties and civil society have to take an initiative as to what is there in the MCC agreement and what real benefits Nepal gets after its implementation. This is a very crucial time now as MCC Board is reportedly taking a final decision on it. Before any decision by the MCC board, Nepal’s parliament must table it and ratify the agreement to send it for implementation. If we are unable to take timely decisions, Nepal will lose over Rs. 60 billion grant money and it will be a great setback for Nepal. Time is running out. Although it is situated between China and Russia, both hostile parties of the US, Mongolia has been able to use the MCC grant for the benefit of the people of Mongolia. Nepal also needs to learn the same lesson from Mongolia.

(The opinions expressed in this article are those of the author. They do not purport to reflect the opinions or views of New Spotlight.)

China’s Rapid Transformation And Lessons To Learn By Krishna Silwal 2 days, 11 hours ago

Youths In Nepal Elections: From Social Media To National Platform By Sangya Dhakal 4 days, 10 hours ago

Skeleton In The Sandook By Hemant Arjyal 5 days, 8 hours ago

An Overture Filled with Confusion By Dr. K. Uprety 6 days, 15 hours ago