Nepal’s Mal-Development: Where And How Did We Go Wrong?

A comprehensive summary of the ills bedeviling industrialists and local entrepreneurs was presented by the Chamber’s president Suyesh Pyakurel, the gist of which lay in the wide gap between the government’s stated policy commitments and their dismal implementation at best and outright reverse practice at worst. 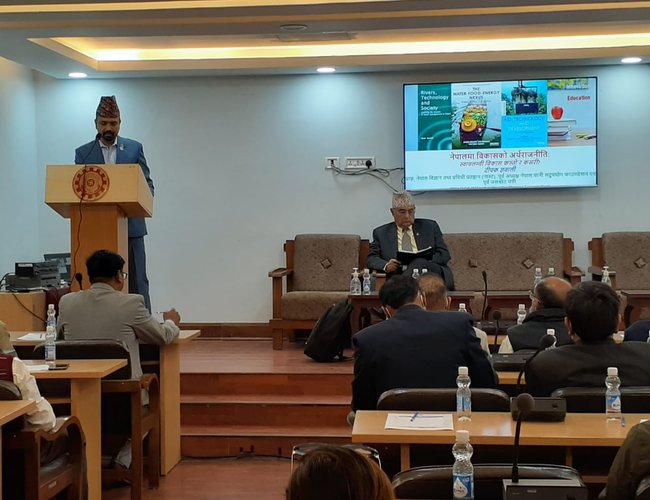 In mid-February, Morang Chamber of Industries in partnership with Purvanchal University and Golchha Industry Studies Center invited me to Biratnagar to speak about the political economy of development in Nepal and the conundrum faced by its industries. It was part of their larger effort to professionally examine the problems besetting Nepal’s industries via their own research as well as through dialogue with experts and officials across the scale, and to suggest remedies. What was telling and inspiring was the sheer energy and creative thrust behind their effort to examine the wicked problems facing Nepal’s industries, to find uncomfortable knowledge why this is so and to propose workable clumsy solutions, something that is near-absent in their counterparts in Kathmandu. It proves the old adage that interesting things happen in the margins, not the center!

A comprehensive summary of the ills bedeviling industrialists and local entrepreneurs was presented by the Chamber’s president Suyesh Pyakurel, the gist of which lay in the wide gap between the government’s stated policy commitments and their dismal implementation at best and outright reverse practice at worst. Citing the World Bank’s 2021 Nepal Development Update, it was pointed out that Nepal has a “missing” export potential some twelve times its current actual export, something if achieved could create over two million new jobs. During the Panchayat years, we were rice exporters: today we import some 60 million rupees of vegetables per day to say nothing of over 20 billion rupees of rice per year (a figure which is about half the net US MCC grant in five years, it must be noted)! In value terms, we import ten times more than we export, with India occupying 64% of the share and China 14%. Even in electricity which we were self-sufficient in with renewable hydro just some two decades ago, we now import over 40% fossil-fuel produced electricity to meet our needs.

The Chamber’s report highlights the dismal state of our industrial ecosystem. Taking examples of several established industries such as animal feed, liquors, textiles and jute, it highlights how raw material imports account for anywhere from 70 to 95% of the total. There is no official encouragement, either to industries or to local producers of raw material, to go for import substitution. On the contrary, local industriousness is highly taxed: an example given was how a four million rupees sales bill has an added five million excise duty and one million VAT, resulting in six million for state coffers, mostly misused for party cadre upkeep!

A ketchup industry in Itahari finds it cheaper to import tomatoes from Andhra Pradesh than to buy them from local Nepali producers because Nepal’s National Planning Commission and its Finance Ministry value only revenue extraction at customs point with no need to consider forward and backward linkages in our production chain. Such contradictions also arise because importers can use legal loopholes in India for subsidies in dollar payments while Nepal’s misguided foreign currency and import policies promote such malpractices.

The question is: what underlying political economy takes our economy to hell in a handbasket, so to speak? The vexing example of Mirganj bridge enroute from Forbesganj in Bihar that is five kilometers south of Jogbani was cited as typical of how Nepal pays wholly unnecessary high costs for industrial cargo due to official indifference. The dilapidated bridge’s structure broke down in early January 2022 (it had suffered similar malfunction five years earlier), resulting in cargo destined for Biratnagar needing to be re-routed via Bhantabari adding 116 kms extra detour and an additional 20 thousand rupees cost per truck. Moreover, the failure to arrange customs clearance facilities in Bhantabari itself means the trucks have to be escorted by armed police and customs officials for extra 40 kms to the ICP check post in Biratnagar, a procedure that is carried out only once a day. Requests to Nepal officials to find alternative solutions by Morang industrialists have fallen on deaf ears, and economic diplomacy between Nepal and India has remained a dialogue between the deaf and the mute!

Why is this so? The rot, exacerbated by current crop of party leaders, goes back to the Third Panchayat of the 1980s (there were three Panchayats: Mahendra’s first ten years of the 1960s, Birendra’s next ten till the 1980 Referendum and essentially Aishwarya’s third till the restoration of multiparty democracy in 1990). The process of Nepal’s industrialization initiated by Juddha Sumshere just before the start of Second World War received a boost from King Mahendra in the 1960s and was continued by King Birendra in the 1980s, his last effort being the establishment of a paper factory with Chinese help. It was in the mid-1980s that two trends collided: Aishwarya Panchayat that institutionalized not industriousness and service delivery but rent-seeking among officials on the Nepali side, and the fatigue that set in among Western development agencies on the outside who initiated what is called “structural adjustment policies”. It was essentially geared towards opening up national economies of the Global South to Western capital and goods in the name of market liberalization, but really propagating a neo-colonial agenda; and it has rightly been called “fatalism in development”.

With the advent of party rule in the early 1990s, mostly under pressure from Western donors to divest the state away from development and to leave that to the market, but also due to a revenge attitude of hitherto banned parties towards Panchayat built industries, the Nepali Kangress government sold off state-owned industries for a song. Then began the process of not import substitution but a massive shift towards promoting imports. While there was praiseworthy progress in fostering private airlines, schools, hospitals and private hydropower development, decline set in with critical sectors such as agriculture and import-substituting national industries.

While it is true that where no market or appropriate industries exist, it is the state that has to create that space either by directly setting up state enterprises or providing an enabling environment to attract risk-taking punters. However, once a government has gotten an industry up and running well, it would be wise to divest it to private operators, mainly but not only because bureaucratically run outfits are rarely able to operate efficiently. Compared to state-run enterprises, private sector increases productivity through both increasing efficiency and exploring new market opportunities not visible to closed and risk-averse bureaucracies.

Nepal presents contrasting cases of doing privatization badly versus doing it right. The state enterprises sold off in the 1990s, let alone increase productivity, have stopped producing anything at all. The Bansbari Shoe Factory or Bhrikuti Paper Mill used to provide meaningful employment to thousands upstream and downstream of the factory chain. Now importers of those items provide employment only to a few office staff and accountants! On the other hand, Butwal Power Company (set up by Norwegian missionaries but nationalized by the Panchayat in the late 1970s) was privatized by the Chand cabinet in 2003 where I was the water resources minister and Dr Badri Shrestha was the finance minister. BPC has more than doubled its capacity, is expanding into new power plants and has established itself as a leading Nepali private hydro developer.

As scholars of political economy such as Karl Polanyi have noted, it is only a strong state with stable government that has been successful in creating market conditions beneficial to the state, whether in England from the 16th century on or in China in the late 20th. Lacking that, states have become lackeys to market players as examples from East India Company in India to current Nepal and many other countries of the Global South provide testimony to where it was not markets serving society but society put on the auction block to serve the “satanic mill” of the market.

A sad testimony to that is how, with de-industrialization of Nepal, citizens of rural Nepal unable to find livelihood means withing the country were stripped of their social persona as well as social protection and thrown into the cauldron of the global labour market in the Middle-East, Malaysia and South Korea. As a result, Nepali import-substituting industries now cannot even find skilled or semi-skilled labour to man their industries. The vicious downward spiral gets worse as Nepal’s remittance dependent economy (with it accounting for some 30% of GDP) gets hit by what is called “Dutch Disease Impact”, a phenomenon where, when one sector of the economy becomes bigger than 10 or 12%, a chain of events takes over – from over-valued exchange rate that leads to more de-industrialization, shift from manufacturing to service industries, decreasing share of exports, trade deficits and so on.

The fault for this lies squarely at the door of democratic socialism professing Nepali Kangress and Marxism spouting UML: they have betrayed their founding political ideology of self-reliance and become vassals to crony capitalism of import trading houses. (The less said of the Maoists the better: there is not an iota of real Maoism in them!) With the Ukraine crisis, as the old world order heads to a decline, we are witnessing the birth of a new one with Bretton Woods-III where nationally produced commodities will be the real currency over printed dollars of Bretton Wood-II. Nepal awaits a younger and new political leadership that can see the promises and pitfalls therein to bring the country out of the current morass.