The results of the local election have been an eye-opener in the sense that a number of ‘Baggi’ candidates have won in a number of places to show that there is dissatisfaction in the electorate. 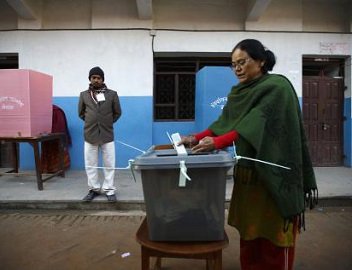 The recent local elections were extraordinary and an eye opener as to what we citizens of Nepal have been made to suffer. Parties which in the past were facing each other most of the time, bonded together in a very unusual manner to fight the local elections, true to the adage ‘There are no permanent friends or foes in politics’. It was literally ‘You scratch my back, I will scratch yours.’ Whilst coalition governments after elections, if there is no outright winner is an accepted practice, the doing in Nepal of sharing seats for elections prior to voting day is taking the electorate as non-entities and making fools of them! In local jingo it may be stated as ‘Mili, mili jaun, mili mili khaun’.

The results of the local election have been an eye-opener in the sense that a number of ‘Baggi’ candidates have won in a number of places to show that there is dissatisfaction in the electorate. True some ‘Baggis’ lost in some places when they were pitted against powerful candidates of the high and mighty. The point however is that, there is dissatisfaction in the air. Will our veteran politicians never learn when they should go and make place for new ones? In the developed countries it is the usual practice for incumbent premiers or even leaders of opposition parties to resign from the leadership if they have lost the election. All our leader who are above fifty know this, but pretend they do not. An example has been set by the leader of the Bibeksheel-Sajha Party who has resigned from the post taking blame for the party to be successful in the local elections! Surprisingly the spokesman for the Nepali Congress has stated that the same ‘Gathbandan’ will function at the National and Federal elections conjectured to be held possibly in the second half of November. If that is so why don’t they form a combined party and fight under a single flag and symbol. My only comment on this is to re-quote former President Abraham Lincoln of USA, who said:

“You can fool some of the people all the time,

All the people some of the time,

But you can’t fool all the people all the time.”

The point to remember is that we Nepalis are being ‘Taken for a ride’ by many politicians in our land. One hears that the so-called success if the Melamchi project, which has taken twenty years is not really able to supply water for more than seven months of the year. Why is this information being divulged now? Is this to inform us that bottled water by various drinking water suppliers are permanent fixtures in our lives?

As per a report in a Kathmandu English daily on 2nd June as many as 55 Bills which have been discussed at length in the various committees are waiting to be presented, discussed and endorsed by the house. In fact some have been waiting for this to be done since 2018. There are also six ordinances whose bills have to be endorsed too, making a total of 61. All this has been due to the disruption of business by the current parties in parliament when they were either ruling or in opposition. Some of the bills pending since March 2018 are said to be crucial for the running of the Pradesh Sarkars if they are to function properly. There are others which are essential covering pending issues such as on citizenship, gender issues, rape, legalising of ganja plus others on important matters. The current members are therefore all squarely responsible to see that these are tabled and acted upon.

The point now is that as per present reckoning the Federal and National elections will be held in late November or early December. It is estimated that it will take at least four months i.e. till September for the 61 bills to be endorsed by both the National Assembly or Upper House and the House of Representatives. What happens if these cannot be presented and passed? Currently the National Assembly has passed the resolution on Federalism whilst the Lower House has still to do so?

Is it reasonable for a new house with many new members to just rubber stamp what has been discussed by a previous house. It is likely they would like to know the details of what is therein in these Bills. Does this mean that what had been done by members of the previous house is going back on the selves? Has all the time, money and resources spent so far going down the drain and perhaps restart the process with a new set of representatives all over again?

Seventy years old in the parliament,

That’s why the country is ever having accidents.

When service holders retire at the age of 58 in government service or 63 years in academic circles and the receiving of old age pensions has been decreed at 68 years, why no limit for politician. Perhaps the President / Vice- President should be restricted to one term of five years each, PMs to a maximum of two terms in office and Ministers to three terms in office. Only if such a system is rigidly laid down then only will the younger generation have something to aspire for!

Another was: The capacity of Nepali leaders to withstand abuse is stronger than the strength of a rhinoceros hide!

It is high time for the political parties to mend their ways for otherwise they are in for a BIG surprise! The younger generation of Nepalis will certainly take matters into their hands in the coming days.

No Politics And Good Voters For (Local) Development By Prof. Dr. Prem Sharma 1 day, 9 hours ago