This Is A Year When We Celebrate Not Just 206 Years Of Partnership, But A Partnership Cemented By A Monarch

In Nepal, we should encourage the youth to think about their role in the UK Nepal partnership. I’m looking forward to meeting this year’s Chevening scholars, before they leave for their studies in the UK to start to forge those lasting links 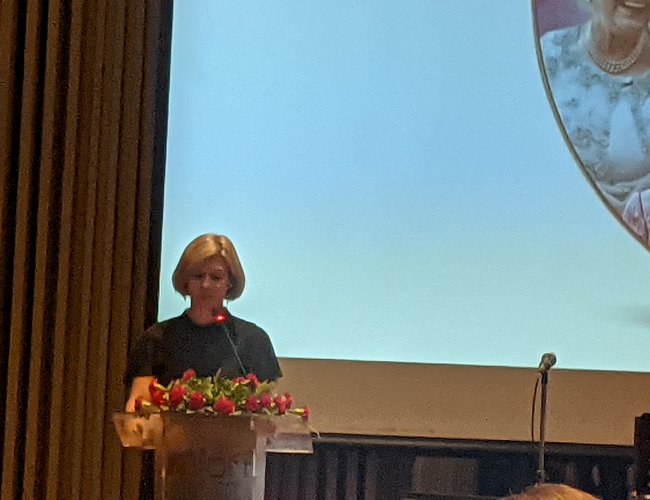 It is an honour to be the British Ambassador to Nepal in the Platinum Jubilee year and to be here celebrating with the Nepal Britain Society. And thank you to the President of the British Nepal Society for this evening and for many years dedicate service to the partnership between our two countries.

This is a year when we celebrate not just 206 years of partnership, but a partnership cemented by a monarch, who since her Majesty’s first visit in 1961 has shared with us a love of this country. The Queen has passed on that love of Nepal to her children and grandchildren. We are proud that the Prince of Wales has twice visited Nepal and explored widely, embracing the opportunities for trekking and enjoying the wonderfully diverse nature. Princess Anne visited in 2000, and went across the country visiting many of the charities and NGOs with British links, and of course Prince Harry’s 2016 visit is still fresh in many of your memories – I know the Nepal Britain Society played an important part in the 200 anniversary celebrations and the in the success of Prince Harry’s visit.

This evening is a particularly happy moment, because of the challenges we’ve all faced globally over the last 2 and a half years as a result of the covid pandemic. Coming together as we are tonight is not only difficult (I think this is our third attempt to work this date around covid), but it is also twice as exciting and rewarding when it happens.

It’s hard to recall just how many challenges, personal and professional all of us have faced over the course of the pandemic. I want just at this stage to remember for a moment the loss of our dear colleague Richard Morris, who was an inspiration to those he worked with and a great friend to so many of us here tonight. We will remember you.

In the UK and Nepal, the loss of family members, unprecedented restrictions, and prolonged separation from loved ones, have all taken their toll. Her Majesty Queen Elizabeth’s sense of where and when her moral support is needed is one of the threads which has run through her 70 years on the throne. On 5th April 2020 at the height of the first wave of the pandemic in the UK, Her Majesty made a video address to the nation. Her Majesty’s thanks to the NHS, her pride in the resilience of her people, and her personalise touch, which came through in that address, are all part of what has made her so successful and well-loved a monarch across the world. In July 2020 Her Majesty held an online meeting with staff from across the Foreign Office’s global network. She spoke to staff from Asia to Latin America and beyond, at a time when, as many of you will recall, we were under huge pressure running repatriations of stranded British Nationals from all over the world. Her Majesty’s sense of when and how to use her role to reach out and support is a theme that runs through the many reflections and memories we heard from leaders around the world over the platinum jubilee this year.

There is a recent BBC documentary called the Royal Diplomat. It looks at The Queen’s role over 70 years as a diplomat, and international influencer and a global role model. It’s a fascinating account of The Queen’s achievements on the international stage, delivered mostly behind the scenes and without ever stepping over the line into the political. Those of us who aspire to be excellent diplomats have a lot to learn. Her Majesty’s ability to use a little aside, an anecdote or personal recollection to shape and influence others, her ability recognise in the moment, the significance of that moment, her understanding of the historical context and the clarity of her memory of the places she has visited and people she has met, are talents that any top diplomat would be proud of.

Sadly, The Queen is no longer travelling the globe, but I know that if she were to come to Nepal for a third time, she would navigate deftly, the world which Nepal has moved into since she last visited.

Her Majesty would recognise and pick out, the foundations and characteristics of what makes Nepal and its partnership with the UK so strong - familiar even 36 years later:

- The warmth of the people

- And the outstanding contribution and sacrifice of the British Gurkhas

And she would skirt, with almost invisible diplomatic footwork, the political changes, from monarchy to Republic and cultural change, from hunting and elephant riding, to the protection we now avail to bio-diversity and endangered animals.

If her Majesty were to visit Nepal today, I would put forward a programme, which would see her visit the high mountain communities, and take her to the lowlands of the Terai. I would introduce her to the inspiring young women, whose rights, opportunities, ambitions and achievements outstrip what was open to girls in 1986.

The Queen would be struck by the improvements in primary education and healthcare, to which the UK is proud to have contributed. Her Majesty would enjoy hearing from many of you here tonight of the cultural and people to people ties we have continued to strengthen. And her visit, would as ever, be a quiet but powerful illustration of the value of democratic freedoms which we stand to strengthen and protect.

The Queen would also, I am sure, give priority to those issues, which now touch the top of the international agenda, but which in 1986, and far less in 1961 did not feature in her global diplomacy. Climate change is top of that list. It’s an issue which we know Her Majesty cares deeply about and a theme which ran through the Jubilee celebrations, including our own Queen’s Birthday Party. One of my favourite places in the Kathmandu Valley is the Botanical Gardens at Godavari, where the UK Nepal partnership is as strong as anywhere. Long-standing collaboration with the Royal Botanical Gardens in Edinburgh has supported some of the most diverse, beautiful and peaceful botanical gardens I have seen. The Queen herself has planted a tree there and this year we planted another close by in Her Majesty’s name, as part of the Jubillee Queen’s Green Canopy project.

So what is our partnership in this Jubilee year, and where should we take it from here.

As the British Embassy in Nepal, we describe our purpose as:

To deepen our strategic partnership with Nepal, delivering our shared prosperity and security interests, and a more democratic, inclusive and resilient Nepal.

We do that in a whole range of different ways, from our support to Nepal’s health system, to empowerment of women and girls in marginalised communities, and our partnerships with local and provincial governments to help embed the federal system. Our economic development work is designed to support job opportunities in Nepal and to help Nepal fulfil its economic potential. In 2021 our work with Nepal on climate change in the run up to Cop26 was one of the highlights of our collaboration. And we work side by side with the British Council, whose work in education and culture, and with youth, is a powerful element of our long-standing partnership with Nepal.

It’s my job to represent the British Government in Nepal. But part of my role is to foster and support the whole relationship between Britain and the UK. That means businesses, charities, and people to people. The Nepal Britain society is at the heart of those people to people connections. Your engagement in art, culture, literature, music between the citizens of the two countries continues to build and strengthen long-standing bonds.

Those people to people bonds will continue to be at the core of the partnership between our two nations. Now, as covid subsides, I hope, let’s challenge ourselves to look to the future.

In Nepal, we should encourage the youth to think about their role in the UK Nepal partnership. I’m looking forward to meeting this year’s Chevening scholars, before they leave for their studies in the UK to start to forge those lasting links. Ever increasing numbers of young people are educated in the UK, and many are returning to Nepal to play a part in the development of their country. Those ties with the UK are the next generation of our Nepal Britain partnership.

In the UK, young British Nepalis, often sons and daughters of Gurkha soldiers, are entering all walks of life, including local government. I don’t think it will be long before we see a British Nepali in the Houses of Parliament. Many of these people to people links are invisible to governments and bureaucracies. We need organisations like the Nepal Britain Society to nurture and grow them. So as we celebrate Her Majesty The Queen’s 70 years on the throne, let us work together to lay the foundations for the next 70, with people at their heart.

Nicola Pollitt is the ambassador of United Kingdom to Nepal. Excerpt of her statement delivered at Nepal Britain Society’s program hosted to celebrate Her Majesty’s Queen Elizabeth II’s Platinum Jubilee.

Nicola Pollitt is the ambassador of United Kingdom to Nepal

Nepal And The EU Share 20 Years History Of Partnership On Education By Jutta Urpilainen 8 hours, 29 minutes ago

Be Works By Hemang Dixit 9 hours, 30 minutes ago