The world is experiencing a reversal of generational gains in women’s rights while witnessing record numbers of violent conflicts. Armed conflicts in different parts of the world are adversely affecting women’s human rights as well as their families, communities and societies. 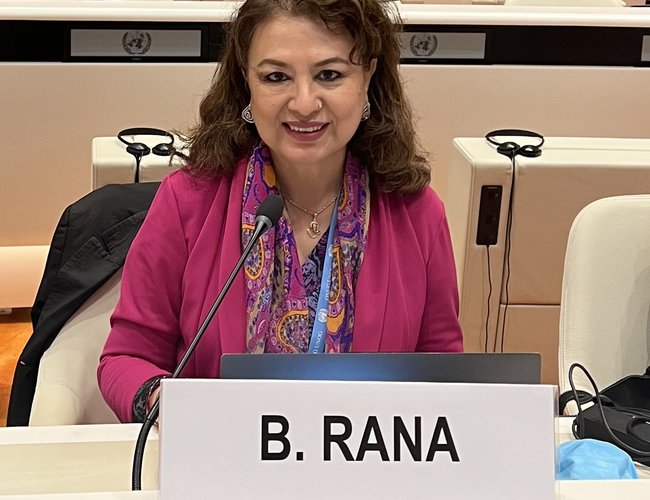 On the occasion of CEDAW Committee’s 40th anniversary I congratulate all the State Parties who have been supporting the work of the Committee and all members of the Committee. Coinciding with this occasion I have the pleasure of presenting some highlights of the Committee’s work on women peace and security. I take this opportunity to also thank the SPs for their continuous efforts in accelerating the Women Peace and Security agenda in line with Security Council resolution 1325 and subsequent resolutions on women, peace and security. To address WPS agenda more specifically within its mandate the Committee adopted the General Recommendation 30 in 2013 on “Women in Conflict Prevention, Conflict and Post-Conflict Situations.”

The primary aim and purpose of the general recommendation is to provide authoritative guidance to States parties to protect women’s human rights at all times, advancing substantive gender equality before, during and after conflict and ensuring that women’s diverse experiences are fully integrated into all peace building, peacemaking, and reconstruction processes. Since then a significant number of State parties reports, to the Committee, demonstrate a measurable impact, advanced through strong leadership, political advocacy coupled with increased gender expertise and accountability mechanisms.

However, the Committee remains deeply concerned about the current global conjuncture. The world is experiencing a reversal of generational gains in women’s rights while witnessing record numbers of violent conflicts. Armed conflicts in different parts of the world are adversely affecting women’s human rights as well as their families, communities and societies. Sexual violence in several extreme forms, continues to be utilized as a means of warfare, across the globe.

The Committee has repeatedly expressed concern about the gendered impacts of conflict and women’s exclusion from conflict prevention efforts, post-conflict transition and reconstruction processes. States parties have a due diligence obligation to prevent and protect women and girls in all their diversity from all forms of gender-based violence by State and non-State actors, including in armed conflict, and to prosecute perpetrators.

Presently,the Committee is closely monitoring two ongoing armed conflicts -in Afghanistan and Ukraine, through two separate dedicated Task Forces and its State reporting procedure. In November 2021, the Committee established the Task Force on Afghanistan and subsequently requested the Afghan Ministry of Foreign Affairs to submit an exceptional report on the situation of women and girls in the country since 15 August 2021, in accordance with article 18, paragraph 1 (b), of the Convention. This was the first interaction by a human rights treaty body with the Afghan de facto authorities. In April, the Special Rapporteur on violence against women and girls, its causes and consequences, Reem Alsalem and myself, undertook a joint technical visit to Kabul on the invitation by UNAMA. The Committee also continues to liaise with the de facto authorities and are awaiting the exceptional report on the situation of women and girls in Afghanistan.

On 12 September, at the 51st session of the Human Rights Council I had the honor to participate in the Enhanced Interactive Dialogue on the Situation of Human Rights of women and girls in Afghanistan.

The Human Rights Council at its 51st session equally issued a resolution on the Situation of human rights in Afghanistan. In the Resolution the Council requests the Special Rapporteur on Afghanistan and the Working Group on Discrimination Against Women and Girls to draft a report on the situation of women and girls in Afghanistan. It also calls upon treaty bodies to closely monitor and reflect on the situation of human rights in Afghanistan within the scope of their respective mandates. In this regard the Committee will be happy to engage or contribute in the drafting of the said report.

The CEDAW task force on Ukraine was established in February 2022 and seeks to monitor the situation of Ukrainian women and girls through engagement with national and international stakeholders as well as with other treaty bodies. The Committee recently on 18 and 19 October held a constructive dialogue with the Government of Ukraine on its ninth periodic report. The Constructive Dialogue clearly informed the dire situation of women and girls in the present conflict situation. CEDAW’s concluding observations we hope will guide Ukraine in addressing violations of women’s rights in conflict-affected and other areas of its territory. The CEDAW Committee is open to providing any technical support that may be required in the implementation of the COBs.

In conclusion we look forward to playing a key role as per the Committee’s mandate in countering the backlash against women’s rights and gender equality, addressing these barriers, and ensuring, that gender equality initiatives are prioritized and supported across all stages of peace processes, with women’s full, equal and meaningful participation. In doing so we keenly seek consistent, visible, and explicit political support from State Parties, to address immense suffering to women and girls caused by violent conflicts and take all possible measures to pave the path, to gender equality and inclusive and sustainable peace.

China’s Rapid Transformation And Lessons To Learn By Krishna Silwal 12 hours, 20 minutes ago