It is not much of a surprise to see consensus failing to forge even around the candidacy of Sushil Koirla from NC to head the election government, or agreement not easily reached even on the name of any other candidate from the fringe parties. 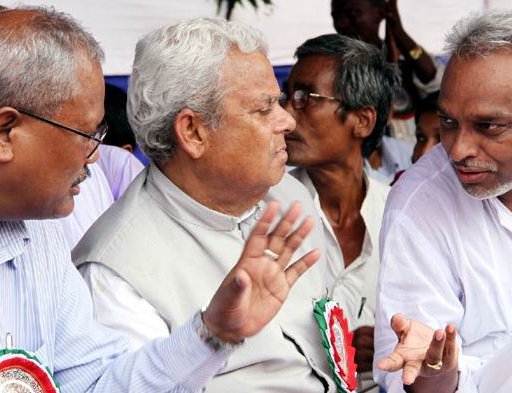 The current round of political impasse and deadlock in Nepali politics, which virtually heightened on May 27 of last year, along with the dissolution of the constituent assembly, is still persisting on. Major Political Parties do not seem seriously prepared for consensus and early election under a government comprised of major political parties as a National Unity Government.

The lust to remain in power on the part of UCP (Maoists) and its PM Baburam Bhattarai, even after he was relieved of his office, according to Article 38 (7) of the Interim constitution, which in no doubt is one of the major factor that is complicating this situation. To a certain extent, in the beginning it was natural on PM Bhattarai’s part to expect NC and UML of joining his government, like the one they had done weeks before the dissolution of the constituent assembly. However, it was absurd on the other hand to stick to power for an indefinite period of time, once he had been convinced that the parties in opposition would in no case do so in the changed context while legislative - parliament / constituent assembly was no more in existence.

That is why an observation on how even those who held him with high esteem, till recent past, seem to now be becoming his bitter critics day by day, points out what a great damage he has inflicted upon the peace process and on the nation as a whole by unceremoniously dissolving the constituent assembly; in addition to declining to step down after failure to hold elections for constituent assembly on November 22 as declared before. It indicates to an extent that the Bhattarai led government failed to rally the opposition parties around him and gain their trust, in which they could sit together in the same  government as co–partners of the pro-peoples' movement. In trying to do justice to the case, this very logic also applies to Nepali Congress in the sense that, after the passing away of Girija Prrasad Koirala, its leadership showed no serious interest in further extending hands of trust to Maoists and step into shoes of Koirala in terms of leading and   completing the remaining tasks of the peace process.

Against such background, it is not much of a surprise to see consensus failing to forge even around the candidacy of Sushil Koirla from NC to head the election government, or agreement not easily reached even on the name of any other candidate from the fringe parties. It reflects over all the extent of how power has been the priority of our political parties at this time, rather than preserving and institutionalizing the achievements of people's movement, in 2006, which should have been their bounden duty in terms of the change - agendas they jointly brought forward and the cause they fought for so far, during the movement and the tenure of the constituent assembly.

At the same time it is no less tragic to observe how even President Dr. Ram Baran Yadav's step in the right direction, although belated, on exploring consensus government for election was watered down by these very major political parties. The arrogance of Maoists in power remains worth taking into serious notice as substantiated by the fact that it didn’t  hesitate even to question the very legitimacy of president's public call for consensus government trying to justify   its  rational as  cabinet decision as reported .

This altogether calls for Nepalese to rise above the party line to see present Nepal's painful transition completed and a new era of stability, democracy and development unfolded soon. However, the fundamental question remains, how to reach to the point of election when political parties are least serious about it and setting silly conditions such as one party not accepting the government headed by the other. When will people get a sense of governance and a constitution when a transition and the deadlock like the present one continues showing no signs of a light at the tunnel?

In a situation like this, the key to break such impasse and deadlocks, in my opinion, rests solely in political parties' willingness to opt for mediation by some largely fair and relatively independent set of civil society leaders under the overall guidance of the President. Accepting that idea that our political parties are not willing or competent enough to forge consensus in forming a government to hold a constituent assembly election or even for mediation by civil society leaders under the initiative and guidance that should be provided by the President. In such a situation only a natural course of action to break the present impasse and deadlock shall finally be no other than peoples' spontaneous uprising, or friendly outside initiatives for mediation, irrespective of the fact whether our political parties may like it or not.

The nation cannot stay in limbo for an indefinite period of time, waiting for political parties to forge consensus and hold elections as is happening today even several months after the dissolution of the constituent assembly.  It is already high time for somebody to break the ongoing stalemate by boldly acting as interlocutor between or among the political parties. In this connection civil society leaders having long experiences and integrity will definitely be the best choice, provided the president feels moved to take initiative and switch to new tools of negotiation when earlier tools fail to give desired results, as the reality remains today. Supposing even such initiative does not work , in such a case, friendly outside mediation will be the only alternative, whether one may like it or not. Nobody will be able to stop this from happening, provided our internal political actors or mediators, official or non official fail to reach at consensus for holding elections at the earliest.

The Sociology Of Flood Management: Learning From Below By Dr. Dhruba Gautam and Pratistha Pyakurel 1 day, 19 hours ago

Here’s How Governments Can Reduce The Impacts Of Asia’s Devastating Flash Floods By Rabindra P. Osti 1 week, 1 day ago

Make In Nepal By Hemang Dixit 1 week, 2 days ago

The Inspiring Story Of Booker T. Washington: From Slave To Advisor To US Presidents By Purna B. Nepali, PhD. 2 weeks, 1 day ago

Communist Party of China centenary celebrations Reading between the lips By Abijit Sharma 2 weeks, 1 day ago