To sum up, it is really high time for our entire political parties to earnestlygrasp the gravity of the situation in the country at this time in the light of mounting unemployment among youths, their restlessness and frustration arising also out of 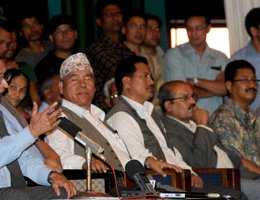 It is natural to see  UCPN Maoists' convention , held  last week  at Hetuada, drawing widest possible attention both  inside  and outside the country as one  organized obviously  after  an interval    of 21 years in an open  atmosphere and at a time when  Nepal is already a Republic.   It was  so also because, over the years, beginning from 1996, the party had engaged itself in waging a  war against the  state with the goal to attain people's democracy through   people's army and  other revolutionary means, in it's words, resulting apparently in huge loss of men and materials for over a decade .

It is where the key to, or  the main purpose behind,  the excessive  attention upon the present Maoist convention lies. In other words it is none other than the national, regional ,and global  concern as well, over the fact whether the UCPN( Maoists) ,or at the least this wing  of the party, has really, mentally and behaviorally as well, prepared itself to  adopt peaceful, democratic and constitutional means of political change and social and economic transformation of the country, not in rhetoric alone, as is believed so far, but convincingly in practice indeed in days to come after the convention.

That concern, to be earnest, appears becoming all the more relevant  this time looking  at how the Maoists have managed to stay in power,  leading the government as well, over the last eight months even after the dissolution of the constituent assembly and legislative-parliament, defying apparently  even the status of a already "relieved or care taker prime minister"  and the President's  justified role to derive a  consensus government genuinely  under  the Interim Constitution.

In the light of those facts and background , the UCPN Maoist convention, it is observed, has multiple  relevance, particularly so in the context of the current two developments. Namely, one, dissolution of the 601- member Constituent Assembly, where the party through elections had succeeded to secure   largest number of seats, and through which it was designing to obtain a Constitution largely based on its   revolution - time  agenda. Two, the party    has already faced the fate of split under the leadership of Mohan Vaidya ' Kiran' ,who seems bent upon  charging the mother party leadership for  surrendering the people's army and the arrms as well to the state  before succeeding to give a Constitution to the peoples on  revolutionary lines as promised during the war.

Against the background, it sounds logical when the convention is looked upon  highly as really a testing time  both for the future course of the  party and  appeal of the top  leadership, looking at it also both from the Mohan Vaidya led party's and Pro- Parliamentary parties' point of view. This is because Vaidya led party would naturally expect that the majority of convention members would effectively press upon the leadership to realize the blunders  made already in the past and  create environment   to come closer to it in terms   of consolidating   earlier  revolutionary goals , even if not under the same platform and banner for the time being for reason of its own.

In the same vein, it is natural on the part of the pro-parliamentary parties also to expect to see the convention convincingly capable enough   to adopt peaceful and constitutional means of social and economic transformation of the state,  by credibly  shunning the war -time hangovers, tendency to militancy and violence  and  lip service or strategic commitment to liberal democratic values , only  from the utilitarian  point view in the changed context.

In the light of  above historical facts and analysis, it is encouraging to see,  UCPN (Maoists') thrust, looking at what they have publicly said and  supplied to read so far in connection with the Convention, to begin with, towards realizing the significance of freedom and open society values for Nepal at this time. It is definite such preparedness on their part to mould to liberal faith and conduct alone would help them to increase their acceptance among pro-parliamentary parties in and outside the country as partners of election to Constituent Assembly and Constitution drafting process at the earliest while speaking in  the current national context.

On the other hand, it is equally a forgone conclusion   in case of  present day  Nepal that without  involving and assuring cooperation from the UCPN( Maoists) neither fair election, constitution making, nor end of present transition will be a  practical proposition in real sense of the term.. In other words, this drives home also the point how genuine understanding, based on universal principles of democratic governance among the  major political parties ,and basically between two major School of Thought in the country, namely, Nepali Congress and UCPN( Maoists) has been so eminent for the overall future of Nepal, provided we are really serious to rescue the nation , what is often called nowadays , from its present journey to a failing or a failed state, largely resulting from criminalization of politics surpassing any time in  the past.

To sum up, it is really high time for our entire political parties to earnestlygrasp the gravity of the situation in the country at this time  in the light of mounting unemployment among youths, their restlessness and frustration arising also out of degree  of unaccountability towards the people on the part of even senior political leaders. Nothing will be more dangerous, than underestimating the feelings of the suffering people at large and their right to revolt when state is found excessively negligent to look into their genuine concerns for indefinite period of time in the name of transition or absence of consensus among political parties.    Delay any longer on the part of  UCPN (Maoists) and pro-parliamentary parties for compatibility  will only lead to  confrontation among them at the cost of everybody in the nation as a whole.

The Sociology Of Flood Management: Learning From Below By Dr. Dhruba Gautam and Pratistha Pyakurel 1 day, 20 hours ago

Here’s How Governments Can Reduce The Impacts Of Asia’s Devastating Flash Floods By Rabindra P. Osti 1 week, 1 day ago

Make In Nepal By Hemang Dixit 1 week, 2 days ago

The Inspiring Story Of Booker T. Washington: From Slave To Advisor To US Presidents By Purna B. Nepali, PhD. 2 weeks, 1 day ago

Communist Party of China centenary celebrations Reading between the lips By Abijit Sharma 2 weeks, 1 day ago