Learning from the past, we have to deal with India without compromising our national interest and without running away from dialogue and negotiations. Lucky Mahat’s modest budget has opened door for substantial inflow of both bilateral and multilater

Annual budget with a total outlay of Rs 618 billion has been made public, which has a modest target of achieving 6 percent growth expending Rs. 166 billion as capital expenditure in the current fiscal year. .Likewise, 64 percent of the outlay is set aside to meet rocketing recurrent expenditure and 17 percent is allocated under financial management basically to meet debt obligations. Internal revenue, growing very satisfactorily in the last couple of years, is expected to provide major portion of the budget expenditure(441 billion) and greater reliance is placed on foreign grants(73 billion) than external loans(29 billion).Although finance minister Mahat wanted the budget to be made public a month earlier than the usual time to expedite capital expenditure, he should not be unhappy that he could read the budget on time unlike situation in the past when budgets were delayed unnecessarily due to obstructions created by political parties in the legislature parliament.

Few days earlier, Arun Jaitley, finance minister of India, also made the budget public there, which has provided lots of investment incentive to galvanize the 2- trillion dollar Indian economy currently growing at the slowest pace in a decade. Series of tax concessions are provided to manufacturing and infrastructure. Budget on the whole seems to be heading towards creating a suitable climate through provision of investment incentives. Ambitious task of increasing revenue by 17 percent and rationalization of subsidy will help, if achieved, reduce fiscal deficit to 4 percent and ultimately to 3 percent of gdp in the next three years. In our budget also, attempts have been made to create a climate of investment through provision of  incentives.Much needed correction has been done in agriculture through introduction of subsidy on fertilizer, interest rate and reduction of tariff on import of related equipment including means of transport. To be specific, budgetary allocations have been made to import and distribute at subsidized rate 255 thousand metric ton of fertilizer and farmers engaged in specified farming activities will have to pay only 6 percent interest on their loans.Indeed, Neplase agriculture is in a deplorable state, which is the result of wrong governmental policy of not assisting this sector and the conflict that led to mass exodus of youth from rural areas to urban pockets within the country and outside. Faced with high cost of production and scarcity of labour.people even in Terai are tempted to buy cheaper cereals from across the border in India where agriculture is subsidized. Once an exporter, Nepal now is a huge importer of rice and other agricultural products to feed its population of around 30 million. The budget has, therefore, made a humble beginning towards making our agriculture little bit attractive at least to us, if not foreigners. Likewise, income tax incentives are provided for tourism industries established with an investment of Rs. 1 billion and above. Energy sector, mainly hydro power, has received serious attention of the government which is adequately manifested by concessions and support granted to investors in this sector. Hydro power projects to be completed by 2079/80 will get full income tax exemption for the first 10 years and 50 percent thereafter for 5 more years. In addition, once the generated power is hooked to the transmission line, a lump sum grant at the rate of Rs. 5 million per mw will be provided to investors. Those completing projects by 2074/75 will be entitled to additional 10 percent grant. It is hoped that these incentives will attract investors from within and outside of Nepal to help us do away with the torturous load shedding in a period of three years as stated in the budget. Let us also hope that Mahat while talking about installing a 25 mw solar plant in Kathmandu was fully cognizant of the failures of previous authorities on this front. A powerful prime minister soon after the first CA election had vowed to do away with power outage problem, declaring energy crisis in the country and importing diesel plants. His big talks, however, evaporated in the air when the concerned minister, belonging to another party, publicly voiced his opposition to any import of diesel plant to generate power.likewise, an elderly UML minister’s budgetary proposition that arrangements would be made to use only solar energy within Singhdurbar was dismissed as an impractical idea by no less a person than then chief secretary of Nepal government. The minister was also accused of not consulting the concerned officials of Nepal Electricity Authority while formulating energy policies. The ministry was taken away from him, saving him of further embarrassment. Hope this does not happen to Mahat who sounds very modest while announcing policies and projects for the current fiscal. The budget has also touched upon so called projects of national pride such as second international airport project and Kathmandu-Terai express way, which are likely to progress if inter and intra-party vested interests do not create impediments in selection of contractors and their agents in Nepal. On the whole, this is an implementable budget with modest targets on different sectors including the growth rate of 6 percent which does not look unachievable except for the monsoon predicted to be below average this time both in India and Nepal. Growth in Nepal is determined by performance of agriculture sector, more specifically that of paddy, which has a lot to do with timely rains in adequate quantity from the sky. In 2011/12, paddy production increased by 13.7 percent and growth was 4.6 percent, in the following year, a decrease in paddy production by 11.3 percent led growth to rest at 3.5 percent and in 2013/14, economy registered a growth of 5.2 percent on the back of a 12 percent increase in paddy production. Let us hope that any shortfall in rains would be made up by adequate increase in capital expenditure whose low level of utilization has seemingly attracted serious attention of Mahat ever since resuming authority at the ministry. Only twice in a decade has our economy registered growth rates above 5 percent, in 2007/08(5.8 percent) and5.2 percent in2013/14.Having been credited with these relatively satisfactory growth rates of above 5 percent at two different periods in a decade, he just could not afford to have a target below 6 percent for the fiscal 2014/15.Attaining a growth rate of 8 percent on a sustained basis to move Nepal up to the category of ‘developing nation’ by 2022 could be very difficult but 6 percent growth in the current fiscal year is definitely not unachievable. It may be mentioned that Arun Jaitely of India also could not specifically say whether it would be possible for them to achieve during the tenure of the current NDA government the average 8 percent growth gained during the past several years.

We have no choice but to carefully monitor the situation in India and formulate our policies taking full cognizance of market situation of different commodities, products as well as capital there because failure to do so can easily impact our small economy adversely. Let us cite the case of cigarettes excise duty on which has been hiked six times in India, while in Nepal thousand sticks will bear an additional burden of Rs.500 only, paving way for this item from Nepal to get into India.Likewise, reduction of tariff on import of ingredients used in soap making could lead to displacement of our soap by cheaper Indian products. The thing that we have to note and be serious about is that huge Indian economy can easily digest these kinds of aberrations that surface occasionally but in our case these can inflict injury on our economy, past experiences have shown this. Energy-hungry India and Nepal, lacking both capital and market, have no choice but to cooperate meaningfully on hydro power front. Learning from the past, we have to deal with India without compromising our national interest and without running away from dialogue and negotiations. Lucky Mahat’s modest budget has opened door for substantial inflow of both bilateral and multilateral funds in different sectors including harnessing of water resources. May Lord Pashupatinath bless Prime Minister Koirala with relatively stable health conditions enabling him to oversee and guide developments on the political as well as economic fronts for some more time. 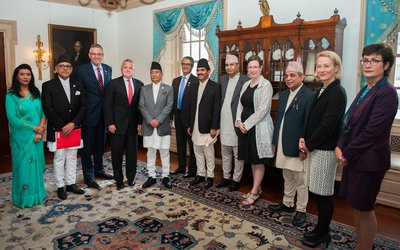 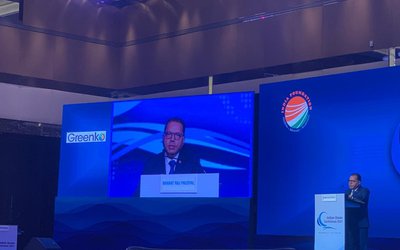 Plight Of A Tourist In US During COVID-19 By Dr Sanjaya Gajurel 3 days, 2 hours ago

Economic And Financial Assessment Of MCC By Ratna Sansar Shrestha 3 days, 2 hours ago