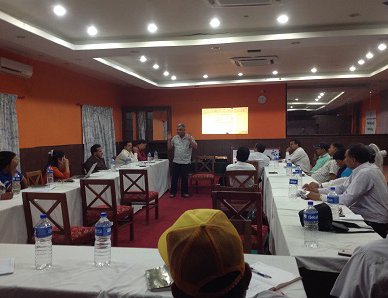 National Planning Commission (NPC), planning advisory body of government of Nepal, has been formulating development plans and policies of the country under guidance from National Development Council (NDC). As NPC explores and allocates resources for development activities as a central agency, it has the prime responsibility to facilitate the implementation of development policies and programmes and their regular monitoring. NPC serves as an institution for analyzing and finding solutions to the challenges of development stakeholders and civil society in the country. NPC has a mandate to approve national annual plans and programmes before their implementation.

NPC has been actively promoting the idea of mainstreaming DRR into development activities through its periodic development plans since its 10th Plan (2002-2007). The Tenth Plan focused on preparing the maps of the areas vulnerable to various disasters and integrate them into geographical information system for 20 districts and it aimed to formulate sectoral plans based on disaster risk reduction, both manmade and natural. Further, it aimed to have warehouses in all regions with adequate stock piled up. Another goal was to formulate laws related to fire brigade services and expand the services. The plan aimed to adopt strategy to implement the building construction codes applicable to both government and private areas. The plan aimed to prepare land utilization policy as well. After the completion of the plan, no significant progress was achieved.

The Eleventh Interim Plan2007-2010 was again focused in the area of Disaster Risk Reduction to integrate DRR into the development priority with focus on strengthening natural disaster assessment prior to implementation of infrastructure construction. The plan recognized the impact of water induced disaster and aimed to have its prevention strategy such as short term, medium term and long term programme. It envisaged updating and implementing the national building code. It also aimed to initiate seasonal weather forecast. The plan aimed to expand watershed management programme and services throughout the country with basin approach. The plan continues to aim to prepare land utilization policy. After completion of this plan also, no significant progress has been achieved.

Again the Twelfth Interim Plan 2010–2013,for the first time, proposed the way to incorporate national DRR into national projects, formulating policies, strategies and working policies. The plan envisioned to establish Disaster Resilient Community in Nepal with the primary objective to minimize the loss of humanitarian as well as properties from any disaster. The new plan priority was Enforcement of NSDRM 2009, improving coordination between government, non-government organisations and private sectors, awareness raising programmes, cluster approach and one door policy, mobilizing international assistance through NRR Consortium and encouraging new donors to engage in NRRC. This plan also focused programme and budget on DRM, provision of disaster risk assessment before infrastructure development, multi hazard risk reduction to be followed compulsorily for building construction in both government and community sectors, including school, hospital, government office of both government and communities, the concept of RSLUP and NBC compliance construction to be followed compulsorily in urbanized and semi urbanized areas. It was also focused improving EWS and developing new technology for effective information management on earthquake event, activating Nepal Platform on Disaster Risk Reduction Programme. This Plan also spelled out policies to address the DRR issues which were new legislation endorsement and its enactment, Warehouse and Regional EOC in 4 Regions and networking with NEOC. Implementation of 5 flagship programmes and disaster focal point system and its empowerment, EQ risk reduction programme, GLOF controlling program, District and regional disaster preparedness plan and its annual update, Climate induced disaster reduction programme, Post disaster  recovery programme, Upgrading of  the seismic measurement centres, Kathmandu Valley Earthquake Preparedness and Response Plan, NBC implementation in municipalities and urbanizing areas,  DM indicators in MCPM are the main policies during the plan period.

The Twelfth Three Year Plan and Thirteenth Plan emphasized disaster prevention and reduction to reduce possible risks of disaster and mainstream the disaster risk reduction in sectoral development policies and programs. Development of legal, policy, and institutional structures and enhancement of capacity of executing agencies and emergency preparedness and response to minimize the loss of lives and resources from disasters were other areas.

The Plan also focused on working policy for effective implementation. The major policies are before the implementation of any infrastructure development project, disaster risk          reduction evaluation will be conducted and the provision of compulsory requirement to adopt risk reduction measures will be strictly followed. The arrangements will be made to adopt compulsorily the multi-disaster risk reduction measures in the construction of any government and community buildings, including schools, hospitals, health posts and government offices. Emphasis will be placed on the use of traditional and modern technology in the areas of disaster management.           Formulation of risk sensitive land use plan and adoption of building code of conduct will be made compulsory in urban and urbanizing areas. The coordination and collaborative works among the government, non-government and the private sector will be effectively moved forward in the disaster management works. People’s awareness will be enhanced widely through informal and formal education, training and communications in the issue of disaster risk reduction. Effective implementation of Disaster Risk Management National Strategy, 2009, will be emphasized. Similarly international support will be mobilized through Nepal Risk Reduction Forum that has been agreed between the Government of Nepal and donor agencies. In this Work Forum the involvement of new donor agency will also be encouraged. Policy and institutional mechanism will be developed in a timely manner for disaster management. Programs addressing all the phases of disaster management like risk minimization and reduction, preparedness, disaster response and re-benefit will be prepared and budget will be allocated accordingly.

Further the Plan mentioned that arrangements will be made to ensure the welfare of the groups in high risks, including women, children, people with disability, and senior citizens in all the works of disaster management and the capacity of the agencies and human resources involved in disaster management will be enhanced and hence to make the coordinating role of the Ministry of Home Affairs more effective, its capacity will be strengthened. The role of the local bodies and communities in the disaster management will be ensured and their capacities will be enhanced. The Disaster Management National Work Forum will be made active. By ensuring the role of local bodies and communities in the disaster management, their capacity will be enhanced. Subject-wise approach and one window policy will be adopted in disaster response. The capacity enhancement of the agencies involved in disaster response will be emphasized. The use of new technology will be emphasized to develop more effective mechanism providing pre-information about the possible disaster and providing immediate information about the earthquake by making the forecast of weather and climate more effective.

The plan also includes other sectors, including water induced disaster, information technology, transport management, agriculture sector, food security, decentralization, self-governance and local development, health and nutrition, environment and climate change, population and health. Similarly, there are road and other transports,building, housing and urban development, science and technology and hydroelectricity. They include strategy and working policy to make them broader and more intensive.

Mainstreaming DRR and Its Implementation

Under the DRR and Disaster Management, efforts have already been made to raise disaster awareness among the people and provide training at the community level for effective disaster management. Action is also taken to coordinate with different stakeholders involved in disaster management and proper mobilization of non-governmental organizations in rescue and relief works. The operating strategy includes mobilizing internal and external resources for rehabilitation and reconstruction.  Formation of teams and their mobilization in disaster areas to assist in relief works and assess the damage, collect and analyze data, and disseminate information are other operating strategies.

One of the operating strategies includes carrying out rescue and relief work in disaster affected areas, protecting life and property and reducing their loss. To mitigate the suffering of people, implementing effective land use zoning, and preparing hazard maps of the disaster prone areas are other strategies.

Based on above policies and strategies, many of the village Development Committees have prepared village level disaster plan with the stakeholder consultation within the village and submitted it to District Development Committee for funding because the VDC has no such fund or resource for the implementation. Similarly District Development Committee also prepared District DRR Plan within the district following the guidelines of the planning process. Both VDC and DDC have no priority of DRR issues rather than other infrastructure such as road and drinking water. The policy level work has been done but the problems are implementation of such plans and programs at the grassroots level. So it will be better to have the mandatory provision to spend a certain percentage of the budget on DRR implementation. The problems of mainstreaming DRR are lack of coordination among the institution at the field level to national level. The responsibility of the Ministry of Home is to focus on response and recovery but preparedness part of the disaster or mainstreaming is in shadow.

The Ministry of Home Affairs distributes relief package each year to the victims as per the decision of Central Disaster Relief Committee to cover those who are affected from the flood and landslides and others disaster in the respective districts. The number of such victims is increasing day by day and victims consider that the government is not giving them proper attention. During the field observation last month, in Banke, Bardiya, Rukum, Dang, and other places, victims were getting Rs five thousand to hundred thousand on the basis of their family size only for quick relief. So it is better to have rehabilitation program in each district rather than distribution of package each year.

The National Planning Commission is in the process of coordination with the concerned ministries and its line agencies up to the local bodies through their respective plans and programmes each year. The Ministries are encouraged to incorporate DRR program more in the field level. However, coordination and resource gaps for implementation are the major constraints.  Many of the CBO's, NGO's and INGO's are focusing on support policies rather than implementation and some of those who are involved in implementation are also not cost effective and could not be a model of replication. The basic needs of the grassroots levels are ignored. Communities of the grassroots levels are the main drivers of the implementation but resources are hanging in between. So, neither people are benefited nor problems are solved.

This Is No Time For Complacency. This Is A Time For Continued Vigilance By Dr Tedros Adhanom 18 hours, 22 minutes ago

British Constitution During The Rule Of Padma Shamsher By Dr. Bipin Adhikari 5 days, 5 hours ago