The high commands issue edicts, and the rank and file follow. No question asked. 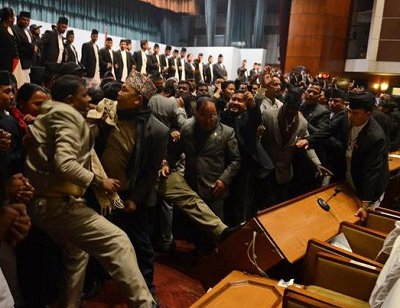 That the second Constituent Assembly was forced to postpone,for the first time, the deadline set for the promulgation of the Constitution did not come as a surprise. This was long predicted by many analysts, in their own language and with their own speculative instincts and biases. Most knew that the numerous, and almost irreconcilable,contrasting demands of political parties and sub-groups on many critical issues for inclusion in the constitution, as well as the scattered focus of decision makers to addressing them were not helping. Also, because of theomnipresence of a promisethat was self-imposed by the partiesto deliver a constitution within one year (January 22) hovering in the background, most expected that the squads led by the civil society in their varying forms and shapes, at an opportune moment,would be required to intervene and rescue themby facilitating the postponement with multiple pretexts of procedures. What, however, came as a surprise is the emergence of new sub-groups and alliancesfollowing the postponement, along with the already existing cacophony around thede factoextension of the Constituent Assembly, despite the numerous calls in recent months for its dismissal and replacement by an all-party political conference by many a powerful forces, and most importantly,by those originally asking for it as a sine qua non for a national political reconciliation.

The myriads ofjustifications for the above that are being invented and new proposals that are being elaboratedthrough the variousmass meetings atpublic halls and arenas from faces old and new are all noteworthy and curiously appear as a masterfully orchestrated team-exercise of camouflaging the lack of vision and inefficiency with a coat of colorful stories.

Yes the postponement was warranted ‘to save the people’s dignity’, ‘to write an even better social contract’, ‘to ensure an all-participatory exercise of people’s power’,‘to createa more noble and happy future’, and so forth, all provide reverberating recitals of the rationale. If, indeed, the overture of the plot of national polity was grandiose, the closing of the curtain for a recasting is no less interesting. But of course, detail never sounds divine, and that is where the devil is.

The high commands issue edicts, and the rank and file follow. No question asked. Thisblind obedience has never surprised any one since real deliberation on issues of substance, a basic tool for sustaining representative democracy, hashardly been a common practice amongst parties and, that too, without exception. The recent emotional outbursts and skirmishes not only in public places but also within the premise of the Constituent Assembly would, to a certain extent, support the above point.

What is curiously missing in all this, though, is a clear and unambiguous “joint apology”to the voters about the breach by parties of the collective promise; a promise that was made repeatedly, and strongly,despite the frequent internecine tussles, visible even to lay persons,which already hinted at difficulties and projected signs of failure.

Clearly, victimized by a sort of Frankenstein effect of their own initial creative proposals, party leaders,as confirmed bymost individual interviews,appear regretful in person, but show jubilation in their verbose in front of the masses and the media.May be a tactical discipline is being observed.Pointing to the west,and looking north, they continue to goeast. Somehow, the mystery of fateinfluencedby the chthonic forceshas brought the Nation to this conclusive juncture, perhaps not to the point ofno return, but certainly to the point of origin!

MIGRATION TO INDIA: March To Survival By A Correspondent Jun 20, 2021