Deuba has every right to claim that his visit succeeded in enhancing confidence between the two countries and that assistance will increase in Nepal’s important sectors such as energy, trade, connectivity, tourism for socio-economic development. 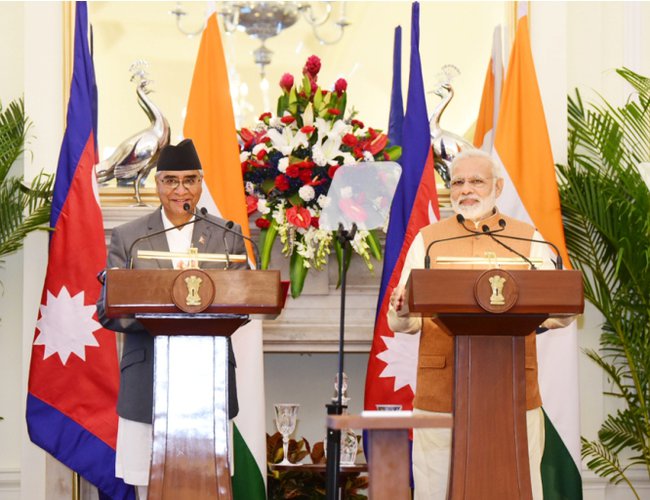 In keeping with the long established tradition and the announcement made soon after becoming head of the government for the fourth time, Prime Minister Sher Deuba visited India in August for five days at the invitation of his Indian counterpart Prime Minister Narendra modi.Since Deuba did not embark upon this state visit with some specified agendas in mind and people in general did not expect concrete output from this visit, it would be unwise to waste time talking about whether the visit was a failure or successful one. It was not different from visits of about four prime ministers in the last three years who like Deuba had talked about water management issues, increasing Indian assistance and speedy execution of projects signed in the past.Deuba has every right to claim that his visit succeeded in enhancing confidence between the two countries and that assistance will increase in Nepal’s important sectors such as energy, trade, connectivity, tourism for socio-economic development. Let us not forget that Deuba left for New Delhi just days after floods caused by torrential rains had wreaked havoc across the Tarai region, causing death of 135 people and affecting around 5 million men and women. It was natural, therefore, for him to apprise the Indian authorities, including chief minister of Bihar, of the damage caused by floods and share with us back home his success in persuading Indian authorities into forming a team of experts to address the same. When others in the past have claimed success, why Deuba should be barred from making claims on the strength of comparable outcome. People are still at a loss to make out who of the two ex-prime ministers (Oli and Prachada) improved the deteriorated Indo\Nepal relationship and who should the worsening of bilateral relationship be blamed on.

Deuba is also unnecessarily attacked by no less a person than his new-found political partner Parchanda that the former’s submission that ruling parties will introduce a fresh amendment bill in parliament was unwarranted. Dahal and many UML leaders are also unhappy that Koshi High Dam and Sun Koshi storage and diversion projects were included in the joint statement, despite the fact that there is no consensus at home on these two projects. In keeping with the deeds and observations of his predecessors and his own while on such trips to India before, Deuba was right in defending his remarks on the constitution amendment bill which he made in a joint press conference with his counterpart Narendra Modi on August 24.He is not wrong in thinking that he was right when he said that the government would try again to pass the bill which had just failed in the Parliament prior to his state visit. Why should he not get benefit of doubt when he asserts  that he has not compromised Nepal’s national interest.Anyway,signing of MOUs, reaching of understanding, creation of a positive environment and creation of a joint team of experts to look into problems are the rhetoric that people get to hear and read before, during and after such visits. Instead of blaming and accusing Deuba who is faced with a Herculean task of managing serious political problems at home, more meaningful would be to attract the attention of the concerned Indian authorities that avoidance of inordinate delay in implementation of joint projects is beneficial for both countries. They must have noted how happy people of Nepal were when Mr. Modi visited Nepal soon after his election to the position and announced the speedy execution of projects in which India’s funding was involved, including the much-delayed Pancheshwar multi-purpose project. People of Nepal have begun to understand that each prime minister visiting India talks a bit about national interest, basically for public consumption, and seeks special support for his party and blessings for himself and his faction within the party. With this knowledge at the back of one’s head, can anyone blame Deuba for crossing the limit? A careful and alert Deuba behaved and acted well while in India. Moreover, dignitaries on the entourage were attentively keeping an eye on Deuba lest he acts or utters something unpalatable or controversial. Jeetendra Dev,a minister on the entourage, shared his happiness with Nepal Telavision that everything went well during the visit, despite the fear many of them had deep within. Since all of us are very clear by now that no scene was created and no nonsense was spoken by our head of government while in Delhi, why should anyone delve much into this visit which was in no way much different from visits of our other prime ministers in the past. Let Deuba concentrate on domestic political and economic problems undistracted.

Ever since becoming prime minister for the fourth time, Deuba has been lobbying hard to get the Rastriya Janta Party (RJPN) on broad the ongoing election process two phases (local level elections) of which were held successfully without this party’s participation.RJPN and the ruling parties were seen sea-sowing a bit on amendment and election issues.RJPN,which was adamant about non-participation in the election without amendment, started showing some flexibility about participation in the remaining elections soon after a decision of the apex court paved the way for  adding local units in eight districts of Province- 2.This decision of the apex court coincided with the conclusion of RJPN’s seven-day-long marathon meeting. The party finally agreed to participate in the third phase of local polls scheduled for September 18 in Province -2, irrespective of the outcome of vote on the amendment bill. Expectedly, the constitution amendment bill was voted on and failed (August 21, 2017) as the ruling alliance could not garner 395 votes in the 592-strong Parliament. Of the553 lawmakers present, only 347 voted in favour of the amendment. Of the 39 lawmakers who were absent at the time of voting, majority were from the ruling alliance- NC and the Maoist Centre. The ruling alliance fell short of 48 votes to reach the required number of 395 votes to pass the bill.NC proceeded with the twin objectives of getting RJPN on board the election process and to expose those who are against the bill, thinking it would make some political capital placating the Madhes-centric leaders and inflicting political injury on its rival CPN (UML).It is,however,very difficult to say whether NC has made some political capital out of the amendment-related exercise because a  large number of RJPN leaders and cadre have unhesitatingly begun to express their unhappiness that NC was just keen about concluding the process but did not show the required seriousness to get the bill passed. They have also noted that NC could not get all its lawmakers to vote for the bill.Morover, UML has been very clear since long on amendment bill which has got to do with issues related to citizenship, language, etc. and thus whatever had to happen has already happened to UML.Therefore, NC has no chance of inflicting additional injury on the main opposition. Let us hope NC performs better in Province- 2 and makes up the loss suffered in the previous two local level elections.

The government has also ultimately conceded to the Election commission’s (EC) proposal that it would be very difficult to hold both elections on the same day as desired by Deuba and supported by other parties including UML.Backtracking on its decision of holding provincial and parliamentary elections at one go, the government has decided to hold two elections in two phases on November 26 and December 7, despite its previous decision to hold both elections on November 26.Prime Minister Deuba should not be blamed much for the flexibility shown in agreeing to the proposal of the body responsible for holding elections in the country if this kind of flexibility is not extended to other controversial areas. Let us believe that his act of installing a 50-member Council of Ministers, the largest ever in Nepal’s history, is meant, more than anything else, to ensure timely and desired accomplishment of major tasks that his government is charged with.

The Electoral Constituency Delimitation Commission (CDC) has also submitted its report to the government, expectedly late and after the dates for parliamentary and provincial elections were announced. The CDC has delineated 165 constituencies for the federal parliament and 330 constituencies for the provincial assembly. It is said CDC has given least priority to geography while fixing constituencies for the upcoming elections. Geography is not given due priority despite the categorical constitutional provision that geography and population should be the major bases for the purpose. The grumble is that only 10 percent weightage has been given to geography. On the other front, RJPN has lodged a protest with Deuba that the CDC has reduced the representation of Madhes while carving out electoral constituencies. The concerned leaders see this kind of act as a ploy against their party. The EC’s move of imposing election code of conduct for the provincial and federal polls has also been criticized by no other than Deputy Prime Minister Gachhadar, saying the poll code was imposed too early and it tied the government’s hands in the name of election code of conduct. Hope the government led by experienced Deuba wittily faces problems related to constitution and election that are likely to surface in a serious way before the provincial and parliamentary elections. Likewise, the economy that has been devastated by the recent floods and landslides needs proper attention so that it does not take a nose dive in terms of growth.

It is said that the flood and landslide damaged over 30 bridges, two of them irreparably, along the major highways. Six hundred big and small industries were shut after the floodwaters entered their premises in the Sunsari-Morang industrial corridor. A total of 43400 houses have been destroyed and 21000 families are still displaced. The total loss caused by the calamity in Saptari district amounts to Rs. 1.40 billion, show latest data available. The relief and rehabilitation work carried out by the government is slow and grossly inadequate. Likewise, it has been reported that floods and landslides triggered by heavy monsoon rains in Tarai have swept away planted crops worth more than Rs. 8 billion. In addition to this, available reports suggest that livestock and fishery have also suffered sizeable loss on account of this natural calamity. Paddy production is likely to decline this year as rice plantation was not satisfactory due to lack of rain initially and whatever was done, using extra efforts, was damaged later by the excess water that fell from the sky. Moreover, no encouraging reports are available on the budget implementation front. Having hit hard by the natural calamity and the government not being able to give due attention to increasing productive activities, the economy may remain far away from achieving the targeted growth of 7.5 percent this fiscal. One good thing  for the concerned authorities is that no matter how much unaccounted money is pumped into the market in an unproductive fashion during upcoming elections,inflation,currently around 4 percent, is not likely to cross the single digit level in the near future. Let us see if Deuba gets to report some encouraging facts on the economy by the time the elections are over and he embarks upon a campaign to become prime minister of this country for the fifth time.

The Impacts Of COVID-19 On Women-Owned Businesses By Novela Acharya 2 days, 8 hours ago