Why have you accepted “alien and imported” (to use the words of your founder the late PM KP Bhattarai) secularism of atheistic communists as well as republicanism and unworkable federalism, forgetting the “flower garden” nationalism of Prithvi Narayan Shah on which this nation was founded? 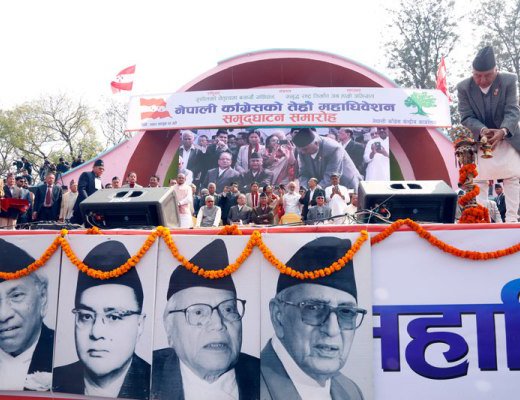 Judging from the wailing and gnashing of teeth among the Kangressi faithful, one would think Kangress is doomed, even though its vote share has not really declined significantly. They have only lost the game of electoral politics where a small margin of swing votes is all that matters; and that was sufficient to see most of their big leaders, especially those responsible for the 12-point Delhi deal, bite the dust. Oli and Prachanda with their grand Left alliance played that game masterfully, but given the flawed nature of the constitution where elected and selected members are put in the same basket, even the victors find that they have not really won. Indeed, they have not even been declared winners almost two months after being elected. Given that, to quote British PM Harold Wilson, a week is a long time in politics, already all kinds of shenanigans are in the offing and the much hoped for five years of stability that the voters hoped for is receding like a mirage. But to return to the breast-beating within the Kangressi ranks, the main question is: given the chronic and debilitating nature of the disease within the party, will this shock lead to its reform?

Eight years ago, on the eve of the 12th convention of the Nepali Kangress, I had penned an open letter to its participants in Nepal Weekly (of 5th September 2010). They never bothered to respond; but the questions raised in it continues to hang over the Kangressis; and unless they come forward with political honesty, they will continue to lose potential voters like me and that swing will be enough to consign them to the electoral outhouse. The main questions raised in the open letter were the following. Why did you dump the 1990 constitution you yourself crafted and on which you swore to abide by without an honest attempt to amend it? How can you continue to give lip service to BP Koirala’s democratic socialism Fabian though it might be, when you have gone whole hog for unbridled privatization and deindustrialization since 1992? Why have you accepted “alien and imported” (to use the words of your founder the late PM KP Bhattarai) secularism of atheistic communists as well as republicanism and unworkable federalism, forgetting the “flower garden” nationalism of Prithvi Narayan Shah on which this nation was founded? Why is your water resource development strategy Mughlan-centric and not Nepal-centric when it comes to projects like Upper Karnali, West Seti and Arun-3?

Why did you not only boycott local municipal elections called by the King in February 2006 but also asked the Maoists to assassinate candidates? Does that not make you as guilty of political murder and terrorism as them? Why did you handover innocent Kashmiri businessmen to the Indian police without due legal process when King Mahendra – whom you never tire of berating – did not handover the assassin of Punjab chief minister Pratap Singh Kairon until the solicitor general of Punjab came to argue his case before the Bagmati Zonal Court? Have you been unwilling to make public your party fund-raising only because the money you received is so dirty? Why have you failed again, first in 1990 and now in 2015 to reform the unsuitable Westminster model of parliamentary democracy to make parliamentarians good legislators and not bad executive ministers? While your potential voters are still awaiting answers to these questions, I raised them again in this very magazine on 17th March 2016 in an article titled “Can Kangress Reclaim its Soul?” Again, for a party claiming to be the vanguard of democracy in Nepal, its silence was deafening. However, now with the humiliating defeat at the 2017 polls, these uncomfortable questions are being picked up both from within the Kangressi ranks and from the outside. Recent soul-searching pieces indicate that these questions cannot be swept under the carpet anymore if the party is to rejuvenate itself.

Lokesh Dhakal is a relatively young Kangressi leader of the non-Girijangressi faction from north-east Kathmandu’s constituency #2. In late December, on the national reconciliation day commemorating BP Koirala’s return from Mughlani exile, he published a well-argued manifesto outlining what needs to be done to rejuvenate the Kangress. While a significant section of the document reads like a hagiography of BP Koirala – something that the younger generation is blasé about if not allergic to – he is honest enough to admit serious political mistakes made by Kangress since the 1990s. They include the party’s inability to stand up for nationalism and oppose the Mughlani blockade, something the UML cashed in successfully; its giving up of traditional values for questionable, communist-inspired secularism; its embracing republicanism without any debate or thought for its consequences for national unity; and its mismanagement of party organization and inner-party democratic life in favour of neo-feudal, kitchen-cabinet oligarchy.

While all these self-criticisms are welcome as a necessary start for Kangressi rejuvenation, Dhakal like many others of his kind still suffers from “fake news” propaganda generated by the Kangress itself. The doyen among diplomats, the late Yadu Nath Khanal once told me when we were part of an official delegation in Delhi in the early 1980s that propaganda is intrinsic to politics: the problem starts when you start believing in your own. He was referring to King Birendra and the decline of the Panchayat system that was underway: it today applies to the Kangress as well. How can they still call the Mughlani-tutelaged revolt of 2005/2006 a Nepali “peoples’ movement”? Other examples include calling King Gyanendra autocratic when he was constantly calling for elections to bring the 1990 constitution back on track; failing to admit that in 2002 a parliament with a Kangress majority was dissolved not by the King but by his own prime minister Deuba; King’s dismissal of a caretaker and incompetent Deuba when he failed to hold elections within six months as stipulated by the constitution that was welcomed not only by the Girjangressis but also the opposition UML and thirty other parties; asking for the resurrection of a parliament killed by the Kangress itself when its 5-year people-given mandate had already expired – these and many other uncomfortable questions will continue to haunt the Kangress unless and until it learns to exorcise these demons more honestly.

In the last few years, there have been a host of other ills that the Kangress must answer for. How did it promote its erstwhile student leader, the current incumbent head of the judiciary who has behaved so unbefitting of that high office in the case of Dr Govinda KC, the medical education reform crusader? Is not the current head of the largest and oldest university of this country that the Kangress promoted to that post a proven plagiarist who continues to be a member of the Kangress central committee? Are not three police chiefs sent to jail there because of senior Kangressi malfeasance in the Darfur scandal? Was not the disgraced head of the CIAA a Kangress-promoted character? Must you not take moral responsibility for such high crimes committed by those you promoted? Where was your BP Koirala-inspired democratic socialism when you headed the government multiple times over the last two decades even as you shut down and privatized functioning industries and as almost seven million youth of Nepal (a fourth of our population) continues to get proletarized in the global labour market?

In the current climate of Kangressi angst, aspiring Young Turks must realize that political leadership cannot be inherited or bequeathed: it must be earned. You must stake out your moral position and face the political heat. Promotion is automatic only in a bureaucracy where length of service and hardship postings count, not in politics. If you hope for such a promotion with the mantle of leadership simply falling on your shoulders, you are – to quote BP Koirala – not a political leader but a mere political bureaucrat, unable to inspire thousands of ex-voters like me to return and cast our votes for you.