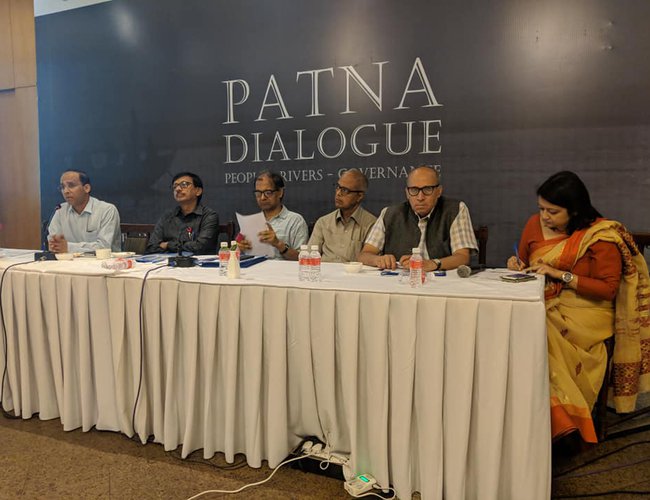 On 18 August community representatives from the Kosi and Gandak basin districts in Nepal and North Bihar gathered in Patna to discuss, deliberate and act on the existing state of floods, rivers and governance. The date of this collective initiative is of particular significance as it marks the 10th year of the unprecedented flood disaster that occurred on August 18, 2008 when the Kosi afflux bund breached, for the first time, in the upstream of the barrage, (all other seven breaches have occurred in the downstream). The scale of the tragedy and damage caused by the August 2008 floods as has been documented by many government and non-governmental organizations including in the minutes of the United Nations Office on Humanitarian Affairs 29 March 2009, has been the highest in the five decades of flood history in Bihar and Nepal. The 2008 floods and devastating impacts on poor people in India and Nepal undoubtedly have bereft people of economic, physical an emotional well being. The relief and rehabilitation works that followed the 2008 flood event in both the countries suffered from corruption and mismanagement and had been severely criticised by people and institutions in Nepal, Bihar and outside. The Kosi Flood Recovery Project has however been formally closed but the loss, sufferings, challenges for livelihood and shelter continue, leading to forced male outmigration and its direct social impact on women and children in India and Nepal until today.

Recalling what followed after the Kusaha breach of 2008, the community representatives from Nepal and India observed that over a period of last ten years (between 2008 and 2018) many layers or planned structural interventions in the name of development such as embankments, ring bunds, bridges and highways have been added at an accelerated rate to the existing regime of embankments without considering the well known ecological behaviour of meandering rivers that transcend from Himalayas. These structures hinder the flow of water thus accelerating the rate of silt deposition within embankments due to which the already embanked rivers such as Kosi and Gandak flow above the agricultural lands and habitations. These added structures have ensured that the natural drainage system of these rivers is completely blocked leading to permanent alterations in the landscape and creation of waterlogged areas for perpetuity. These developmental measures have thus made the inundation and water logging and associated disease and contamination of water resources a permanent element of the local landscape and enhanced the risks of many more disastrous breaches putting life and property at eminent risk. More serious are the concerns on the lack of any safety measures or monitoring mechanisms to keep an eye on the impact of these structures on the flow and behaviour of these mighty river systems, adding complexity to the upstream and downstream impacts of the Kosi and Gandak Projects. In addition to the issues of these two large river systems and the projects over them, transboundary conflicts between the upstream and downstream villages or boundary villages in Nepal and India were also discussed. The tributaries are part of the larger Ganges river system and have recently become a cause of concern due to changes that have occurred in the flow patterns and courses in these rivers.

The experts representing technical, scientific, academic, media and non government organizations viewed that the state of affairs on the ground suggests that no lessons have been learnt from the disaster of 2008 that left several millions homeless and resulted in the loss of thousands of acres of productive lands that were either washed away or converted to a desert landscape due to silt deposition. Given this scenario, many more Kusaha may be in waiting.

The joint ventures over international rivers shared by India and Nepal continue to attract curiosity and criticism in both the countries. The civil society in both the countries has been raising vociferous voice against many of these ventures and historically various people’s movements were shaped around the issues of land acquisition, rehabilitation, compensation and livelihoods thus questioning the fundamental premise of embanking and channelling the dynamic river systems. However, it is noticeable that despite very active social and political movements, no substantial changes were made in the scheme or design of projects and structures which are being continuously expanded until this day. After the Kusaha breach of August 2008, a flood of scholarship emerged evaluating the event from historical, technical, social, environmental and economic perspectives. While scholars and activists have discussed various reasons that were responsible for enhancing the magnitude and severity of the floods due to embankment breach, including the role of institutions involved in the management of the Kosi River not even one refers or analyzes the skewed regime of the Kosi Agreement, 1966 between India and Nepal under which the Kosi Project- the barrage and the scheme of embankments is to be repaired and maintained. While the victims of flood and their proponents questioned the accountability and responsibility of institutions for relief and rehabilitation post the event, the existence, performance, responsibility and accountability of institutions to take measures that could have possibly averted or mitigated the occurrence of breach has not been reflected upon sufficiently within the legal and institutional framework of the Kosi Agreement itself. Several commissions of enquiry including a judicial commission to examine reasons for breach were set up but due to lack of clear accountability mechanisms or lack of interpretational creativity of the Revised Kosi Agreement of 1966, no liability could be fixed. The Revised Gandak Power and Irrigation Agreement, however, does provide for liability and compensation mechanism in case a breach occurs due to negligence.

Presently, the existing formal water cooperation regime between India and Nepal does not provide any space for taking into account community concerns, needs and expectations from water resources development ventures. Almost all major rivers are covered under some form of legal agreement between the two countries, however, the regime is too project centric and excludes people and even the river itself from the purview of cooperative management mechanisms. Such regime clearly has not yielded positive results either in terms of estimated benefited that were projected to the people living in these basins or in enhancing the trust and goodwill that is needed to take the bilateral cooperation forward in all spheres of development, water being one of them. Clearly, there is a need for a new paradigm that argues for and paves the way for mainstreaming community concerns into trans-boundary water cooperation between India and Nepal.

Nearly two years back communities got involved in a series of comprehensive consultations on the trans-boundary governance of the Kosi and Gandak basins through a consultative tool called Gram Shivirs that sought to identify systemic, legal, institutional and procedural issues concerning the management of Projects and embankments along the Kosi and Gandak Rivers that need to be urgently addressed at the national and bilateral level by the Governments of India and Nepal. The Gram Shivirs led to a basin wide campaign for creating a vision for developing people’s transboundary agreements that can guide the governments on people’s needs and aspirations.

The Patna Dialogue in a way was aimed at attempting a synthesis to basin wide consultations that have happened with people in both the countries at the village, block and district level in Nepal and India. The key outcome of the dialogue was to launch a process to attempt people’s river basin agreements that would provide the template to the governments of both the countries for revisiting and improving the formal water cooperation in a way that is cognizant of the local realities, challenges and aspirations of people directly dependent on these rivers.

Koshi Victims May Have No Option Except Courts
Jan 15, 2019

Returnee Migrants In Pandemic By Sapana Phuyal 1 day, 8 hours ago

My Name Is CORONA By Hemang Dixit 3 days, 19 hours ago

Excessive Use Of Pesticides Increases Health Risk By Pratik Poudel 5 days, 21 hours ago