The victors gleefully shared the war booties: the Ottoman Turks lost their entire empire in the Middle East and the Germans, besides losing their African colonies, had to pay heavy war reparations that Hitler later used to drum-up German nationalism. By 1922 Imperial British India scaled down the war-time 59,000 strength back to 19,000 through massive demobilization with paltry remunerations. 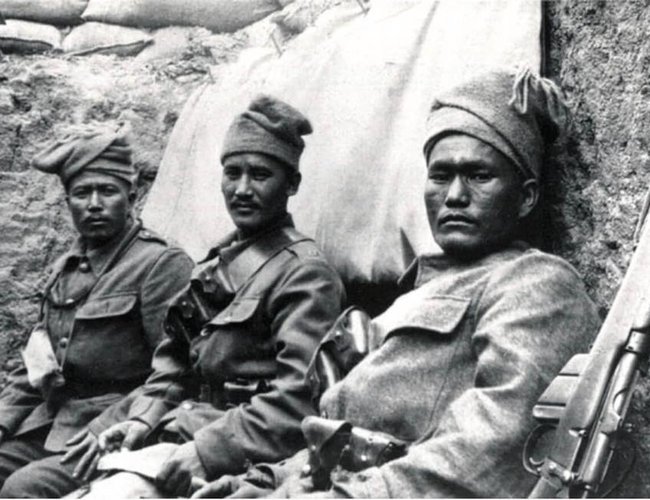 Foreword: The outbreak of the First World War in 1914 gave Prime Minister Chandra Shumshere of Nepal an opportunity to request[1] His Excellency the Viceroy of India and through him the King Emperor “…..the whole military resources of Nepal are at His Majesty’s disposal. We shall be proud if we can be of any service, however little that may be.” Thus, the Imperial British India’s 10 Gurkha Regiments comprising of two Battalions each, about 19,000 Gurkhas[2] in 1914, were on a turn by turn basis packed-off either to face the Germans on the Western Front in France or the Turks in Mesopotamia, Egypt and Palestine. The Nepalese army was sent to India to maintain peace there by garrisoning the cantonments vacated by their brothers in Dehra Dun and North-west Frontier. The powerful industrialized nations had modern war-machines and the use of heavy artillery, machine-guns, poison gases caused unimagined human carnages that the Americans would later skillfully coin the term “collateral damages”. Whether it be Gallipoli[3], Ypres, Givenchy, Festubert, Loos[4] or Mesopotamia, Palestine and Egypt, the Gurkhas were there, earning for the very first time two Victoria Crosses by Kulbir Thapa and Karna Bahadur Rana, both of the 3rd Gurkha Regiment. But with heavy collateral damages, the Imperial British India raised another Gurkha Regiment, the 11th, and had three Battalions manning each of these 11 Regiments. To maintain the Gurkha Regiment strength, “…. the whole country was quartered by Chandra and a new and intensive system of recruiting was put into force. ….. the number of men who actually left the country for all military purposes amounted to more than two hundred thousand …. In his (Asbahadur) village the women were doing the work, as they (men) were in France….. He only met old men and cripples and boys.”[5] Thus when the Great War ended, the Gurkhas’ strength had ballooned[6] to 59,000 by 1919. For a tiny nation with a 1911 census[7] population of only 5.6 million, this contribution of 200,000 young men meant 3.6% of her population. When the 1920 census was taken the population had consequently decreased to 5.5 million - a decrease of 1.1%.

But then after the Great War ended in 1918, what next? The victors gleefully shared the war booties: the Ottoman Turks lost their entire empire in the Middle East and the Germans, besides losing their African colonies, had to pay heavy war reparations that Hitler later used to drum-up German nationalism. By 1922 Imperial British India scaled down the war-time 59,000 strength back to 19,000 through massive demobilization with paltry remunerations. The official British figures of dead wounded and missing is given as[8] 24,000.

In Nepal itself, the aftermath of the Great War led to the following three important fall-outs that are still not discussed in a more coherent and thorough manner:

i) Collateral Damages of Gurkhas: Gurkhas, who were slightly wounded, were treated at hospitals in France or England and after recovery sent back to their regiments. But those who were seriously wounded were sent back to hospitals in India. General Baber Shumshere, second son of Chandra Shumshere and the overall Inspector-General of the Nepalese contingent in India, visited such a hospital in Dehradun and sent a report[9] of that visit to his father, Chandra. Baber saw soldiers with lost toes/fingers due to frost-bite, disfigured faces due to loss of noses and eyes, a forehead so badly injured that the eyeballs were protruding out like that of an unearthly creatures, another with a broken back moaning incessantly in pain. General Baber was constrained to write in his report “how could life linger on such desperate souls?” 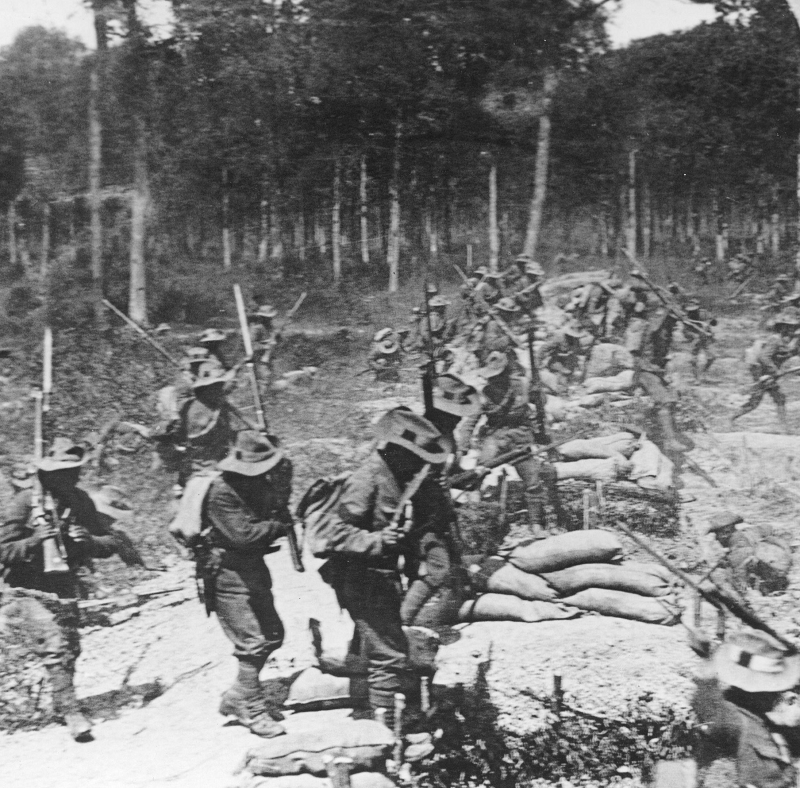 The impact of that hospital visit to General Baber was a change[10] in the business-as-usual recruiting strategy: “I would not like the idea of bringing together a good number of maimed, incapacitated men at a place like Dehra Dun where new recruits may be coming in. I am quite afraid that the sights of such horrors of war soon after their arrival in India might create an undesirable impression in the minds of the raw men.” Prime Minister Chandra, hence, issued[11] instructions to his son regarding transportation of incapacitated Gurkhas to Nepal: a list about the nearest relative of the incapacitated soldier and railway station nearest to Nepal border they would be handed over to, for the sake of convenience send them in small batches, Nepal to bear the entire cost of travels and per diem expenses – their daily allowances of one-fourth Rupees as pocket money! And after arrival in their villages, the responsibility to look after them fell entirely on the shoulders of the families. Chandra Shumshere simply ignored to do “however little that may be” either to these incapacitated-for-life soldiers or to the tens of thousand of her demobilized sons of the soil!

ii) Return of the Ceded Semeysur-Gandak River Territories – Annual Present of Ten Lakhs Rupees in Perpetuity: The astute man that he was, Prime Minister Chandra had something grand up his mind: he wanted to replicate his uncle, Jang Bahadur, who by providing military services during the 1857 Sepoy Mutiny had the 1816 Sugauli Treaty ceded territories of Naya Muluk (Kailali, Kanchanpur, Banke and Bardiya) returned back to Nepal. In fact, discussions were indeed held[12] between the Government of India and Nepal on "…..cessation of Semeysur range from the boundary pillar to the Great Gandak river. This move, in fact, consisted of moving the boundary pillar to Champaran which constituted the possessions of the Rajah of Bettiah and Ram Nagar.' However, “Samaya, samaya ke bat hai!” With the likes of Tilak Rao and Mohandas Karamchand Gandhi breathing down their necks, the British government backtracked and Lord Chelmsford in August 1920 wrote[13] to Maharaja Chandra "… clearly impossible that reward should take the form of restoration of territory previously ceded and the Government of India are therefore offering monetary present as the best available substitute in the circumstances." Thus resulted that famous "blood money[14]" offer of the annual present of ten[15] Lakh rupees in perpetuity for Nepal's services during the First World War.

iii) 1923 Treaty of Friendship with Britain – Absolute and Unequivocal Independence: Disappointed with not being able to recover the ceded Semeysur-Gandak territories, the shrewd Chandra, however, did succeed in having the Treaty of Friendship signed with Britain in 1923. Through this treaty, the British government acknowledged the “absolute and unequivocal" independence of Nepal. The British envoy, Lt-Colonel WFT O’Connor, who signed the Treaty on behalf of the British government reiterated[16] at the ceremony “…. In proportion to the resources and population of the country, it compared favourably with the effort of any of the Allies ……. no less that two hundred thousand, or nearly one quarter of the total of those who, by any stretch of the term, could be called the fighting classes of Nepal, served in some capacity during the War.” That is why the erudite scholar, Dr. Harka Gurung, did not fail to point out[17] that “One of the reasons why the British recognized Nepali sovereignty in 1923 (Treaty of Friendship) was the valuable service rendered by the Gurkhas in World War I.”

Gifted by Britain in 1925, the old Military Hospital (now the brand-new colonial style Tri-chandra Military Hospital) at New Road in front of Mahankalthan, symbolizes the relic of that era with the following touching words inscribed below the statue of a Gurkha soldier, that still stands:

To the Glory of Sri Pasupatinath

And to the Memory of those Brave Sons

Of the Kingdom of Nepal

Final Words: Yet to mark the centenary of the end of First World War in Paris on 11th November 2018, while 70 Heads of State (including those of warring parties Germany and Turkey) were present, Nepal preferred to send her bureaucrat[18], Foreign Secretary Shanker Das Bairagi, to that ceremony. Ashamed[19] of the sacrifices made by 200,000 brave sons of the Kingdom of Nepal, the Democratic Loktantrik Republic Government of Nepal even refused to celebrate the centenary day. However, just across the border, Republic India’s Prime Minister Narendra Modi, while celebrating the occasion with a Scottish piper playing at the Delhi War Cemetery decked with marigold and poppy flowers, tweeted “…..our soldiers fought world over, just for the cause of peace.” India is not ashamed to have contributed 1.3 million soldiers to the Great War from where 74,000 never returned. Winston Churchill is credited to have said, "A nation that forgets its past has no future." Is that the direction we all Nepalese are heading to? May Lord Pashupatinath protect us all!

[3] 29th Indian Infantry Brigade (1/6th Gurkha Rifles, 14th Ferozpore Sikhs, 69th and 89th Punjabis) arrived in May 1915 at Gallipoli [Gelibolu in Turkish]. General Sir Ian Hamilton, C-in-C Mediterranean Expeditionary Force and operations on Gallipoli. At the Krichia battle, while the 14th Ferozpore Sikhs were decimated, the Gurkhas also suffered extremely heavy casualty. Peninsula felt ‘it might be inadvisable to employ Mohammedan troops in this theatre’ – against the Muslim Turks. So the 69th and 89th Punjabis were withdrawn and by a strange quirk of fate the three Gurkha Battalions (1/5th, 1/6th and 2/10th) faced the indomitable wrath of the Ottoman Turks at Gallipoli. Over 700 New Zealand soldiers were killed in a single day!

[14] The words used by Bhubaneshwar Khatri, who later became the Auditor-General, relayed to the writer by a government colleague of his when he and Khatri were preparing the deparmental budget at the Finance Ministry.

[15] Ibid footnote 1. During the Second World War, Prime Minister Juddha Shumshere had this amount increased to Twenty Lakhs per annum. Dr. Ram Saran Mahat, while he was the Finance Minister, had this amount casually “capitalized” at Twenty Five Lakhs.

[19] Nepal’s Foreign Policy in the Changed Context Report of 2068/2011 by Nepal’s Legislative Parliament on International Relations and Human Rights Committee, chaired by Padma Lal Bishwakarma, stated: The Gorkha Recruiting Centre did provide an opportunity to the youths with small employment but service in foreign armies has always made the nation lower her head.

Pun is a former MD of NEA