A Male Perspective On Feminism

Gender equality in the family reduces divorce and depression, making them happier and improving the living standard of the individual. It is crucial that men stay as part of the feminist action. For feminism to achieve the goal of women's liberation, men must participate in the struggle. Indeed, men bear greater responsibility for ending the oppression of women because they are the patriarchs of the main perpetrators of that oppression. But can men do so to become feminists? 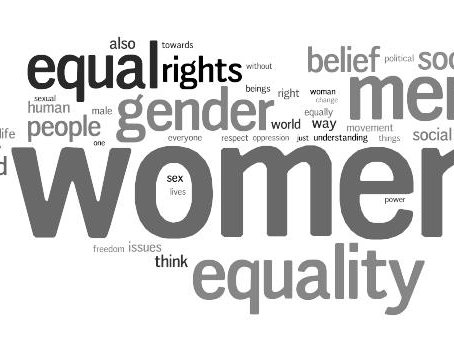 Feminism is a socio-thinking movement that emerged as a response to oppression against women as indicated by discrimination, marginalization, and violence. The awareness on gender inequality arose

from the perspective of patriarchy, that has led to gender-based violence among the greatest victims, the women, who are an important part of the feminist movement agenda. Therefore, feminism seeks to free women from all forms of oppression, injustice and gender-based violence that factually more women become victims in today's world. Therefore, I also call the movement of feminism as a women's movement or gender justice movement.

I was born as a male and the automatic roles, identities, and myths embedded in patriarchal culture have not completely disappeared from me. Although I wanted to train myself to be a fair feminist, it turned out that the misogynous spell has left its footprint on my brain. But when the superior pretense seems to arise, I always try my best to deconstruct the thought so that it does not come into being. Feminist practice for men seeking gender-consciousness is a very clear challenge; he must always be ready to defeat the possibility of the birth of patriarchal culture to set on his mind and his misogynous behavior. This practice must continue until the doctrine of misogyny has completely lost its essence.

Gender equality in the family reduces divorce and depression, making them happier and improving the living standard of the individual. It is crucial that men stay as part of the feminist action. For feminism to achieve the goal of women's liberation, men must participate in the struggle. Indeed, men bear greater responsibility for ending the oppression of women because they are the patriarchs of the main perpetrators of that oppression. But can men do so to become feminists?

Men in the patriarchal system cannot distance themselves from their power and privileges over women. To be a feminist, a person must be a member of a given group (of women), not only because of classification but also considering their direct experience in theory and practice. Feminists are no longer just women who do not shave their armpits and put their bras on fire. As a contemporary feminist, you can be a woman, a man or someone in between. Yet, men still shy away from speaking much about this subject.

Imagine someone asking you the question: Are you a feminist? How do you respond to it? And would you add that being a feminist means you believe in gender social, political and economic equality?

Certainly, men can be feminists, and more and more people share the feminist ideals. If we look at the feminist label, which is complemented by the definition, it is not that surprising, since every man is somehow bound to a woman, as their mother, wife, girlfriend, daughter or co-worker. In the mirror of a personal relationship, we often see things in a different light.

Building a feminist coalition with both female and male activists is crucial to strengthen men's involvement in eliminating discrimination against women. A gender-sensitive male coalition will be significant in binding their commitment to consistency and commitment in the effort to eliminate all forms of gender discrimination and injustice.

Nowadays, anything is viral. The one who looks, sells, and everyone follows him. But sadly, some institutions and people have used the word feminine as a weapon for their interests. In almost every advertisement or film, women are presented as a sex symbol, and these symbols become the prototype for the female population, who unknowingly, take them as the embodiment of womanhood.

Feminism does not mean that you threaten men, hate them or compete with them. Femininity, without men, is incomplete and man has to renounce the ego of his masculinity and move forward, not in front or behind the free woman, but together, matching each other's pace.

Men are half a part of human society and we cannot expect them to be respectful towards the opposite sex by showing them unrestrained propaganda. You have to evaluate each person separately and avoid abnormal gender perceptions. You have to understand that every person has a separate stanza, whether it be a man or a woman, and everyone is important and beautiful in its singularity. Thus, all people around you are duly potent.

Nobody should be the master of another person, should have the right to beat another person or to identify his own gender or sexual orientation, And no-one should have right to special privileges on the basis of his gender configuration. How many feminists do you think are fighting for equality? How many men prefer to define themselves as egalitarian rather than feminist? That feminism is defined by equality is something universally recognized. However, the term 'equality' has never received an adequate analysis.

I am a feminist and I do not fight for equality, I fight for liberation. Those people who consider themselves to be the champions of equality are shielded by rather tepid feminist principles such as equal pay, equal opportunities without unequal treatment or positive discrimination, the individual as the sole responsible person for the failure and, above all, the adaptation of women to the current labor hierarchy, where the job comes first. Equality takes the male status quo as a standard that women must attain.

Men control the balance of power and this power is distributed in a harmful way and is used for even worse purposes. Change can only come when we redefine and redistribute this power, eliminate these hierarchies and reevaluate the standards that men have predefined. Feminism did not arise, nor does it serve today to claim rights for all. Feminism is a movement that was created to fight the inequalities that women suffered from with respect to the privileged dominant sex- men!

This assertion, that feminism should not be called feminism, but equaliism, humanism, or any other -ism , is used by those who consider that to claim the rights of women is discriminatory with respect to men. Those who say this think that a movement that claims only the rights of women is to give an advantage to women, or is giving way to men when it comes to claiming rights for people.

Gentlemen, the goal is to avoid violence towards the two genders, to allow sons and daughters to dream, struggle and give them the right to be ambitious, to be happy, without fear of being judged, for wanting to make this world a better place to live in. We want equality, neither more nor less.

This is a Hindu society where women are worshiped like goddesses while they feel helpless. In the Vedas, the woman is said to be a mother, which means that the person who gives birth also brings nourishment. Definition of women's empowerment is wrong.

As long as one man marries many women, as long as the capable woman continue to consider their right to ask for a sick person to leave the seat in bus or trains, as long as a man will continue to look for beauty in a woman, as long as a girl chooses her life partner based on his income, as long as hostility breathes between a daughter-in-law and her mother-in-law, feminism will exist.

I consider myself a feminist because as a feminist, I consider equality in all spheres of life. I am a person who believes in the power of women just as much as they believe in the power of anyone else. It is equality, it is fairness, and I think it is a great thing to be a part of