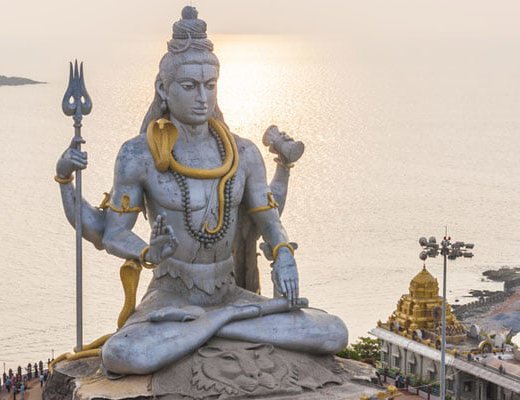 Many years ago I read a book by Thorne Smith titled ‘Night Life of the Gods’. It was about Greek Gods and was hilarious. It made me think about our religious texts and to wonder how our own Gods in this side of the world have been portrayed.

Of course our Vishnu avatar is supreme and being a composite deity is said to even include Shiva within himself. This is the image that Krishna shows to Arjun during the course of the Mahabharat war. However Krishna himself has been portrayed as a prankster from his early age as he indulges in hiding the clothes of the gopinis and harasses them. During the course of the holy war Krishna enabled the Pandavs to win by simulating an eclipse of the sun, making thus a premature nightfall and lulling the enemy to thinking that the day’s fighting had ended.

Shivaji who is also known as Bholenath is supposed to be easily pleased but at the same time has been depicted as a God who gets angry easily too. He is supposed to be childlike and soon pleased. To illustrate this aspect, the story of Bhasmasur is narrated and it was ultimately Vishnu who saved him from being destroyed. Shiva is known as Mahadev also but the image that we in Nepal conjure up with is that of Lord Pashupatinath or Lord of the Animals. Though Shivaji is associated with the use of Cannabis, a claim has been made by some people that the ‘Soma’ mentioned in our scriptures was in fact Cannabis! Not everyone agrees on this point.

The Kumbha Mela started on 15th Jan. 2019 at Allahabad or Prayagraj. as it is now to be called at the confluence of Ganga, Yamuna and the mythical Saraswati. One wonders why the original name of Gaya was not chosen. This festival which is held every twelve years will last for forty-nine days and many devotees will go there to bathe and do sharadhas and pujas for the redemption of the souls of their ancestors.

As the time of our own festival Shivarattri is drawing near, it is customary for our government to provide ganja to the many sadhus to do darshan of Lord Shiva at Kathmandu. This will be done this year in the first week of March. Finally as in the past, the sadhus will be provided money for their return journey back to wherever they came from. It has been customary also for many of our locals to visit the environment of the sadhus at Pashupati, with the ostensive intention to take of the ganja, as the prepared chillum is passed around from hand to hand. In fact, a number of bhajan mandalis in this land of ours and still sticking to their traditions of passing the chillum around.

Cannabis sativa is said to have three subspecies and is an indigenous plant of Central and South Asia. A non drug form of it is known as hemp and its fibres, seeds and oils are used as non drugs – hashish and its oils also. It has manifold usage, its leaves being eaten as vegetables and its cultivation is said to increase soil fertility. The fibres of the plant last long and do not decay when it is immersed for long periods in water. Other uses are as fabric, ropes, and because it resists fungi it has been used as eco panels for prefabs. It has been used too for medicinal plus also recreational purposes and this has drawn the attention of the world. The famous Harrison Ford in 1941 even made a prototype hemp car and ran it on hemp-ethanol! An item of interest is that some beer manufacturers of Western countries see investment in Cannabis originated products as a direction to take.

An English language Kathmandu daily of 27th Dec. 2018 had the news that the Thailand National Assembly had passed a bill allowing the cultivation of both marijuana and kratom, a Thai medicinal herb for medical purposes. The same issue of the newspaper had another news and photo showing Nepali policemen destroying marijuana crops at Dambarpur in Nijgadh Municipality of Bara. As a matter of fact, Israel was the first in Asia and South Korea in East Asia to also pass similar bills recently.

Cannabis for medicinal purposes has been legalised in Australia, Belgium, Canada, Netherland, Spain and many US states of which Colorado was the first. It is said to be very beneficial to patients suffering from multiple sclerosis, Alzheimer’s disease, rheumatoid arthritis, epilepsy and at some stages of AIDS.

Our problem in Nepal is that a significant number of our young persons are already hooked on to or addicted to various substances abuse. This range from speed drugs, codeine cough preparations to various balms and what not. There is the possibility that the legalisation of cannabis may make it the starting point for Nepali youths, instead of the existing present easy abuse of alcohol. There is no age bar for the buying of alcohol and it is necessary to have some restrictions on the availability of this and cannabis. Many rehabilitation centres already exist but the functioning of many is not beneficial to the inmates. Looking at the managing efforts for the opiod addiction in Canada and US one realises the magnitude of the problem.

Cannamis was in fact legal in Nepal till 1973 when US pressure made it illegal. If this is to be reversed, what then there must be massive awareness campaign to make the public aware of its hazards too? The worrying point is the implementation and success for such campaigns for in spite of similar actions about the hazards of smoking and alcohol, these two items continue to be still widely used. The government, not only in Nepal but in many parts of the world will be loathe to totally ban the consumption of both items as there will a substantial drop in the government’s income. The question for us Nepalis is simply, “Ke Garne”?

Why Is The Stock Market Price Rising Despite The Covid-19 Pandemic? By Shanker Man Singh 13 hours, 50 minutes ago