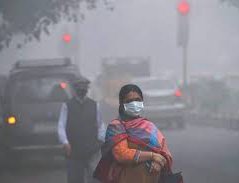 Despite a light drizzle, the air emergency continued in Delhi on Sunday morning as a thick layer of smog engulfed the city with the air quality index (AQI) reaching 473 at 9 am, according to Central Pollution Control Board (CPCB) data.

The air quality at most monitoring stations on Sunday morning was in the ‘severe’ category. At ITO the AQI levels were 488, while at Anand Vihar and RK Puram the levels were 483 and 457 respectively as the national capital continued to grapple with its annual nightmare.

The brief improvement on Saturday, with the overall AQI of the city settled at 399, in the ‘very poor’ category, did not last long and after 9 pm on Saturday the pollution levels started rising again. On Friday, Delhi witnessed the worst air in two years with the AQI being recorded as 484, the worst since November 2017 when it was 486.

“By 8.30 pm on Saturday the wind speed had dropped to around 6 kmph. As the wind speed dropped, pollutants again started accumulating,” said a senior official of the India Meteorological department (IMD) explained.

An increase in wind speed and sporadic rain in some parts of Delhi and the national capital region (NCR) had helped bring air pollution out of the “emergency” status on Saturday, but weather officials and meteorologists warned the crisis is not over yet.

On Friday, the Supreme Court-mandated Environment Pollution (Prevention and Control) Authority (Epca) had declared a health emergency and directed a slew of measures, including shutting down of schools and a complete ban on construction activities in Delhi and the neighboring satellite towns until November 5.

The situation is expected to remain grim as the period till November 15 is vulnerable to a surge in air pollution because smoke from farm fires in the neighboring states of Punjab and Haryana settles over NCR and adjoining regions.